Father’s Day in Australia was on September 2, and it’s a day a group of miners from “down under” won’t soon forget.

The Beta Hunt Mine was producing nickel in an on-again, off-again story that dates back to an initial discovery in the area by Western Mining Corporation back in 1966. The Beta Hunt nickel deposit was subsequently sampled by drilling in 1970, and the first ore production began in 1974. Located in Kambalda, Western Australia, which is about 40 miles south of Kalgoorlie and southeast of Coolgardie, the operation focused on a flat-lying nickel deposit when it officially opened in 1973.

The first major gold deposit was found and exploited in 1978. There are nine other nickel mines and two dozen gold mines within 40 miles of the Beta Hunt Mine.

The mine changed hands several times and was placed in a care and maintenance status back in 2008 when metal prices made the project no longer profitable. In a rather unusual situation, nickel and gold rights were separate. In 2013, the mine was acquired by Salt Lake Mining Pty Ltd, and they acquired both the nickel and gold mining rights. Salt Lake Mining was a private company that was later acquired by Royal Nickel Corp. out of Canada.

Nickel ore is transported about three miles and processed under contract at a facility owned by BHP Billiton. Gold ore (minus any gold specimens) is processed by another company at a facility about fifteen miles away.

Let’s get through the technical part. According to their NI 43-101 technical report published in 2016:

Beta Hunt is situated within the central portion of the Norseman-Wiluna greenstone belt in a sequence of mafic/ultramafic and felsic rocks on the southwest flank of the Kambalda Dome. Nickel mineralization is hosted mainly by talc-carbonate and serpentine altered ultramafic rocks. The primary sulphide minerals are typically pyrrhotite > pentlandite > pyrite with trace chalcopyrite. Gold mineralization occurs mainly in the Lunnon Basalt, which is the footwall to the nickel-bearing ultramafics, and is characterized by intense albite, carbonate and chlorite alteration, with a halo of biotite/pyrite alteration. 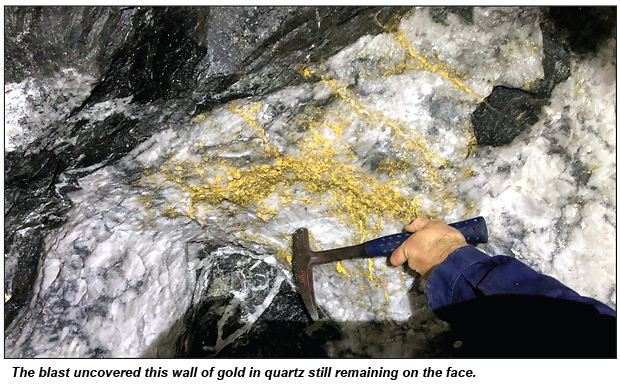 It’s a lode (underground) mine with dozens of levels and stopes, but the miners were focused on the 500 meter (1,640-foot) level denoted as “Level 15.” Drilling had indicated there was additional gold there, but the miners had no idea of the magnitude of the deposit they were about to uncover. 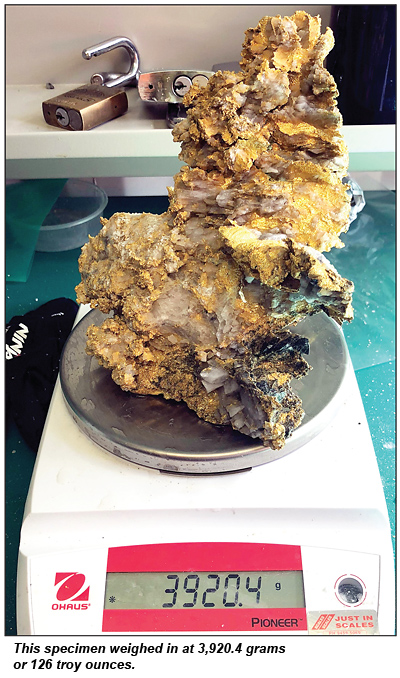 Henry Dole has been an airleg drill operator and blaster for sixteen years. He set off a blast that broke up an area of about 9’x9’ on Level 15. When he returned for his next shift on Father’s Day, there was “gold everywhere. There was chunks of gold in the face, on the ground; truly unique, I reckon. I nearly fell over looking at it. We were picking it up for hours.”

The discovery zone was initially fenced off and locked up. Armed security officers were brought in and additional surveillance set up as the large gold-quartz specimens were moved from the mine site to the Perth Mint. A few smaller pieces had fallen off a truck and were recovered from a gutter after the parking lot was cleaned and inspected.

The company stated the updated estimate includes additional in-process material from the site of the blast, and coarse gold and gold-quartz specimens recovered from the expanded development area. All of the high-grade coarse gold is being processed by the Perth Mint, which has also reported more ounces than original estimates.

The company admittedly had been struggling a bit to keep the mine open prior to the discovery of the Father’s Day Vein. Their stock price fell from a high of US$0.68 per share in April 2014 and bottomed out at US$0.05 per share in August 2018. The company was in negotiations with a possible buyer. Although Royal Nickel is still considering a sale, the company will be considering other options after the latest developments. The price per share is currently US$0.43 at press time.

Initial plans are to auction off many of the specimens later in the year, after the company has a chance to exhibit them. 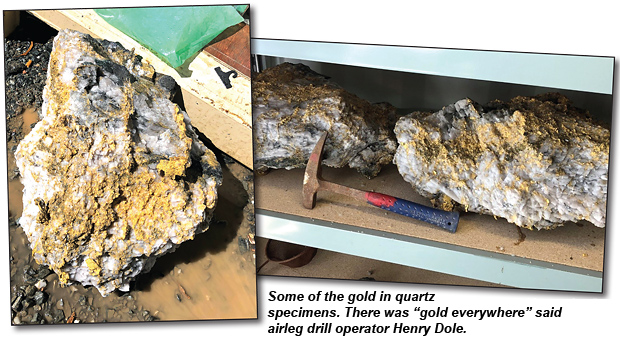 “We’ll be taking them around the world and as we’re doing that we’ll be hosting investor functions and collector functions, that whole promotion part of it and highlighting what a tremendous discovery it is,” said Selby in an interview with The West Australian.

Preserving the True History of the Ivanhoe


My partner had the contacts and it wasn’t long before we had an agreement in place and the company had a geologist on site. I recall a time when he was getting the lay of the land, so to speak, and he broke off a rock sample and inspected it with his magnifier.

February 2013
After your excitement peaks when you first receive the high gold assay from the vein you just exposed, you ponder how you will extract and sell your gold. You will need to develop a flow sheet for your process to optimize your recovery and minimize your costs and permit requirements.

The favorable geology of the northeastern and central parts of the Seven Troughs Range are the parts most interesting to prospectors. They are underlain by a thick sequence of Tertiary volcanic rocks, mostly rhyolites and andesites.

The Basics of Crushing and Milling Operations

In processing gold, silver and other valuable ores, the minerals containing the values, such as metallic gold, silver-bearing sulfides or other minerals, must be freed from the surrounding host rock before those valuable minerals can be captured.

I am going to suggest dozens of ways you can increase suction power, dredge to greater depths, and improve recovery methods in your sluice box.

Getting Into Hot Water While Reclamation Dredging

Once I started dredging with heated water pumped into my wetsuit, I never went back to not having heat except late in the summer when the water is very warm.