Q: Hi Chris. I really enjoy your articles on small-scale hard rock mining in the ICMJ. I live in Southern Oregon and I enjoy metal detecting and prospecting for gold in my spare time. The area I live in is considered pocket gold country and so I always hold out hope of finding a nice-sized surface or near-surface pocket someday.

You’ve mentioned the difficulties encountered by individuals or small groups in trying to process their ore. I was wondering what your thoughts were on finding a near-surface pocket of free milling gold like what is sometimes found around my part of the country. Could something like this be relatively easy to process by crushing and using gravity separation? From there could I then sell my concentrates to refiners that advertise buying placer gold since it would be similar if it was free milling? I’ve also come across a company advertised in ICMJ called TCB Metals and Refining. It looks like they do quite a bit of processing of concentrates. I wonder if they deal with small-scale miners? Anyways, I just wondered what your thoughts were on this. Thanks for any info.
Jamey 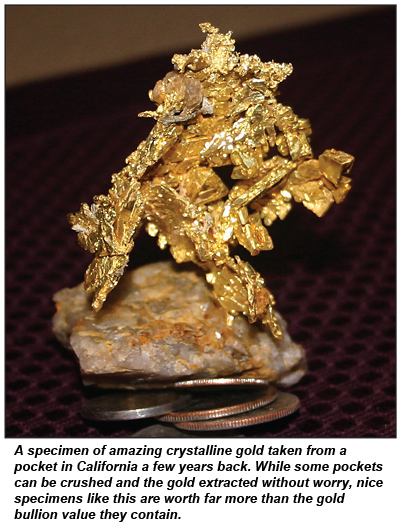 A: The truth is that most gold pockets are sort of small, being a few pounds to perhaps a hundred pounds. Yep, larger pockets are found sometimes, but the vast majority of them are on the small side. Still, even a pocket of a few pounds in size can contain a lot of gold. If you find something that is only a couple pounds, you can crush it yourself in a mortar and pestle. It is fairly easy to process. You then pan away the quartz and other rock and save the gold, which can be shipped to a refiner. If you find something that is, say five pounds to a couple hundred pounds in weight, I’d purchase a crusher and still do it myself. In that case, I’d still recover the gold by careful panning. If you are lucky enough to come up with something more than 100 pounds, I’d buy a crusher and some sort of recovery device, maybe a concentrating table. I’ve never found a big pocket, but I own two crushers, one for the bigger rocks and one to take the material from the first crusher and reduce it to powder.

The other thing to consider is the potential specimen value of your finds. I know a guy who hit a pocket in California and once he washed off the loose dirt and clay, the whole thing probably did not weigh two pounds. Still, the gold was spectacular and beautifully crystalline. He sold a number of the pieces for much more than the bullion value of the gold. One piece he showed me would have had a retail value approaching $10,000 even though it was only a couple ounces of gold. Sometimes pocket gold can be ugly, but sometimes it is spectacularly beautiful.

I don’t personally know anything about TCB, so I cannot tell you anything about their services. To find out, you’d need to contact them directly. I will say that shipping ores across several states can be pretty expensive, so no matter what they charge you, you will have to cover that expensive shipping charge in addition to their processing and refining charges. You need some pretty rich ore to ship long distance, and that is why most individual miners choose to process their own small lots of rock.

December 2013
Why are there no maps of the so-called mining districts?

February 2016
Designing my own dredge...

August 2013
Q: Will my detector react to fine gold?

March 2016
Estimating the gold content of ores with gold, quartz and other minerals?

Ask The Experts - Should I be focusing on uranium and thorium?