This is the story of a nugget patch I’ve been working on that is a bit unusual. I won’t be telling you where it is located, but I will tell you how I found it and how I’ve worked it. I think that may provide you with some useful information that may help you in your own prospecting.

A few years back I was reading an old California State Mining report and came across a mention of a prospect where a few brothers had dug some prospect holes for a hard rock vein and found a bit of coarse gold both in the quartz and in the soil. It sounded interesting to me, but the location given in the report was a little vague. I studied the geology map for that area and decided on a spot I wanted to try.

I went up there and explored the area. I saw no indication of any prospect pits or outcropping quartz veins—at least nothing that was still obvious a century after the brothers had been prospecting here. There were chunks of quartz on the ground and the report said they had found gold in the soils, so I decided to give my metal detector a try. The area had been logged, so there were steel cable strands in the soil and a few scattered bullets. A day of prospecting yielded no gold. That was enough for me, and I did not return for a couple years. I was discouraged by what I saw. I didn’t know if I was in the right place and nothing I saw seemed very prospective anyway. 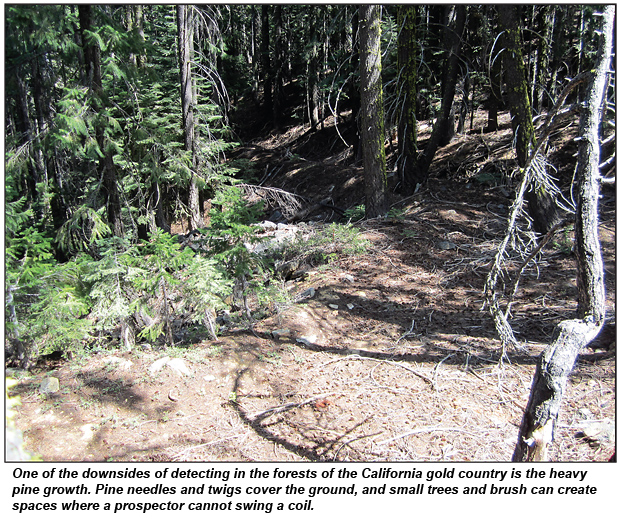 This place is the middle of nowhere as far as gold mines and nuggets are concerned. It is just the flat top of a mountain in a forest area. There are chunks and pieces of vein quartz all over the ground, but while it’s a positive sign, it’s hardly a guarantee. There are loads of places with quartz all over the ground and no gold; I’ve seen a bunch of them. There are no old timer workings that could act as a guide here. I needed to figure it all out for myself. Additionally, there are no other mines nearby, just one area where the old timers had taken some residual gold by ground sluicing about two miles away. After a day’s prospecting, it just did not seem like as good a place to find gold as I had hoped. The lack of old workings to guide me made me doubt I was in the right place, and I didn’t know if I could even find that right place with the vague description I had.

A few years passed. Last year, armed with a new and more powerful detector, I returned to give it another try. I decided I would focus on a slightly different area nearby where I had detected before. It was maybe one-quarter-mile from where I searched the first time. I still found the same old steel cable strands and bullets I had seen before. However, about an hour into my hunt, I found a nice little half-gram nugget about five inches deep. A few minutes later and about ten feet away I found a second nugget of about the same size.

Things had changed and I was now very excited! Two nuggets just a few yards apart could point to a nice patch. I realized this was a place no one had ever prospected with a metal detector, so it could have some serious potential. A little bit of gold can completely change your perspective! I came back a few days later and brought a friend, and although I didn’t find anything that day, he found two nuggets a bit away from where I found my two.

I went back by myself two more times and found nothing but the usual trash. Searching all around the spot where I’d found my gold, there was just nothing more to be found. I became discouraged again after three days of my time with no gold found. A few scattered nuggets do not make for a great spot, and the gold was on the small side anyway.

I didn’t go back there again during 2017. After another winter of thinking about it, I decided to return, and within a few hours I snagged a nice pennyweight nugget, the largest I found at this location. That was all I found that day, but it was enough to get my enthusiasm up again. I returned again a few days later with the same friend I had brought there before. This time he found one and I found two nice nuggets totaling a gram, plus a specimen with about two grams of gold in it. The two nuggets and the specimen were all within about 20 feet of each other and the larger pennyweight nugget was detected only about 30 feet away. The gold was all rough and pretty angular, indicating that it was probably residual in nature.

I was very enthused again. I took a look at where all the nuggets were found both this year and last, and they all seemed to line up in a zone with a definite direction to it. We’d found a total of around one-quarter-ounce of gold and that was enough to show a trend. I figured if I could just follow along detecting in that line, I’d walk through the forest picking up nuggets as I went. Of course, things are never that easy. 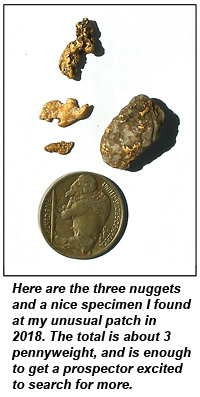 First, this flat mountaintop is heavily overgrown with manzanita and thorny brush. Little fir trees, about 3 to 6 feet high, grow so thick in places that they are impassible. Nearly everywhere, pine needles cover the dirt a couple of inches deep. These are all problems that a forest prospector must deal with that a desert prospector will never see. I spent three days following along in the projected line where the nuggets were found, and I got another three days of the skunk. Discouraged again.

At this point you probably think I am just a prospector who rides up and down on an emotional roller coaster. That is true about all of us to a point. We get excited to find a new gold patch and imagine all the possibilities for some very nice gold. We also get a little down when we get skunked, especially if we are skunked for a number of days in a row.

I’ve seen nuggets follow a line before, both going down a hill and following along the strike of a shear or fault zone. But it doesn’t always work that way. This time it did not work out. The gold may be scattered from erosion, or it may be in the line I saw but the soil is deep and a lot of the gold may be deeper down—so deep that most of it cannot be detected. I probably should dig a few holes just to see how deep the soil really is. I’m guessing its a few feet and even pennyweight nuggets cannot be detected a few feet down. I might even try my dry washer in the spots where I found the gold. The soil is also fairly hot and digging out targets usually results in a lot of magnetite sticking to the magnet on my pick. Here are some of the lessons from the prospecting roller coaster ride I’ve encountered with the discovery of this unusual nugget patch:

First: Some places that you would not expect to have gold actually do. Most prospectors seek only places where the old timers worked and found good gold, and they ignore places with no workings. Some of those places with no old workings actually do have gold and can be worth searching for. The flipside of this is that the well-known places where the old timers made good finds have already been explored.

Second: Sometimes the first day at a new place may not be that great; it may take time to get the hang of it and figure that location out. I got skunked that first day at this place. If I’d given up after that, I would not have found this patch. I have also had other places where I got no gold the first day but ended up doing well on return trips. If at first you don’t succeed, keep trying.

Third: Perseverance is required for successful prospecting. I will try this spot again next year, and who knows what I will find. Perhaps it will yet yield the multi-ounce pocket I am hoping for. Maybe it will be a pocket of specimen gold. I just don’t know. Exploring this spot has been kind of a roller coaster ride, but some patches are just like that.

Hopefully the story of my experiences will help you find some more gold of your own the next time you are out exploring for new patches and gold deposits.

Prospecting for Gold at Green Valley

December 2012
In October, five of us decided to take an exploration trip into an area called Green Valley. This was perhaps ten miles upstream from where we had gone in September and the difficulty was access. One would think that based on the name it was an easily accessible area not far from a nearby town. This couldn’t be more wrong.

August 2013
These are just some of the ways I have been able to find new spots to metal detect for gold.

It Pays to Know Your Bedrock

On our last trip, we brought ropes and went down the first waterfall forty vertical feet, only to be confronted by a second, sixty-foot-high, overhanging waterfall that emptied into a slot canyon.

Think You Got It All? Guess Again!


Is your gold recovery actually 95%, 90%, or even a really poor 50%? If you are not testing to know what it really is, you just don’t know. Some do regular testing, but most do not.

There are so many places in this region to discuss that one article won’t be enough to cover it all, so I’ll focus on a couple of places that we found interesting while searching for gold.