Click on the image below to view quotes and prices in .pdf format.
You will need Adobe Reader to view the file. It's available for free if needed. 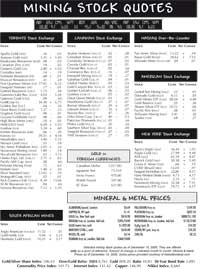 May 2014
When it comes to the expense of using a car, van, pickup or panel truck for business purposes, they can be deducted by the operation as 'transportation" expenses.

May 2012
Just as we were sitting down to write this column, a political bombshell was released when Rick Santorum announced he was terminating his efforts to win the Republican Presidential nomination, virtually assuring the nomination will be to Mitt Romney. The remaining candidates, Ron Paul and Newt Gingrich appear to have no realistic chances.

August 1999
A report from the Bureau of Land Management (BLM) titled "Public Rewards from Public Lands—Fiscal 1998", shows that minerals production is the largest income producer for the federal government on BLM-managed lands.


For “hard money” advocates, this has been a remarkable month. Gold has risen by more than $100, silver has begun to surge, and the headlines are full of news items quite capable of raising public concerns to crisis levels.