How to Beat the Heat--and The Bedrock

The summer heat has been dragging on for quite a while now in Northern California. In my neck of the woods, the low afternoon temperatures have been about one hundred degrees and the highs near one hundred and fifteen in August. This has been ongoing for at least six weeks.

My hunting partner George and I took a trip down to the American River to see friends and maybe find some gold. After a few days coming up short we decided to head back home, take a day off, and head out a whole new direction. It was time to seek out a cooler location to metal detect for gold.

All packed and ready, we started our new excursion to the north. We were heading to a spot I had detected for years. The area was shown to me by a friend many years ago. The country we were going to was out in the middle of nowhere. On the south we had the high country of the Trinity Alps and on the north we were closed in by the Salmon River Divide country. Although the elevation was not high where we were headed, there was usually always a nice, cool breeze coming off the snowy peaks that were never out of sight. At this location, we could come upon a herd of elk at any time. Usually this time of the year they are up higher, but I have seen them in the lush and wet duck and geese habitat that some of the old mining sites have been transformed into. 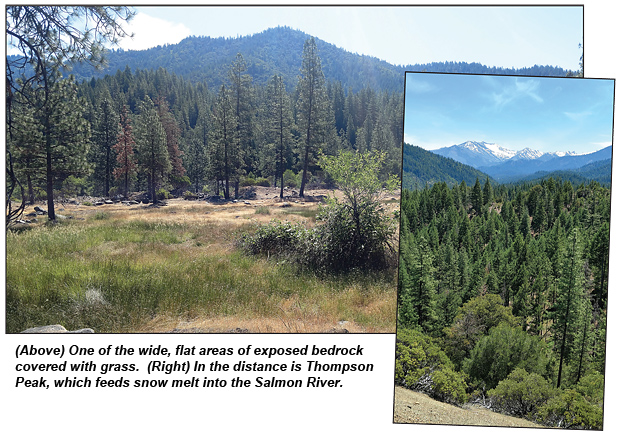 After a 3.5-hour drive we pulled onto our road and started to see snow on Thompson Peak that feeds the Salmon River. Thompson Peak also feeds numerous streams that drain into the Trinity. In no time at all we saw the ancient channel on one side of the road and worked out areas on the other. This is a vast area that goes on for miles. The gold here is derived from the ancient channel and hard rock sources. There are many areas where the channel is still in place; however, it is very difficult and dangerous to access. The area provides detecting locations that anyone would be happy with. Some huge nuggets were recovered around this area by the old timers, all the way up to 1.5 troy pounds. 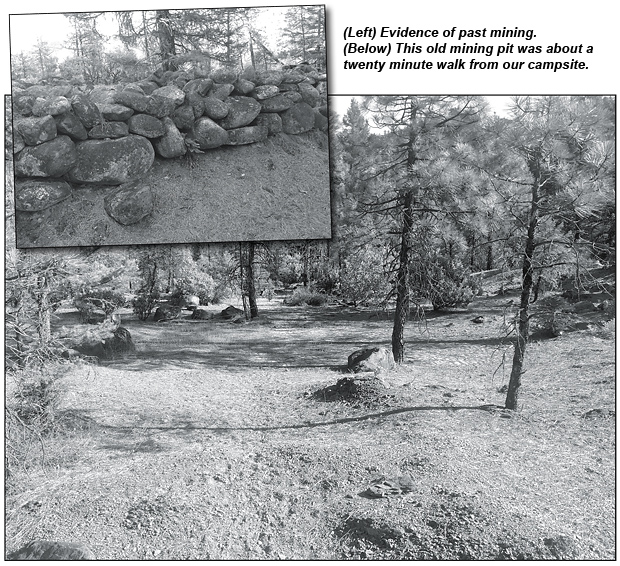 There are long, wide-open bedrock flats that are covered with grass. There are edges and escarpments on the edges of the gully diggings to detect. Hydraulic pits are scattered all around the area. There is a lot of ground higher up on the hillsides where the channel has long since washed away but left a few indicators and some nice gold. There are places in the open and in the shade, along the river and in the trees. The Salmon River can be heard in the distance.

We travelled a few miles and hit our dirt road. From here we had about five more miles to go, and then we would make our way down the last dirt road to our campsite. Arriving at the site, we quickly decided where to set up and got to it. We were at the end of a long flat that had produced gold in the past. The colors in the area were fantastic. The blue sky, lush shades of green, and the stark whiteness of the snow against the silver granite along with the sound of the river in the background was enough to see and enjoy on this trip, even if we did not get any gold.

After setup and having something to eat and drink, we both decided to detect the rest of the afternoon right here at our bedrock flat. This flat is about the length of two football fields and about twice as wide with a sparse covering of grass. The ground is a mix of decomposed granite, shale and serpentine. At many points the flat is crossed by two- to three-foot-wide porphyry dikes. As the old timers washed the flat the gold would get hung up in these porphyry dikes. I have never dug any deeper than twelve inches at this flat. The gold I’ve found here is mostly flat pieces of about a pennyweight or less. Over the years a few larger pieces up to five pennyweight have been found.

Just a few crumbs this afternoon would keep me sleeping tonight in anticipation of tomorrow. George got the first piece of yellow and I quickly followed. We both detected for several hours and then relaxed and got ready for dinner. 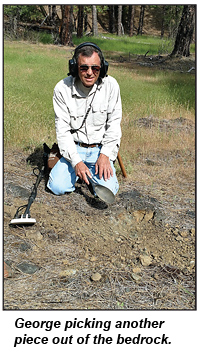 On the next day George was going to stay at the flat while I took off for a small pit that was some twenty minutes away. The pit was a classic one—exposed shale bedrock with all the material being washed out one end of the pit. Within a few minutes I had a nice mellow signal that was in open ground. It turned out to be deep, about sixteen inches. Eventually I didn’t hear my target while detecting over the hole. I picked up dirt from the pile and could feel some weight in the very first handful. The very first piece of the day was a nice one. Back at camp, later in the afternoon, I put it on the scale and it was right at three pennyweight.

I got that itch to move on after detecting for another hour with no results. I headed back towards camp, hunting all along the way. Big bedrock flats between me and our camp provided more pieces suitable for earrings. Being able to stop and get a mouthful of iced tea every now and then while looking off in the distance to see a waterfall surging out of a mountain lake and down the granite walls was fantastic.

I took my time getting back to George and found him sitting at camp taking it easy. He had just stopped for a break; he had been finding gold also. While sitting and talking I thought about a place just a couple of hundred yards from our location. It was an area that had been used as a blacksmithing site. There are shards of tin all over the bedrock, but I was convinced that some nice nuggets lay in some of the exposed cracks. We decided to walk down to the area. 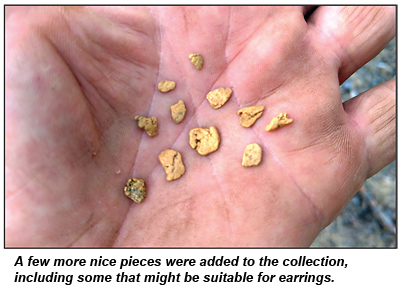 George used the VLF and started to detect. He got a few hits between the scattered tin, but I could tell he was getting frustrated. I reached down to check my pocket and see if my straw was there. It was, and I told George to take a break while I showed him something. I found a nice, steep, breaking crevice that was running the direction I wanted; it was only a few inches deep and covered by tin. I got down on my belly and proceeded to lightly remove the soil and clay from the crevice. As I moved material I would take the straw and blow the crack clean. In just a few blows I started to see a few small flakes, which I picked up with my wet fingertip. In a couple of minutes, I was nicely rewarded as what I thought was another flake started to get bigger and bigger. I called for George to come over and take a look. In the crack on the very bottom on the bedrock was a pretty, dark orange, iron-stained, two-pennyweight gold nugget.

We detected another day and continued to find gold here and there. We saw elk droppings, but no elk. We did not come across any rattlesnakes here on this trip, which is unusual. We were able to watch a couple sets of ducks fly in at early evening and leave early morning each day.

We each ended up with some nice gold for the trip and the scenery was fabulous.

A video clip of this trip can be found at www.icmj.com under the “Videos” section.

How Topography Affects Prospecting for Gold

Keeping in mind how the local topography affects where gold has been deposited can help you find more gold, and is certainly something the prospector needs to keep in mind.

Right away I got a target, and it ended up being gold from a nice little bench. With only an hour left of daylight, I continued heading upstream and found five more tiny pieces of gold with my VLF…

Twenty Minutes on a Five-inch Dredge

September 2013
The first thing I realized was this was not a toy—this thing had power and I needed to really pay attention. I got into position, took a deep breath, and pushed that monster into the hard pack.

Confluences of placer streams are well known as concentration sites for heavy minerals. The basic reason is that...

Hunting for Big Gold in a Haunted Canyon

More than one prospector has gone into that canyon and never came out.