A retired gold prospector spent hours digging up his fortune in the northern goldfields near Kambalda, Western Australia, after finding the target with his metal detector.

The prospector, who wishes to remain anonymous, was not far from the site of the rich gold discovery made by Royal Nickel Corp. that we reported earlier in this issue.

The nugget is being called the “Duck’s Foot” due to its unique shape. It’s nearly 104 troy ounces, and testing indicated it contained 68 troy ounces of gold.

“When I had finished digging it out, I just thought ‘Oh my God,’” he said.

“There’s an amazing feeling of joy when you find a gold nugget, even a small one, so when I uncovered this one it was really a special moment. I have been going to the same spot for years but with a better detector, better technology, I keep finding gold in patches I’ve been over many times. I can’t believe the amount I’ve left behind,” he said.

The prospector said he camps out for weeks or sometimes months at a time. Prior to the “Duck’s Foot” nugget, he already found a smaller nugget that was large enough to pay for the entire expedition, and he recovered six nuggets on this trip.

“That meant the pressure was off and I could relax a bit,” he told The Sydney Morning Herald. “I started looking for deep signals in ground I’d gone over before,” he added. 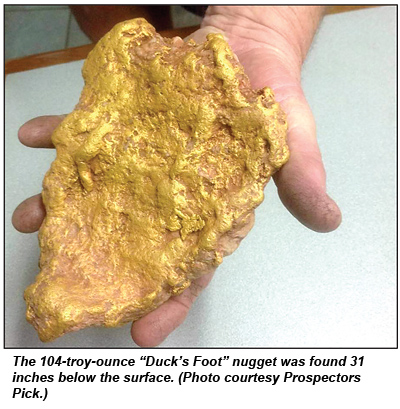 The prospector said the “Duck’s Foot” nugget was down deep—about 31 inches below the surface—and in clay soil. It took him two hours digging carefully to recover it.

He took the nugget with him to visit his friend Rob Anderson, who operates the Prospectors Pick in Banbury, Western Australia, and allowed Anderson to photograph the nugget.

Anderson said he’s known the prospector for a long time. “I think it’s fair to say he’s been very successful over the years,” said Anderson.

The gold bullion value is about $82,000 at current prices, but the prospector will likely get considerably more due to the rarity of large nuggets.

For years, ICMJ writers, many of whom are expert prospectors, have suggested to our readers that persistence, patience and in this case some newer technology, has its rewards.

Consider revisiting older patches with more than one type of detector, and take time to dig out signals that sound like deep targets. They may be trash, but then again, they may be a giant nugget shaped like a duck’s foot.

Volume is the Key to Success

While recovery rates are important, they must necessarily be secondary to the volume of material processed. Running more material at lower recovery rates is generally preferable to increasing the efficiency of the system.

I grew up in Southern California, and found my first nugget there, so I know my way around. Because there is good gold there, I thought it might be helpful to take a look at the many placer gold opportunities found in the southern part of the state.

How Do I Recover Gold In Black Sands?

Prospectors deal with black sands in lots of different ways. I know that some prospectors worry about getting every speck of gold and save black sands in buckets until they have hundreds of pounds.

An online video gave me some ideas, and with a lot of trial and error I developed a reliable method of panning free gold particles down below 35 microns quickly and easily.

A Short History of Hydraulic Mining in California

To add to the confusion, the dam wasn’t holding back a large amount of water. It was full of gravels and had a small creek running through it. I had to know more.

A Few Pointers About Cracks and Crevices

Because these crevices catch and hold gold so well, it's worthwhile to learn how they form, which ones are good for catching gold and which ones are not.