As California’s ban on dredging stretches into another year, I am finding other ways to get back into the water and go after that beautiful California gold. I decided it was time to try my hand at sniping for gold. It is one of the easiest and most affordable methods of gold mining, and the recent drought has actually helped things along, as some of the deeper placers are becoming accessible due to low water levels.

Sniping the cracks can be done either above or below the waterline. However, sitting on the dark, sun-scorched bedrock with sweat running into my eyes during the heat of summer—while using a bar and hammer to open the cracks—did not seem very appealing. So, I opted for the underwater portion of the river. All I have to do is float down the river and pick large flakes and small nuggets out of cracks and crevices while staying cool in the summer heat.

After a bit of planning with the rest of the family, we decided to spend our time on the American River at the Auburn State Park. There are no claims to worry about, plenty of river to work on (two rivers and a number of creeks), and a campground to stay in. It has a long and rich history of gold mining, and it is not far from town or the Interstate, so access is good. We picked a long weekend in August—typically the best time to go as the water levels are low and the kids are still out of school—and made a trip out of it. It was a bit of a drive from our home in Southern California, but we decided it would be the perfect place to go for some fun, sun and gold.

I also spent a few days getting outfitted for the trip. What do you need for sniping? While a wetsuit really isn’t necessary if you work some of the warmer rivers, it really does allow you to stay underwater and work all day—otherwise you will need to get out and warm up periodically. I invested in a good 5mm thick, full-body wetsuit and I have an old hood that has survived from my old dredging days. I also bought a good diving mask, snorkel and a bottle of anti-fog. Another really important accessory is a pair of good knee pads. A pair of $20 knee pads will save a lot of damage on an expensive wetsuit.

As for tools needed to work underwater, I generally travel light—partially due to the fact that I will be floating down a river and too much weight will make me sink. I have also found that I really don’t need much equipment to be productive. About 80% of my time I use nothing but a 20-ounce rock hammer, a 17” blue construction bar (similar to a crow-bar, but not as long and curvy), and a large sniffer bottle. (Note: I put lead weights into the sniffer bottle to help it sink and stay on the bottom—and you must fill it with water.) I put these tools into a small backpack and float along looking for likely cracks.

In the backpack, I also have a flat screwdriver, some thin knives for the cracks, tweezers, a bulb sucker, a small black pan and a 16” crack hook. (I have tied the crack hook, bulb sucker and pan together; and the crack hook acts as an anchor, keeping it all from floating away.) 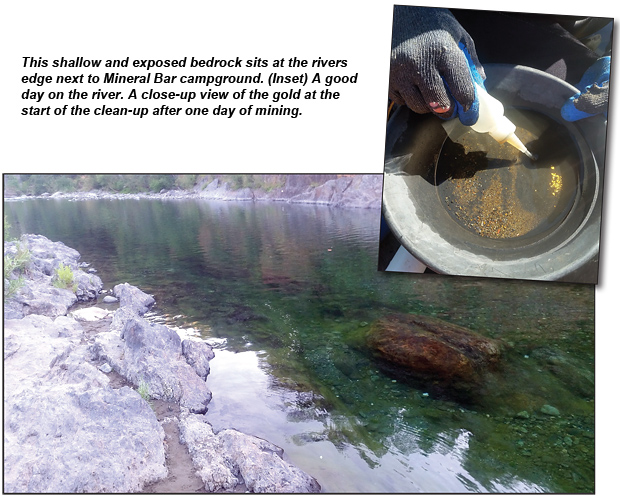 I mentioned that I use the blue construction bar for most of the work. This bar has a 90-degree bend on one end and is flat on the other. This allows me to hammer it into cracks and crevices so I can open them up. It is also thin enough that it will fit into some very small cracks and I can use it to scrape the material out of the crack.

The rock hammer is similarly useful—in fact, it is just about worth its weight in gold. When working the soft, well-foliated metamorphic rocks that are often found in the creeks of California, I can take the hammer and beat the rocks until they start to fall apart; it usually only takes a few blows to fracture the rock. I have been able to open up some nice cracks in large bedrock slabs by just breaking the rock out of the way.

Once I have opened the crack, I take my hand and gently fan the crack. By doing this, I can wash away the clay, sand, pebbles or other light material. I also use this to blow away the “smoke” that you get as any clay is picked up by the current. Fanning this material will usually leave the heavy materials such as gold and lead behind—though you will find that flakes and fines can blow out of the cracks, especially if you are using a lot of force. As a general rule, I will suck up the gold as soon as I can see it so I don’t risk losing it. I will also usually clean the bedrock below and to the sides of the crack or vug that I am working before I open it so I have a clean catch area where I can see the gold and easily recover it. (Gold will quickly sink through any sand or gravel.)

As heavy as gold is, it is surprising how much it can move underwater. If you do find a flake in a place that is relatively “safe,” you may want to spend a few minutes playing with it to get a feel for how gold moves underwater and how much energy you can put into fanning out the crevices before you lose the gold. 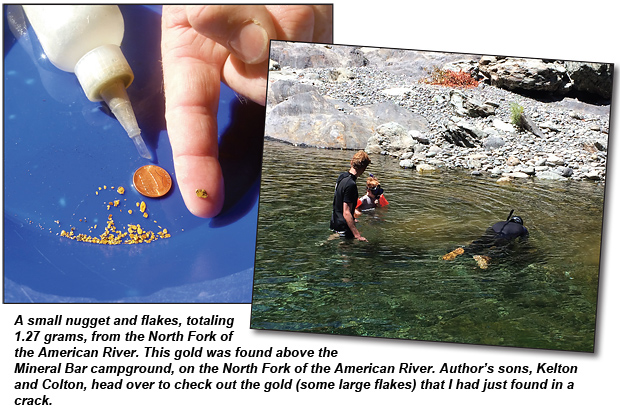 I have spent many hours sniping on some of California’s most popular rivers, and am here to say that there is still gold to be found. In some cases, there is still really good gold to be found. Many of these rivers have been hit hard: by the original miners, those who came after, then the dredgers who came and worked it again—but there is still gold. Many dredgers didn’t take the time to open up the small cracks, or maybe it was exposed bedrock when the dredger came through. (If there is no gravel to dredge, what is the point?) They simply moved on to another spot that had gravel. Also, it must be remembered that there is still gold-bearing sediment upstream—the old hydraulic pits, the ancient north-south trending stream deposits, and the quartz veins that carry gold are still there and slowly putting their gold back into the rivers with every flood event. This gold is still making its way downriver and into the cracks and crevices.

And every now and then, you will come across small areas that were simply missed by the old timers. On both of the last two trips I made to the American River, I found small vugs on the side of the river that were jam-packed with gold-bearing gravel. (A vug is a small bubble, hole or natural opening in the rocks). They were small, but appeared to have been untouched by past mining. I pulled a small nugget, some nice flakes and a bunch of fines from the little vug, and it was only a few inches wide.

While looking for a productive area to snipe, you should always keep moving. If you don’t find gold, move on. If I have spent 10 or 20 minutes without gold, it is time to go. It doesn’t matter how good the crack looks—if I haven’t found gold yet, it probably isn’t there. Similarly, if I have found gold in an area, I will check the cracks and crevices around it. The dredger or miner that missed the gold in one crack probably missed it in the related ones around it. Similarly, the conditions that will deposit gold in one crack will likely allow for deposition in other nearby cracks.

During this trip,  I spent three days on the river. I didn’t get rich, but I did find 1.27 grams of gold—much of it coming in as nice big flakes. I also found one thick flake/small nugget that I pulled out with tweezers. This was mining without sweating or straining. I enjoyed my time swimming in the cool river, watching curious fish swim up to see what I was doing, and sucking up big flakes of gold. While I was doing this, my wife and children managed to pass the time swimming, skipping rocks and chasing frogs; that would be my 6-year-old. And they loved to come by from time to time and see what I was doing—to see if I had any big flakes to show.

There is still gold to be found in the California rivers by those who are willing to look, and it isn’t that hard or uncomfortable to get. In fact, I can’t think of a better way of spending a hot summer day than slowly floating down a cool river while picking up flakes and nuggets of gold. 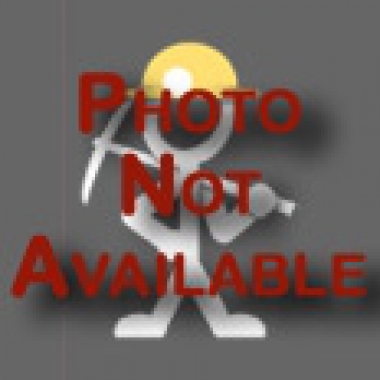 More On Gold Indicators—What to Look For

I am learning more about gold deposition in this area than I knew previously. I am passing this information on with the hope that many of you will be able to locate patches and lines a little easier in the future because of this article.

A week later, a small team of us hit it again, and this time the gold really showed up.

The Forms of Crystalline Gold

The largest and most perfect single gold crystals are nearly always in the form of octahedra. These large octahedral crystals often possess deeply recessed faces.

The higher the sensitivity setting, the louder and sharper the signal from a gold nugget or other metal target.

The biggest obstacle is that like many streams on the Kenai Peninsula, high water during the summer months from snow melt and rain can make dredging nearly impossible. The best dredging is in the colder months of the year.

All bedrock cracks that appear to be wide and deep should be cleaned out completely, and if you cannot clean it out thoroughly then you should break the bedrock apart…