We can’t say it wasn’t expected. The California Department of Fish & Game released revised suction gold dredging regulations on February 17, 2012, and it’s obvious the agency wants to make life as difficult as possible for dredgers.

If you were dredging on a waterway of six feet or less before dredging was suspended in September 2009, the agency wants to permanently prevent you from operating in that location. Other waterways are closed or subject to shorter seasons and potential deposits are placed off limits if they are within three feet of a bank at the 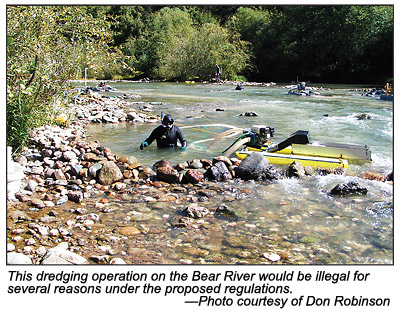 current water level. There could easily be 4,000 dredgers contributing to the economy of California at current gold prices, but the agency wants to limit the number of permits to 1,500 without citing any scientific justification for the reduced number.

The DFG is choosing to ignore the constructive comments from miners, former EPA scientists and others regarding the benefits of suction dredging and the mitigation it provides. The agency also wants to limit work hours to 10am - 4pm, which would be more restrictive than any other natural resource industry or business we are aware of. Even the San Jose (California) International Airport allows flights from 6:30am to 11:30pm over residential areas!

• Maintain and submit an annual report card to include the location of each dredging site, dates and times of operation for each day, nozzle size, horsepower.

• Present license and report card when demanded by a DFG representative at any time.

• Permit suspension or revocation for failure to carry or present permit or report card upon demand for inspection.

• No suction dredge having an intake nozzle with an inside diameter larger than four inches may be used without an on-site inspection and written permission.

• Solid, one-piece, restrictor ring required and no quick release mechanism is allowed for the ring.

• The inside diameter of the intake hose may not be more than two inches larger than the permitted intake nozzle size.

• Intake pumps are required to be covered with a mesh screen with openings of 3/32” or less.

• A containment system must be added under motor and fuel tanks capable of handling the full contents of the fuel tank and lubricants.

• Motorized winching is only allowed after an on-site inspection.

• Winched materials must be left within the current water level.

• No operating within three feet of the lateral edge of the current water level, including the edge of instream gravel bars.

• No moving, cutting or destabilizing woody debris such as root wads, stumps or logs.

• Piling material to concentrate water flow can only be done after an on-site inspection and approval.

• No fuel, lubricants or chemicals may be stored within 100 feet of the current water level. If this is not feasible, a containment system must be in place beneath the containers and be capable of handling the full contents.

• Stream material may only be moved within the current water level.

• No displacing any material embedded on banks.

• No disturbing any mussel bed where at least 10 mussels are found within a square yard, and dredges and tailings must be at least 30 yards upstream or 10 yards laterally or downstream.

• Tailing piles shall be leveled before moving to another site or finishing for the season.

• Dredges must be cleaned of mud, oil, grease, debris, and plant and animal material before use.

• Dredges must be pressure washed with > 120-degree water or left to dry for two weeks before use in another location.

• No person shall operate a dredge within 500 feet of another dredge.

• Dredging is restricted to 10am to 4pm.

In addition to these arbitrary and capricious rules, countless rivers and streams have been placed off-limits while others are subject to shortened seasons, even where endangered or threatened species are not present.

Also, the DFG released the revised regulations on February 17, 2012, and advised they would only accept comments until 5pm on March 5, 2012. It appears to be an obvious attempt to prevent those who are out working on their claims from having sufficient time to provide comments.

We recommend that you immediately fire off an email or phone call to DFG to respectively request an extension of the comment period via email at dfgsuctiondredge@dfg.ca.gov or by phone at (530) 225-2275. Then, take the time to review the revised regulations and compose your comments. The revised regulations are available on our website at www.icmj.com or on the DFG website at www.dfg.ca.gov/suctiondredge/

Copies of the revised regulations are also available for public review at the following DFG offices:

Comments can be mailed or hand-delivered to DFG at:

Written comments may also be submitted to DFG via email at: dfgsuctiondredge@dfg.ca.gov

Please include the following in the subject line for all comments submitted via email: Comments re Revisions to Proposed Amendments.

April 2015
Nevada’s attorney general for the first time is joining a rural county in a 15-year-old legal battle...

California Dredgers: A Step Closer to Getting Back in the Water

The Disappearance of State Mining Departments

May 2011
Unfortunately, mining is politically unpopular and support of the mining industry, no matter how many jobs it brings to a state, even in times of difficult financial need, is never popular among politicians of any stripe.

Subscription Required:
The Bawl Mill   • Ask the Experts: Set up a small portable operation or send the ore to a custom mill?   • Ask the Experts: Who manufactures the diagonal vibrating table?   • Ask the Experts: Do "corners" need to be in place on the ground for a claim to be valid?   • Ask the Experts: Tantalite in an African nation -- is it worth pursuing?   • Legislative and Regulatory Update   • Following Clues to a Hidden Gold Deposit   • How to Melt Your Own Gold   • Judge Tosses Lawsuit Against Tucson-Area Mine   • Salted Mining Properties—How to Properly Evaluate a Claim   • Fine Gold Panning Without Using Mercury   • Australia Produces World's Largest Gold Coin   • Fells Flat Gold   • Colorado Considers Gold & Silver Currency   • Melman on Gold & Silver   • Mining Stock Quotes and Mineral & Metal Prices