The Washington, DC, trip I was scheduled to take with Clark Pearson of Public Lands for the People and Tom Kitchar of Waldo Mining District has been postponed. Several members of Congress are on self-quarantine as I write this, and federal agencies are trying to limit any possible exposure to the coronavirus, but this hasn’t stopped our meetings with members of the Trump administration. We’ve been in communication by phone and email and are grateful to be included in their quest to repair/fix/replace some of the overly restrictive mining regulations we all deal with on a daily basis.

There are many problems with the current mining regulations that need to addressed, including permitting requirements for activities that should be covered under casual use, unnecessary delays for permits, blocked access to public lands and mining claims, and many more.

As we reported last month, the current administration has taken action to begin fixing some of these issues, starting with the National Environmental Policy Act.

Over the past four years, we’ve met multiple times with recent appointees at the US Forest Service, Bureau of Land Management (BLM), Environmental Protection Agency (EPA), US Geological Survey, the White House, over 75 members of Congress, and we even had a meeting at the Pentagon. These meetings included the current BLM director and the current White House Chief of Staff.

What we presented is a sixteen-page brochure that lays out the current problems faced by all miners and suggested solutions we have gathered from our readers and from PLP members. It is subtitled “Breaking China’s Grip on America’s Mining and Production of Critical Minerals.” Though it has a “slant” toward providing relief from our reliance on China for America’s critical minerals, the goal is to provide relief for miners at all levels. (You can view this packet on our website.)

Currently, even a small mine operator can wait 5, 7, 10, or more years for regulatory approval in the US, while countries like Canada and Australia complete the process in one or two years while maintaining similarly stringent environmental standards. A miner must sue the agency in order to force them to move ahead with an EA or EIS. The largest mining companies might be able to receive sufficient investment, and may be able to invest the time and effort needed to complete this process, but it’s impossible for small-scale miners. The current scheme is absolutely unacceptable.

I’m happy to report that the Trump administration agrees with us and appears to have utilized our recommended changes to the permit process under the National Environmental Policy Act (NEPA). The administration posted proposed rule changes in January 2020, with a comment deadline of March 10, 2020.

ICMJ submitted comments on behalf of our readers—which you can read in the accompanying letter—but what I want to focus on here is the more extensive comments submitted by Public Lands for the People. PLP submitted three pages of comments and backed up those comments with relevant court cases. (A link to their comments is provided here.)

• NOIs are not “permits” that are “authorized” by the Forest Service or the Dept. of Interior, Bureau of Land Management. Mining operations were authorized by statute (30 USCA § 22) rather than merely permissive, and the agencies have no discretionary control over the NOI process.
• Courts within the 9th Circuit in cases such as Baker v. USDA, 928 F.Supp.1513 (1996) have stated that the timeframes of the Forest Service’s 36 CFR § 228.5 regulations (of 90 days) must yield to the longer statutory timeframes of NEPA before mining operations could proceed.  The court deferred to the Forest Service in assuming NEPA’s application but did not entertain numerous delay tactics on the part of the Forest Service. 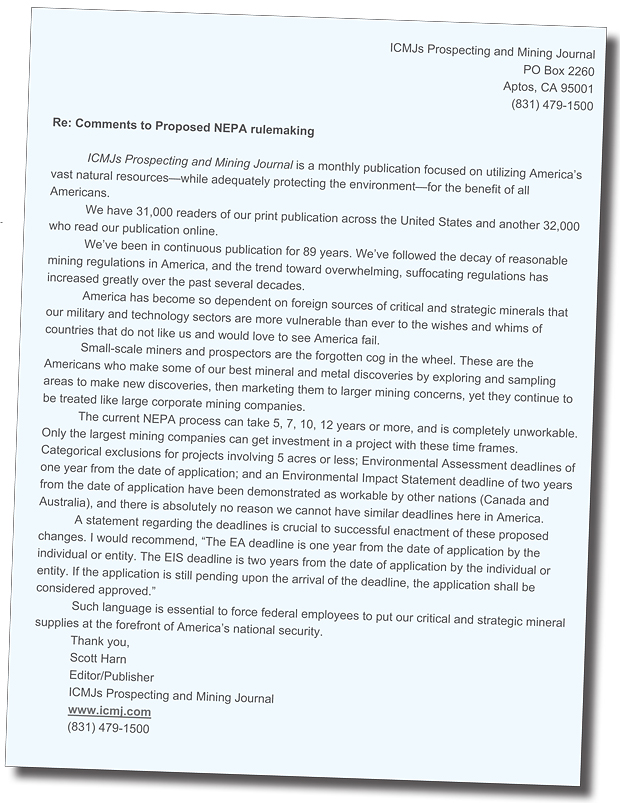 I want to stress that this is just the first step to fixing many of the regulatory issues we identified in discussions with the current administration. There will be plenty more to come.

PLP would also like to give a “shout out” to the Everett, Washington chapter of the GPAA. The Everett chapter conducted a fundraiser for PLP at the recent Washington Prospectors & Mining Association show in Monroe, Washington, and raised $800 for PLP. PLP wanted to make sure they were recognized for their continued support!

March 2012
We can’t say it wasn’t expected. The California Department of Fish & Game released revised suction gold dredging regulations on February 17, 2012, and it’s obvious the agency wants to make life as difficult as possible for dredgers.

March 2015
First, the US Forest Service does not have any authority to enforce or administer any “claim jumping” laws, period.

PLP Update: Back to The 'Swamp' on Behalf of Small Miners

We spent the morning in a meeting with one of the higher-ups at the US Forest Service. I presented him with 412 complaints received from our readers, along with a summary of the complaints to make his job easier.

Subscription Required:
The Bawl Mill   • Sampling for Success—Part II   • Ask The Experts - Investing: How do you know which companies have potential?   • Miners Fight Back When BLM Says 'Your Claim Is Too Long'   • It's Another 'Ben Day'   • How to Research Prospecting Locations and Mining Claims   • Some Tips and Tricks for Dredgers: Determining Pulley Size and Belt Length   • Where Will The Gold Price Go From Here?   • Holcomb Valley Gold, Southern California   • Gold Prospecting for Better or Worse: The Good Luck and Bad Luck of Prospecting With Animals   • Lode Miner Continues to Find Pocket Gold   • Judge Backs Minnesota's Twin Metals Mine in Lease Dispute   • Over the Divide: Rick Lague   • Melman on Gold & Silver   • Mining Stock Quotes and Mineral & Metal Prices