Xmet Aims for One Million Ounces

The beautiful province of Quebec, known in French as “La Belle Province,” is not only famous for its scenic attractions and world-renowned cities such as Montreal and Quebec City, but also as being one of the most attractive places for mining from both a geologic exploration and development point of view and for its industry-recognized governmental support for mining. The widely-read Fraser Institute rating of mining jurisdictions worldwide consistently ranks Quebec among the top ten such places.

One junior mining company active within Quebec is Toronto-based Xmet Inc. Its roster of Quebec properties includes its flagship project, Duquesne-Ottoman, located near the city of Rouyn-Noranda in the heart of the historic world-class Porcupine-Destor Mining District where past production amounted to over eighty million ounces of gold.

The area near Duquesne-Ottoman continues to host intensive exploration work with many companies occupying nearby holdings, including several major mining enterprises. Among that list is Clifton Star, Iamgold, Midland Exploration, Golden Valley, Aurizon and Tres-Or.

We were able to travel to Xmet’s field offices in Rouyn-Noranda; meet with Pierre Riopel, Quebec Exploration Director and Barbara Guimont, Project Geologist; and visit drilling operations ongoing at the Duquesne-Ottoman Project. The timing of our visit in mid-January 2012 allowed us to witness first-hand some of the 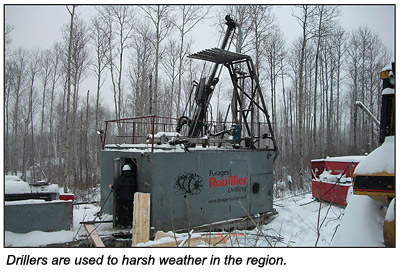 extreme climate conditions that can occur in Quebec in mid-winter. However, the company is able to continue exploration work year-round thanks to well designed equipment and a local population used to working in such conditions.

Charles Beaudry, COO and President, was scheduled to host the visit, but thanks to a raging area-wide snowstorm his flight was cancelled so we did not get to visit personally. However, I was able to discuss progress at Duquesne-Ottoman and the company’s other properties with Charles via a Skype connection.

Xmet’s facilities in Rouyn-Noranda include offices, core storage and display area, and general storage facilities. Thanks to the region’s long history of mining, area infrastructure is excellent in terms of mining supplies and personnel, electric power, water, highways and nearby railroads.

Duquesne-Ottoman is composed of 60 exploration licenses (claims) totalling 2,321.5 acres (928.6 hectares), and the property has been the subject of documented exploration since 1927. Through the years a total of 239 diamond drill holes totalling slightly more than 65,000 meters have been drilled on the Duquesne Block and an additional eight holes totalling 3,106 meters have been drilled at Ottoman. In addition, an 80-foot shaft at the Duquesne West Block was sunk by Claremont Mines in 1983, and a bulk sample of approximately 425 tons was produced. Historic records show an average grade for the sample of 0.11 ounces per ton gold (opt Au), which corresponds to 3.8 grams per ton (gpt) Au, but that information is historic in nature and is non-compliant with present NI 43-101 requirements.

Thanks to this historic work, five original ore zones were discovered and named, including Liz, Fox, Shaft, South Shaft and Stinger. By the time the second NI 43-101 Mineral Resource Estimate was published in October, 2011, three new zones had been added named Nip North, Nip South and 20-20.

Company geologists state that the Duquesne-Ottoman Project is located in a district where gold mineralization is typically found in two styles. High-grade shear zones are hosted in veins and stockwork zones at major lithological contacts and within breccias zones (“Duquesne style”) while lower grade ore is found in bulk mineable disseminated zones in syenite and calc-alkaline granite porphyries (“Beattie style”). They also note that the ore at Duquesne-Ottoman is very “clean,” consisting of free gold associated with a low percentage of pyrite and no arsenic or graphite.

The Ottoman Block lies to the north and west of Duquesne and has seen little to no activity over the past two years as the company is focused on advancing the Duquesne Block in two particular directions; increasing the Resource Estimate to one million ounces and also advancing some of the “Inferred” resources into the Indicated category.

When Xmet originally took over the Duquesne project, their first goal was the publication of an NI 43-101 Resource Estimate, which took place in November, 2010 and showed “uncut” Inferred resource figures including 2.731 million metric tonnes grading 6.00 g/t Au containing 525,000 ounces of gold with most of the resources coming from the Liz Zone and Fox Zone. That estimate was based on historic work at Duquesne-Ottoman, with particular emphasis on 17,831 samples taken from 112 holes drilled from 1994-2006.

Xmet continued exploration and development work for Duquesne-Ottoman during 2011, including a 13,000 meter Phase I drill program that was completed in April, 2011. As a result, an updated NI 43-101 compliant Resource Estimate was completed in the latter part of 2011 that showed uncut resources of 4.171 million 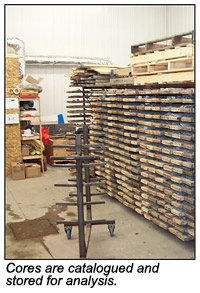 New results since the publication of the Resource Estimate come from the Shaft Zone area where significant assay results were obtained in Hole No. DO-11-61, which returned 4.4 g/t Au over 4.9 meters and Hole No. DO-11-54, which intersected 3.65 grams over 4.0 meters. Exploratory drilling was limited to a depth of 130 meters but the company believes the mineralization remains open to depth. Company geologists believe the significance of Shaft in the overall picture is that the mineralization starts at the surface and could eventually bridge a gap in ounces between the surface and the top of the Liz and Fox zones, which start around 225 meters in depth.

One of the statistics used to compare mining exploration work is the net cost of adding an ounce of gold to estimated resources. In Xmet’s case, they were able to add 328,000 ounces based on a drill program costing $1.3 million—or a net cost of $4.00 per ounce, which compares well with industry standards.

The company’s 2012 drill program, which is now underway, has been designed primarily to upgrade resources from the “Inferred” to the “Indicated” category and the Liz Zone will see the highest concentration of work. Liz and Fox will also be the focus of four drill holes in the present program designed to add ounces to the estimates to bring the total resource up to 1,000,000 ounces. In order to upgrade resources from Inferred to Indicated, it is necessary to drill on 50 meter spacings. At some future point, in order to upgrade into the “Measured” category, drill holes will have to be on 25 meter spacings. However, in this case some underground sampling may also be necessary.

During the visit, I rode with Pierre and Barbara to the site of present drilling at the “Nip North” Zone. The terrain was mostly rolling country, devoid of any high mountains. Pierre advised that the gravel road leading off the main highway was in excellent condition, having originally been built for timber harvesting only four years ago.

During winter, except for truly substantial storms, the road is kept open, and we drove to the end and then hiked cross-country about 2 km to the site of the drilling rig at Nip. The rig is run by two brothers and is part of the ongoing Phase One drill program, which is planned for about 6,000m and is fully funded. A Second Phase is planned for later in 2012.

Xmet has no plans to take any of their projects into production, as they are explorers and developers, not miners. Their goal is to take a project such as Duquesne-Ottoman to the point where it can be sold profitably or where it might be joint-ventured by a deep-pockets partner, with the proceeds then being used to develop other projects.

“Our preference is for someone to take over the project at some point, but we won’t sit on our hands waiting for someone to show up at the table,” said Charles Beaudry. He added, “We will keep working toward adding ounces and look at possible deals that could provide synergies to the project.”

One of the interesting new discoveries at Duquesne-Ottoman is the “20-20” where one hole discovered 6.8 g/t Au over 6 meters and a second hole uncovered 4 g/t Au over about 4 meters.

Given the immediate importance of other areas such as Liz and Fox, work at the 20-20 will be held back for a while, but the company believes the 20-20 zone does have potential for future development.

Specific goals for 2012 include completing the Phase One drill program in order to both upgrade current resources as well as add newly-discovered ounces; conduct preliminary metallurgical and environmental baseline studies; and produce a new, updated NI 43-101 Resource Estimate by mid-year. Beaudry is scheduled to visit the project in late February with a geo-metallurgist to review the geology of the mineralized zones and collect samples.

Longer-term goals include the undertaking of a Preliminary Economic Assessment (PEA) if it appears to be warranted, evaluating the possibilities of creating ramp access to the Shaft, Liz and Fox zones, and to continue working to expand Inferred Resource ounces.

Xmet also owns several other Quebec properties including the Grasset, Livaudiere and Authier, plus three other properties in the Chibougamau district to the north. While the main focus remains on developing the flagship Duquesne-Ottoman Project, plans are also underway for some of these other properties as well.

During the winter months of 2012, a program of line cutting and geophysics at Grasset is scheduled and company geologists also plan to compile all available data and conduct property visits. Goals for later in 2012 include evaluating potential joint venture (JV) partners for Grasset, identifying suitable targets for drill programs and seeking JV partners for projects other than Grasset in order to further advance those developmental properties. The company is also looking to add other advanced exploration opportunities to their portfolio and also expand the project roster via staking operations.


Additional information is available on the Internet at www.xmet.ca or you can email Stephen Stewart at sstewart@xmet.ca

The lake is at the southern tip of the San Andreas Fault, which has shifting tectonic plates that bring molten material closer to Earth’s surface. The only other part of the US known to have more geothermal brine available is on the fault’s other end in Northern California.

How to Refine Silver—Pt II

Silver recovery from low-level solutions is frequently done in a cell that has a cathode with 2 to 5 or more times the surface area as the anode.

September 2012
If all goes well before the BLM issues its final approval, Littleton, Colorado-based UR-Energy could start building the Lost Creek mine by early October, according to company and BLM officials.

Gold Deposits of the Ivory Coast

April 2014
Ivory Coast has considerable gold reserves, and this nation has the largest area of greenstone belts prospective for gold in the continent.

Thieves Make Off with Tons of Gold & Silver Ore


According to local press reports, about ten armed thieves forced their way into a private freight dispatch yard near the port, subdued employees, and then took several hours to search for the shipping containers…

Where Will The Gold Price Go From Here?

There seem to be two possibilities for the future of this disease and either way there will be an effect on the price of gold.

Subscription Required:
The Bawl Mill   • Ask the Experts: Set up a small portable operation or send the ore to a custom mill?   • Ask the Experts: Who manufactures the diagonal vibrating table?   • Ask the Experts: Do "corners" need to be in place on the ground for a claim to be valid?   • Ask the Experts: Tantalite in an African nation -- is it worth pursuing?   • Legislative and Regulatory Update   • Following Clues to a Hidden Gold Deposit   • How to Melt Your Own Gold   • Judge Tosses Lawsuit Against Tucson-Area Mine   • Salted Mining Properties—How to Properly Evaluate a Claim   • Fine Gold Panning Without Using Mercury   • Australia Produces World's Largest Gold Coin   • Fells Flat Gold   • Colorado Considers Gold & Silver Currency   • Melman on Gold & Silver   • Mining Stock Quotes and Mineral & Metal Prices