Over The Divide: Kenneth Leon Harn 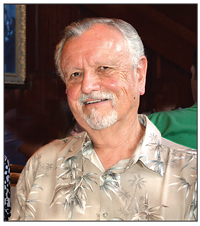 I am extremely saddened to report that my father, Ken Harn, previous Editor/Publisher of ICMJs Prospecting and Mining Journal from 1979 to 1999, passed away peacefully on Saturday, February 29, 2020, at the age of 82 after a long struggle with Alzheimer’s.

Ken was born in Los Angeles, California, but relocated to Soquel, California as a child with his parents. He attended Mountain Elementary School, where his mother, Alice Harn, taught multiple grades in the one-room schoolhouse, while his father, Guy Harn, operated a pony ring down by the Capitola beach and raised thousands of chickens on their family farm. Ken met his wonderful wife, Kathy (Reid), while they were classmates at Santa Cruz High School. After spending two years in the Navy, Ken and Kathy were married in 1962.

Long-time readers of the Journal who remember Ken as Editor and Publisher may not be aware that Ken had a successful career in law enforcement prior to his career in publishing. Ken began as a police officer with the Santa Cruz Police Department in 1958, and eventually retired as Chief of Police of Pleasant Hill (1975-1979). In between, he also worked at Newark PD and Gilroy PD.

For the next 20 years, Ken worked diligently to transform a small mining magazine, with its gold cardstock cover, hand drawn cartoons and black text, into an internationally recognized magazine with a glossy cover, color photos and stories that covered not just California, but everywhere else in the world where mining and prospecting news happened. For a while, he took a lot of flack from old-time readers who weren’t happy with the switch from a cardstock to glossy cover because their magazines wouldn’t stay stacked anymore! But in the end, most people were grateful for the improvements he made, including legislative updates, Melman on Gold & Silver, a whole page of mining stock quotes, and more. If you recall, the early 1980s were a great time for gold and the magazine took off. With its international reach, Ken decided to change the magazine title to International/California Mining Journal. At the end of 1999, he and Kathy sold the Journal to me and my wife Sally, and they retired once and for all.

He will always be remembered as someone well-known for his work ethic, honesty, integrity, caring attitude and witty sense of humor, and those readers who knew him were well aware that he fought tooth and nail for the rights of miners. He adored his family, loved traveling, camping, boating and fishing—he especially loved catching salmon and going fly fishing. He was a person whom his friends, co-workers and family wanted to emulate.

When Sally and I first took over the Journal, he was the best mentor anyone could ask for. We are forever grateful for all the ways he helped us grow as a business and as human beings. He was a great father, grandpa, and friend, and he is dearly missed. May you rest in peace, Dad.

July 2011
Lately I’ve been having success utilizing two types of detectors in succession. The first is a pulse induction (PI) detector with a blanket-style antennae, and I follow it up with a very low frequency (VLF) detector.

The Wild Rush to Find More Cobalt—Part I

While some future cobalt will come from recycling lithium batteries and other products, the coming huge need for cobalt is virtually a perfect storm of heavy demand and insufficient supply.

Winter in Alaska! What is an Alaskan gold miner to do? Go somewhere warm to look for gold, that's what!

Four Miners Die in Mine Accidents in Ukraine

July 2000
Four miners were killed in eastern Ukraine in two separate accidents during one week in May in the country's troubled mines, emergency officials said.

Subscription Required:
The Bawl Mill   • Sampling for Success—Part II   • Ask The Experts - Investing: How do you know which companies have potential?   • Miners Fight Back When BLM Says 'Your Claim Is Too Long'   • It's Another 'Ben Day'   • How to Research Prospecting Locations and Mining Claims   • Some Tips and Tricks for Dredgers: Determining Pulley Size and Belt Length   • Where Will The Gold Price Go From Here?   • Holcomb Valley Gold, Southern California   • Gold Prospecting for Better or Worse: The Good Luck and Bad Luck of Prospecting With Animals   • Lode Miner Continues to Find Pocket Gold   • Judge Backs Minnesota's Twin Metals Mine in Lease Dispute   • Over the Divide: Rick Lague   • Melman on Gold & Silver   • Mining Stock Quotes and Mineral & Metal Prices