“In light of the results of the midterm elections our focus will be with the US Senators and their staffers that we have already been working with,” said Clark Pearson, northern director of Public Lands for the People (PLP).

Republicans lost control of the House, which means the committee chairs and members in the House of Representatives we were meeting with in our attempt to provide regulatory relief for small miners across the US will lose their influential positions. However, the Republicans gained two Senate seats—for a total of 53—and could possibly gain one more following a run-off election scheduled for November 27 in Mississippi.

In 2018, a section addressing critical and strategic minerals was added to the National Defense Authorization Act (NDAA). The 2019 NDAA cycle will be our focus.

PLP is also working on a political strategy and a “white paper” that should provide significant influence with the legislatures in California, Oregon, Idaho and Washington in regards to suction gold dredging. However, rather than waiting for those legislatures to come to their senses in light of the evidence, the focus will remain on getting relief at the federal level.

Plans are in the works to head back to Washington, DC, for meetings with the US Forest Service, the EPA, and members of the Senate Armed Services Committee. We initially planned to head back in early December, but we are waiting to see what changes are made to several of the key committees. New members of Congress will be sworn in on January 3, 2019, and we hope to be there soon afterward. We have several Senators on the Armed Services Committee who have already expressed their support for our legislative proposals to provide relief for small-scale miners. 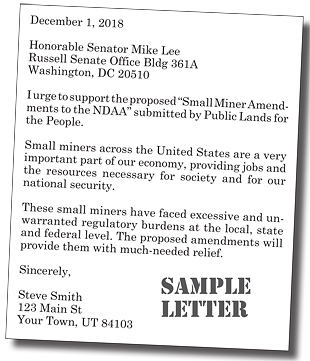 Again, I’m going to ask for your assistance. If you could please write a letter in support of the “Small Miner Amendments to the NDAA,” I will take these letters of support to DC with us and hand-deliver them as we talk to members of the Senate. (If you haven’t had a chance to read the Small Miner Amendments, you can find them with a quick search on our website.)

Please be sure to address your letter to your newly-elected Senators and not the ones who are currently in office if a new one is due to take that seat. The politicians want to know they have constituent support when they consider legislation, and your letters will be put to good use.

March 2017
This will provide the opportunity to meet with many of the members of Congress in a more informal setting at several meetings, luncheons and dinners. And we have been offered the chance to meet with President Trump’s staff.

PLP To Address Needs Of Small Miners With Proposed Amendment


The Senator’s office was very receptive to the small miner’s plight and was unaware of the dire problems created by the over-regulation of small-scale mining from so many different fronts. It was pointed out that S 145 may help the large mining companies a little, but falls woefully short in addressing the needs of small operators who make up 85% of domestic mines.


…a half-dozen dredgers have completed the appropriate paperwork and are conducting dredging operations at this juncture. They hope to expand these efforts to other western states in the near future.


PLP is also concluding its funding and review of a scientific study which names the suction dredge as the preeminent tool for reclaiming American waterways to counter atmospheric mercury impacts coming from China.


Plans are also under way to coordinate with the incoming chairman of the Senate Energy and Natural Resources Committee.

Subscription Required:
The Bawl Mill   • Legislative and Regulatory Update   • Ask The Experts - LR 2000, ArcGIS, and other mapping applications   • Ask The Experts - Advice for a new prospector in Placerville, California?   • Placer Gold Deposits of Utah   • Proven Strategies for Detecting Gold   • Gold Prospecting for Better or Worse: Lesson Learned   • Time to Come Home   • Gold Indicators—What to Look for in the Goldfields   • The Rest of the Story—Detecting With Ray Mills   • Gold and Mining Stocks Will Rebound—But When?   • Melman on Gold & Silver   • Mining Stock Quotes and Mineral & Metal Prices

Free:
Ask The Experts - Can a detonation help determine the size and location of basalt?   • On the fence about subscribing? Want to check out a 3D sample issue?   • Resurrecting An Old Hard Rock Mine