Resurrecting An Old Hard Rock Mine

We had been walking in the tunnels for what seemed like hours. The cool, damp air reminded me of an old cellar; it had a musty smell about it. I held my lantern closer to the dirt floor and was startled by what I saw! As we passed by a wood ore shoot dropping out of a stope on our left, I noticed our own decades-old footsteps in the thick dust on the tunnel floor.

I was exploring an extensive hard rock mine with a friend from high school the summer after we graduated. We had crawled in many, many old mines before, and were very methodical in our exploring (so as to not get lost).  We had passed this wooden ore shoot before, and the realization that we were lost was coming into painful focus, as it became crystal clear we were going in circles. That was only the beginning of that sick feeling in the pit of my stomach. We turned around and headed back into the main glory hole that had numerous tunnels exiting it, one of which I remembered was the exit to the fresh air outside.

Well, we got back into what we thought was that room, only to realize it was a completely different big room, and completely unfamiliar! The flashlights were getting a bit weak, and my old propane lantern was running low on fuel. This was the first time in my outdoor adventure life I remember feeling that I was in really big trouble, and things could turn out very bad. I spoke a prayer, asking (begging might be a better description) for Divine guidance to get un-lost, and get un-lost real quick! I don’t remember the exact route we took next, but it wasn’t long before we found our way into the main room—the huge glory hole—that I was familiar with, and I knew the right tunnel to exit the mine. Whew! My prayer was answered even faster than I imagined it could! This underscores the truth about underground mines: Stay Out and Stay Alive! Only venture inside if you have proper safety gear, training, and someone outside knows you are in there.

As you may have noticed, I have always been intrigued with old mine workings, mining ghost towns, etc. As a long-time placer miner, I haven’t neglected reading reference books on hard rock mining such as Below the Grass Roots by Don Boston, which helped prepare me for my most recent adventure with a group of hard rock comrades. Because we all have agreed to not share the location and names, those facts will remain shrouded in mystery going forward.

The “resurrecting a hard rock mine” story really begins at a mining district meeting a few years back where I overheard a conversation about reconstructing a temporary head frame and hoist at an old hard rock mine. A couple of guys were actually repelling down into old mines, assaying the exposed veins where the old timers left off, and starting to mine them again. Needless to say, I was intrigued with what they were accomplishing on a shoestring, and wanted to write an article so as to help others that were considering hard rock mining. My goal was to inform and educate, but my mining fever got the better of me, and before you could say “There is no cure for gold fever,” I signed a non-disclosure agreement, visited some sites, sampled ore, met with the whole team, and the guys decided to allow me to help them bring a promising old mine back to life.

The mine they were working on was a pretty good producer back in its day. It probably was shut down at the start of WWII like most gold mines in the country. There were nice sections of vein material at the end of several drifts, like they just stopped work one day and walked away. 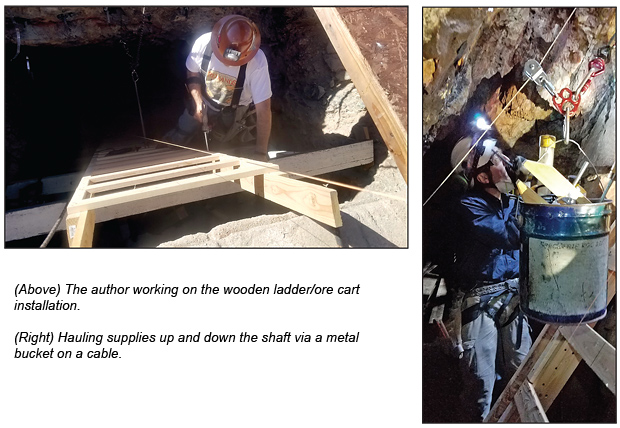 Recently my friends were bringing ore up the 55-degree incline shaft using a fixed cable, bolted to the hanging wall at the 80-foot level and fastened to a temporary head frame at the top of the incline shaft. Ore was put into 5-gallon buckets, six at a time, and placed into a welded steel framed box we affectionately call “Skippy.” This was clipped to the stationary cable and pulled up with a heavy rope and capstan winch. It was slow work getting ore up the shaft, swinging to and fro. It was just plain slow getting anything up and down the shaft. The miners were using climbing gear, repelling to get in and out. Tools and timber went up and down in a metal bucket suspended from the cable.

In our discussions about resurrecting the old mine, we knew we had to find a faster way to bring ore to the surface. The first thing we did was design a wooden ladder/ore cart and track combination. I have been through miles of old mine tunnels and have never seen anything like it. I must say we are very proud of this invention!

We built the main ladder section with 2x4 sides and 1x4 rungs. We used a 2x6 on each side, which stand an inch and a half higher than the ladder when complete. By combining the ladder and the ore cart track into a single structure, it makes both the ladder and the track stronger.  Soon we are planning to install a flat piece of steel on the top of the rail to aid in the longevity of the tracks.

We upgraded Skippy by adding welded-on all-thread axles and small wheels with the rubber tires removed. This allowed Skippy to ride the rails on the bare wheels perfectly without any derailing episodes.

We pre-built all the 10-foot sections of ladder at a wood shop and hauled them to the mine in a trailer, along with a small mountain of beam stock. Some beams were new; others salvaged from remodel jobs. Installing the cross beams to attach the ladder/track in the incline shaft was one of the more challenging construction projects I’ve worked on in a long time. We needed at least two cross beams installed under each 10-foot ladder section. We installed a string line from the bottom of the shaft to the head frame above ground at a known height above where we wanted the top of the ladder/track to ride up the shaft. This helped us reference the correct height and angle to install the 4x4, 4x6 and 4x8 cross beams.

We used various sizes depending on the width of the shaft. I must say it was extremely difficult guesstimating the correct length and angle cuts of the beams to match where we needed them to end up. Oftentimes, once you had one in place, driving the wedge(s) in to hold it permanently caused it to shift the beam around and you had to start over. Or, the angle would be perfect, but the height to the string wrong, or out of level so far we couldn’t make it work.

We often ended up square-setting timber between beams to help hold them in the correct position. Sometimes a post down to the footwall from the beam was also needed because the angle of the sidewall didn’t allow the beam to be wedged in place tight enough to stay put and hold the expected load.

We could only install 4 beams and 2 ladder sections a day. I was disappointed with the painfully slow process, but after chatting with a friend who has been hard rock mining over 30 years, installing only two ladder sections a day is normal. Working while hanging from ropes and wearing climbing gear is slow work no matter how you slice it! Fortunately, we kept a generator running on top, so we had power tools, lights and fresh air being pumped into the mine.

We have a great team of guys working together. The hoist man on top used a radio to communicate with the underground crew; so much easier than the old way of using bells to communicate underground. And having the Skil saw right where we were working saved time, but boy what a challenge making compound angle cuts on a beam while hanging from a rope!

The first load of about 500 pounds of ore was sent up the track in Skippy a couple of days ago. We hauled several full loads up the track and loaded it into the trailer to haul to the mill site on private property. The track worked just like I had pictured it in my head! We will be milling it and figuring out the best methods for this type of ore. We may get into doing the refining in-house, but that is yet to be seen. By “best methods,” I mean most economical, fastest, easiest, environmentally friendly, etc. The good news is we are mainly dealing with free milling gold, without much in the way of sulfides. Milling is an interesting topic for discussion I will save for another day.

Once the ladder/ore cart and track combo was complete, we started adding stulls where needed for safety around the intersection of the shaft and the level one adit. We built a platform across the shaft at that level and braced the ladder track off of part of it. At some point in the mine’s silent history, someone torched much of the timbering inside. It appears we have much timbering to install as we remove sections of the vein in order to maintain a safe work area.

We are a hardy band of independent miners, working together to create wealth by wresting it from the earth, in the same place where old time miners from the 19th Century first struck a pick into the ground. I can’t wait to see the results of our first batch of milled ore and then ramp up ore production. Stay tuned for the next exciting episode!

Find all the articles written by Ron Kliewer here... 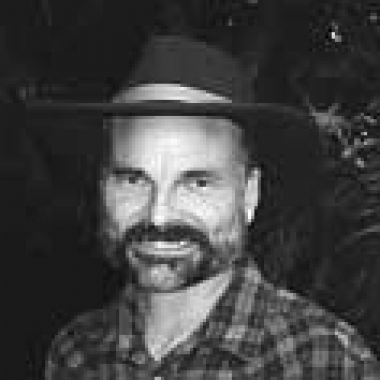 August 2014
What are the tell signs of garnet deposits?

I didn’t know what to expect because the area we were working was not close to the water, but we were pleasantly surprised when we began to pan out some nice flakes and a few pickers.

My wife Dorothy has always enjoyed tent camping. She thought she was really roughing it at established campgrounds until I convinced her to take a trip with me to drywash for gold in a remote corner of an arid desert wilderness...

Back in October I read with great interest Chris Ralph’s article on the use of a metal detector while drywashing, and I wholeheartedly agree—I wouldn’t even consider going drywashing without using a metal detector in conjunction...

How Deep Can That Detector Go?

Knowing how to get the greatest depth performance out of your detector can be a handy thing, but it’s not an easy, simple matter.

Detecting Basics: Lose the Bad Habits Not the Gold

I will make the assumption that when any of you take a detector in your hand and head out prospecting for gold you are probably anticipating finding some gold. That’s the general idea, right?

Subscription Required:
The Bawl Mill   • Legislative and Regulatory Update   • Ask The Experts - LR 2000, ArcGIS, and other mapping applications   • Ask The Experts - Advice for a new prospector in Placerville, California?   • Placer Gold Deposits of Utah   • Proven Strategies for Detecting Gold   • Gold Prospecting for Better or Worse: Lesson Learned   • Time to Come Home   • Gold Indicators—What to Look for in the Goldfields   • The Rest of the Story—Detecting With Ray Mills   • Gold and Mining Stocks Will Rebound—But When?   • Melman on Gold & Silver   • Mining Stock Quotes and Mineral & Metal Prices

Free:
Ask The Experts - Can a detonation help determine the size and location of basalt?   • On the fence about subscribing? Want to check out a 3D sample issue?   • PLP Update