Eleven mining organizations signed on to a “Petition for Rulemaking to Stop State-Law-Based Prohibitions of Mining on Federal Lands.”

5 U.S.C. § 553(e) states, “Each agency shall give an interested person the right to petition for the issuance, amendment, or repeal of a rule.”

Working with attorney James Buchal, a petition was drafted to Interior Secretary David Bernhardt and Agriculture Secretary Sonny Perdue that highlights the abuses miners have faced from overzealous state regulators.

As many of you know from reading our publication, the US Supreme Court declined to hear the People v. Rinehart case that dealt with the State of California’s requiring a permit for suction gold dredging and then refusing to issue such permit.

This was followed by the Bohmker v. Oregon case, where the State of Oregon banned motorized methods of in-stream mining. The US Supreme Court also declined to hear this case.

The six-page petition points out that the intent of Congress and federal preemption are being circumvented by states like California and Oregon.
From the petition:

“It is fundamentally both Departments’ duty to avoid ‘unnecessary or undue degradation of federal lands’ (43 U.S.C. § 1732(b); emphasis added), while managing federal land ‘in a manner that recognizes the Nation’s need for domestic sources of minerals’ (id. § 1701(a)(12)). Congress recognized that minerals (or energy resources) must be recovered where they lie, and that some level of environmental impact is necessary.  In particular, Congress has forbidden both Agriculture and Interior from issuing federal regulations which would ‘materially interfere with prospecting, mining or processing operations or uses’ of land claimed under the federal mining laws.  United States v. Backlund, 689 F.3d 986, 996 n.9 (9th Cir. 2012) (interpreting 30 U.S.C. § 612(b)).” 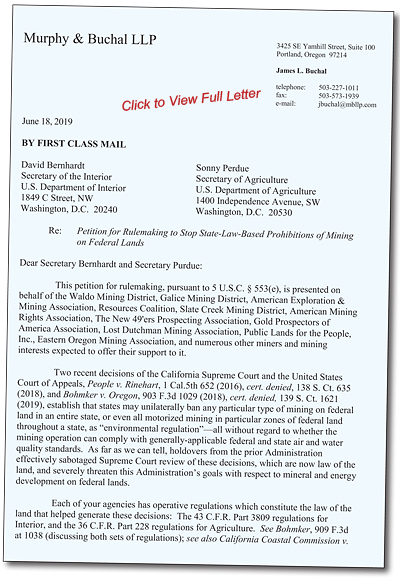 The petition seeks specific changes to existing Forest Service and Bureau of Land Management regulations to restore the intent of Congress and federal preemption.

This dovetails well with the legislative changes we’ve been seeking in Washington, DC. Although we would rather see the regulations changed via Congress to make it more difficult for another administration to reverse them, this action would definitely help provide regulatory relief in the near term.

Organizations that wish to support this effort are encouraged to do so by writing their own letter addressed to Secretary Bernhardt and Secretary Perdue. I’ve offered to collect them and forward them on to Tom Kitchar of the Waldo Mining District for so they can be presented to the agencies. Please try to get those letters to me sooner rather than later, but no later than July 25.

Support letters can be emailed to me at editor@icmj.com or sent by mail:
ICMJ—Petition for Rulemaking
PO Box 2260
Aptos, CA 95001

(The full “Petition for Rulemaking” can be viewed by clicking on the letter above.)

April 2011
One of the most asinine proposals in the SEIR is to require miners to state when and where they will be dredging. This information would be accessible to the public, which would make them prime candidates for getting their homes burglarized while they are out mining.

April 2012
A proposed constitutional amendment to raise the cap on mining taxes can proceed as written, a state judge ruled March 14.

California to Allow Suction Dredging in 2019?


There are a few questions you will need to ask yourself before you apply for a suction dredge permit from the State Water Resources Control Board.