The Bureau of Land Management (BLM) announced that the work done by more than 200 committees, advisory councils and boards is under review, and during this time all meetings have been postponed. This includes the 38 Resource Advisory Councils (RACs) in the western states.

The BLM utilizes RACs staffed by unelected officials to make land-use decisions regarding public lands, and these often conflict with the rights of miners and Mining Districts.

In March 2016, Clark Pearson, Joe Martori and I made presentations to a BLM Roundtable Committee in Ridgecrest, California on behalf of the Rand Mining District and the Minerals and Mining Advisory Council (MMAC). It was readily apparent many of the committee members had little or no knowledge of mining law and mining rights. The presentations resulted in the request for a Memorandum of Understanding between the Rand Mining District and BLM, and this opened closed lands and lifted many of the conflicting land use designations that had been placed upon the previously existing Mining District.

The proliferation of these unelected committees and their lack of understanding regarding mining rights has made it difficult for miners. Restrictions are often placed upon public lands within Mining Districts without consideration for pre-existing rights. MMAC administrators and national advisors have been working hard to educate these committees, but have only been able to make a handful of presentations so far.

MMAC met with some of the recent Department of Interior appointees in March of this year, which included high-level appointees for BLM, Fish and Wildlife and the Forest Service. They were supportive of MMACs efforts, and there is an opportunity to disseminate training videos and materials on Mining Districts and mining rights to all the various committees from the top down.

On April 26, President Trump signed an executive order requiring a review of dozens of national monuments dating back to 1996. This was consistent with MMAC’s recommendations made in person to a member of President Trump’s transition team and to several members of Congress earlier this year as several of the monuments were expanded specifically to stop proposed mining projects.

Former President Obama angered Utah Governor Gary Herbert and the Utah congressional delegation when he used the Antiquities Act in December 2016 to create the Bears Ears National Monument despite their objections. This single act placed over one million acres off-limits to mining, ranching, energy development and other uses.

Obama created or expanded 33 national monuments during his eight years in office, which pleased the environmental movement but stopped all resource development on over 550 million acres of land and water.

The executive order directs Interior Secretary Ryan Zinke to review all monuments created since 1996 of 100,000 acres or more. The Antiquities Act specifically requires that lands set aside should not exceed “the smallest area compatible with the proper care and management of the objects to be protected.”

While there is no precedent for completely revoking a national monument, several have been reduced in size by previous administrations.

The Department of Interior is requesting public comments be submitted regarding the monuments under review. You can submit your comments online at www.regulations.gov by entering “DOI-2017-0002” in the search bar and clicking “search.” You can also submit comments by mail: Monument Review, MS-1530, US Dept. of Interior, 1849 C St NW, Washington, DC 20240.

The chart below shows the monuments that are currently being reviewed. 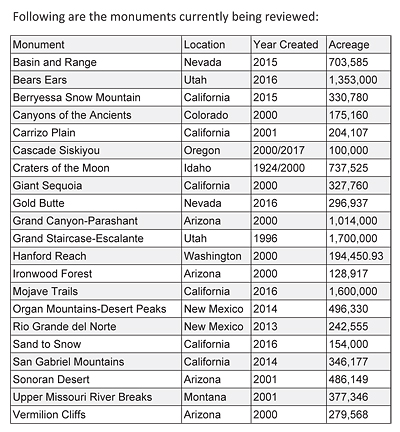 Secretary Zinke is also reviewing the 87,000-acre Katahdin Woods and Waters National Monument created in 2016 in Maine to determine whether adequate coordination and outreach was conducted.

There are five marine national monuments that are being reviewed as well.

Meanwhile, at the Environmental Protection Agency, EPA Administrator Scott Pruitt has notified roughly half of the members of the EPA Scientific Advisory Board that they will need to reapply for their positions if they wish to remain on the board.

During an EPA hearing I attended in February of this year, House Science Committee Chairman Lamar Smith (R-TX), stated, “The EPA routinely stacks this board with friendly scientists who receive millions of dollars in grants from the federal government. The conflict of interest here is clear.”

On May 12, the Trump Administration settled a lawsuit filed by the Pebble Limited Partnership over proposed development of a huge gold and copper mine in Alaska.

Pebble had sued the EPA over the agency’s collusion with environmental extremist groups and other mine opponents after the EPA moved to preemptively block the company from even applying for permits during the previous administration.

EPA Administrator Scott Pruitt stated this settlement will allow Pebble to apply for federal permits and go through the review process.

And the Trump Administration released its proposed budget, which would significantly reduce EPA funding from approximately $8 billion to $5.7 billion and reduce environmental grant programs by 35 to 40%.

• Giving power back to the people

There are several bills that are in the works to restore power to the people.

The Separation of Powers Restoration Act would reverse the 1984 Supreme Court decision in Chevron U.S.A. v NRDC known as the “Chevron doctrine.” This decision allowed courts to defer to federal agencies to interpret their own ambiguous regulations, and miners and other public land users have suffered ever since.

The Agency Accountability Act would require agencies to give any monies they collect for fines, fees and legal settlements to be deposited in the US Treasury. Agencies would have to stick to their budgets and would no longer be able to use these monies as their own private slush funds.

The REINS Act would put a stop to rogue agencies and administrations by requiring congressional and presidential approval of all major rules that have an economic impact of $100 million or more.

Record $11 Million Fine for California Mine

July 2013
State regulators imposed a record $11 million fine on the operators of a gold mine in the Sierra foothills east of Sacramento.

A 'Rare' Opportunity for America

All of which brings us back to the question of why we rely so heavily on China in the first place. America’s economy is heavily dependent upon energy and telecommunications, but does that require Chinese manufacturing? Clearly not.

Subscription Required:
The Bawl Mill   • Ask The Experts: What indicator rocks should I be looking for in northern Nevada?   • Ask The Experts: What to do with scheelite   • Ask The Experts: Small-scale drilling   • Quartzsite Gives Up Some Big Gold   • Prospecting After Winter Storms   • How to Stake Your Own Claim—Researching Mining Claims   • The Birthday Nugget Patch   • MMAC Update   • The Goldfield Mining District, Nevada—Part I   • Volume is the Key to Success   • Getting Started   • Melman on Gold & Silver   • Mining Stock Quotes and Mineral & Metal Prices