As we reported last month, the Environmental Protection Agency (EPA) is attempting to force Don Smith of Idaho to obtain a Section 402 permit  for suction dredge mining under the guise of the Clean Water Act. This is despite the fact that the Clean Water Act clearly states there must be the “addition” of a pollutant to trigger the need for such a permit.

Public Lands for the People (PLP) and I assisted Smith with an appeal which included a petition for rulemaking to clarify there is no addition of a pollutant with a suction gold dredge.

Anyone who has ever operated a suction dredge for gold mining is aware that there is no addition of a pollutant. In fact, a suction dredge is an extremely efficient reclamation device that removes pollutants—including heavy metals like lead and mercury—along with any gold the miner might come across, while adding nothing that wasn’t already present in the waterway.

States like California have an agreement with the EPA to handle these types of permits, but if you consent to the permit you would be labelling yourself as a polluter while agreeing to their outrageous conditions and fees. Under the language of the Clean Water Act, there should not be a requirement for a Section 402 permit nor for any similar type of permit issued by a state agency, and we are seeking clarification from the Trump Administration.

Tom Kitchar of the Waldo Mining District learned of Smith’s petition effort from PLP. With a little assistance from PLP and your editor here at the Mining Journal, Kitchar composed a well-crafted letter (shown) to support Smith’s petition for rulemaking. Kitchar also sought the support of additional mining organizations, associations, mining districts, businesses and local governments. All 28 groups listed agree that Section 402 of the Clean Water Act does not apply and no dredge miner should be asking a state or federal agency for such a permit.

We encourage your group or business to join this effort. Please contact us by phone or email and we will help you craft your letter. 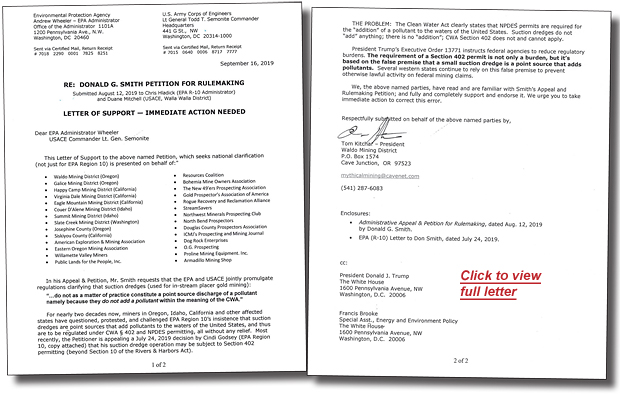 Detectors have been around for decades now. And with thousands of them swinging, many of the best or at least most likely nugget places have seen a swinging coil. The part that amazes me is that so many nuggets still get pulled out of these seemingly pounded places.

How to Use BLM’s New Mineral and Land Records System

This new map-based tool is far superior to the old version with lots of potential layers and information that a prospector can use in research.

Clearing the Nugget Trap with a Detector

On the day prior to Mother’s Day I was able to get out and spend a few hours prospecting. I wanted to try some new settings on my detector, and I had a place in mind to do that.

Who Jumped Whose Claim First?

At this point, stress raised my blood pressure and I was figuring out escape routes through the brush, but thought it best to continue the conversation.


After the hike and a quick snack break we gathered a few buckets of material to really dial in the drywasher for the most efficient recovery. This involves leveling the unit, setting the riffle box drop angle and regulating the speed in which the material is processed.