The Jenkins Mine Project—The Golden Rules of Science

I should start by saying that I’m no Albert Einstein, so if you’re in need of some deep scientific stimulation, you might want to try another section of this magazine.

I wasn’t so hot in science class as a kid, and I’m regretting spending most of that time in class catching up on sleep or daydreaming about being a big league ball player. Never in a million years would I have guessed that science or geology would be important later in life. Teenagers know it all, don’t they?

Gold prospecting seems easy enough, right? How difficult could it be? Place shovel in dirt and scoop dirt into pan. Swirl pan around, gently removing lighter materials and retaining the heavies. Use snuffer bottle to remove gold from pan. As funny as that might sound, that seems to be a very common approach. 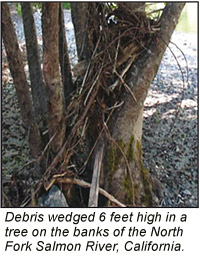 Unlike most of the western gold-bearing waterways, the rivers and streams here in Virginia do not experience an annual massive surge of water. This makes it a little more difficult to observe major pressure areas in the active water channels. I’ve been out to Northern California numerous times and personally witnessed the incredible annual “Spring Thaw.” A good friend of mine who was giving me a springtime tour of the Klamath National Forest in 2007 told me “look very carefully at this river right now. This is not what you will see in just a few months.”

I spent about a year or so bouncing around from place to place on Contrary Creek, my favorite local gold-bearing creek here in Virginia. There were good recovery days, so-so days, and some days that made me doubt my location, proficiency and equipment.

On 28 April, 2008, a series of wicked storms tore through Virginia. Twisters and high winds delivered incredible damage to the area and sent more than 200 people to local hospitals. Once the storms abated, I went out to the creek to see if there was any damage. What I saw during this visit would change my entire prospecting philosophy.

I witnessed, for the first time on this little creek, a forceful storm surge and major high and low pressure areas. Even though this was hardly considered “a 100-year flood,” the normally shallow and peaceful creek bed was now a deep, turbulent mix of rocks, mud and debris. I was awestruck at the speed of the current and the forcefulness of the surge. I sat on the rocks under the bridge easement and watched as Mother Nature had her way with that channel. A voice popped up in my head, “Gold is on the move.”

Most of the creek channel is fairly straight. Within the mile of creek channel between the bridge and manmade Lake Anna, there are only a few places where the creek gently swings left or right. I climbed up on the high banks of the creek and made my way down to the first gradual bend. All of the features I had come to recognize in the creek were either covered by water or completely gone.

The slight dogleg left bend was hardly gentle at this point, and new areas of high and low pressure were easily observed using the floating debris in the water as observation points. I recalled the drawings and diagrams of high and low pressure areas that are commonly included in gold prospecting books and articles. As I sat there on the banks, I recalled the great gold I’ve found in that creek, and then I told myself, “David, you’ve been digging in the wrong areas all this time.”

Science is definitely intertwined with gold deposition. But for those of us who slept through science class, the terms and definitions can be quite intimidating. Fluid particle flow? Streamlines and streaklines? Concave, convex, centripetal force? What the heck is helicoidal flow? Who is Bernoulli and why does he get to have his own principle? 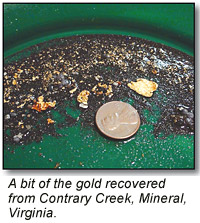 It all boils down to the basics of reading a stream, and those basics started to make sense as I sat there on the banks and observed the action in the channel. However, what clicked in my head that afternoon was not “how to read a stream,” but “you have to get out there and read the stream when it is moving!”

I was always told to go from inside bend to inside bend, and that gold and other heavy materials will drop out of the current in areas of low pressure. Some of the specific questions I had were concerning pressure zones on hardly noticeable bends, and exactly how large these low pressure areas might be. The only way to answer these questions was to actually witness the pressure areas.

I left my perch on that first bend and made my way downstream to another slight curve. In this case, the curve was completely gone and the creek was simply jumping the curve and slugging downstream in a straight line. There was, however, a new low pressure area just after the curve. During normal flow, this area was a dry gravel bar. 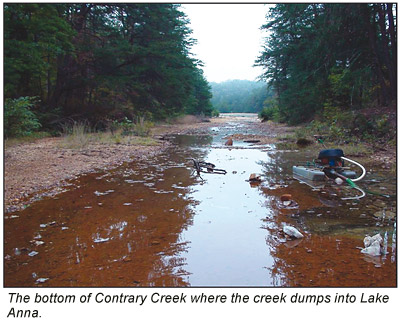 I needed more time on the creek that day and begged the sun for just one more hour, but twilight came upon me. There was zero compliance and the shadows became larger. I made my way back upstream and navigated through the briars on the tall banks of the raging creek.

All of the old timers who have been prospecting on this creek for decades say that the gold is spotty, and that there simply are no pay streaks in this creek. What I did know was that I had spent the last year or so digging in the wrong parts of the creek.

Once at home, I downloaded all the photos and video I took that day. Doing some online research on horizontal pressure areas, I stumbled on this quote by Sir William Bragg: “The important thing in science is not so much to obtain new facts as to discover new ways of thinking about them.”

That quote hit home. The next weekend, I started a two-year project on Contrary Creek. I was determined to go back 20 years and revisit science class. This time, I would stay awake.

-- to be continued next month

July 2004
It is with regret that we let our readers know about the passing of four respected members of the mining and prospecting community who have been lost in the past several months.

November 2016
On a similar vein, while the number of new non-farm jobs created rose by a modest 156,000 in September, it must be pointed out that Goods Production Payrolls rose by only 10,000 jobs while much lower paying service jobs accounted for the other 146,000.

September 1999
No single factor has been as important in the control of inflationary pressures over the past few years as the decline in commodity prices. As long as the cost of raw materials was declining, industry was able to produce goods with minimal increases in price.

The next morning, I retrieved the compressor and again attacked the sticky head bolt. As if by magic (and some applied physics) the head bolt sighed and finally broke loose.