The Minerals and Mining Advisory Council had a busy month, assisting miners in getting their Mining Districts organized in multiple states and making another trip to Washington, DC, to garner support for their bills and amendments.

In late June, I headed off to Wyoming following an invitation from the Wyoming Prospectors Association (WPA) to their annual gathering outside of Riverton. The group has been financially supporting MMAC, but Randy Hutchison, former WPA president, requested an in-person presentation if possible to help build some momentum toward organizing/modernizing their Mining Districts.

WPA members are dealing with the same issues as many other miners—excessive regulations, approval delays for Notices and Plans of Operation, excessive bonding requirements, conflicting land designations, sage grouse habitat, and the list goes on.

Wyoming has an extensive mining history and Mining Districts were established across the state wherever a valuable metal or mineral deposit was found. But like many other mineral-rich locations, the miners allowed their Mining Districts to fall into disarray.

In a little less than an hour, I explained the power of Mining Districts to a group of around eighty miners and the presentation went very well, with some quality follow-up questions asked by those present. I also provided an update on MMAC’s efforts in Washington, DC, and the progress made toward passing MMAC’s legislation to reestablish mining as a priority for public lands.

Some of the original Mining District bylaws for districts in the area had already been located. The members seem to clearly understand how Mining Districts work and the steps they need to follow to modernize their districts. We expect many of these districts will be modernized with the assistance of MMAC in the immediate future.

The group had previously offered to reimburse much of my expenses for this trip. I politely declined and the group voted to make a sizeable donation to MMAC instead.

My daughter and I spent several days with WPA members, doing a little prospecting, visiting mining sites in the area, and gathering information for an article on a small operation running nearby. (You'll see the article elsewhere in this issue.) 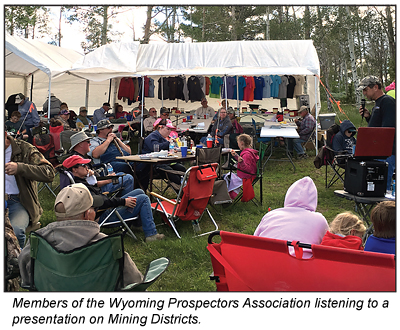 While I was in Wyoming, MMAC National Advisors Clark Pearson and Joe Martori were in Washington, DC, which was MMAC’s third trip to Congress this year. The main focus this time was to garner support from the Senate side of Congress for MMAC’s proposed bills and amendments.
MMAC met with dozens of Senators and squeezed in a few additional meetings with House members and the US Geological Survey.

Pearson called the trip, “The most productive so far. We are courting over a dozen potential sponsors now. We had some members call us back for additional meetings and several of these lasted over an hour.

“Trying to get a bill through Congress takes time and persistence, and MMAC is committed to getting it done.”

Following the trip to DC, Joe Martori is scheduled to travel to New Mexico and Arizona to assist other Mining Districts.

You’ll also see a Public Notice on our website for a meeting of the Coeur d’Alene Mining District  in Idaho.

Dozens of Mining Districts have already joined MMAC. Many of the overlying land designations and other restrictions have been lifted, and many roads and trails were reopened within these MMAC-assisted districts. Once the first bill passes, traditional, organized Mining Districts will be given additional responsibilities and be allowed greater control over public lands within their districts. 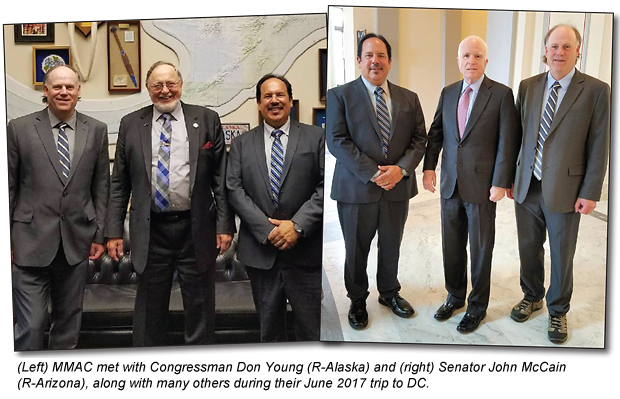 If you are a claimholder, it is highly likely your mining claim is within a traditional Mining District. If your Mining District is in disarray, you need to get that district modernized so you are not left behind.

You are certainly welcome to modernize your Mining District on your own, but those who join MMAC will receive assistance to help them get federally recognized, and federal recognition is the key component.

Details for organizing/modernizing your Mining District were published in the “MMAC Update” article in our April 2017 issue beginning on page 21.


The intent is to rein in abuses by rogue agents of the Forest Service who have an anti-mining agenda whereby a miner can get a bad federal agent fired.


During discussions with other property rights advocates and members of the current administration, Karen Budd-Falen’s name was mentioned many times as a possible director for the Bureau of Land Management (BLM).

December 2015
We have been playing defense for 100% of the game, and now we are finally playing some offense.


PLP is also looking toward meeting with the incoming chair of the Senate Energy and Natural Resources Committee, and it appears it will be Senator Barrasso (R-Wyoming).


Pearson called the trip, “The most productive so far. We are courting over a dozen potential sponsors now. We had some members call us back for additional meetings and several of these lasted over an hour.”

Subscription Required:
The Bawl Mill   • Ask The Experts: How would you go about evaluating a silver deposit?   • Legislative and Regulatory Update   • How to Make a Rock Sled for Dredging   • More on Detecting Pocket Gold   • The Rochester Mining District of Nevada   • Early Summer Mining in Wyoming   • US Rare Earths: We Have & We Have Not   • National Hall of Fame Names 2017 Inductees   • EPA Reopens Comments on Pebble Project   • Over the Divide: Wayne (Jerry) Keene 1934-2017   • Melman on Gold & Silver   • Mining Stock Quotes and Mineral & Metal Prices