(Author Mike Lowen reported on his efforts to set up a processing facility in the Sierra Madres near Sonora, Mexico, in our April, July and September 2007 issues. In this latest update, production is finally underway.)

The day has finally arrived. After five long years, much tribulation and many trial runs, today is to be a full day of production. Rich, grayish concentrate is flowing in two dark streams down both of our shaker tables. This pulp stream is divided into two parts, as the width of the No. 1 concentrate makes it too wide for only one stream. The pulp emitting from the dual jig above the table is rapidly separating into the elements and compounds common to the ore from our mine in the high Sierras surrounding us. The tailings from the jig, mostly dirt and dust, pass on to the Knelson concentrator where any remaining values are trapped. The tailings from the Knelson then flow into our slime pit.

We will be taking small samples all along the line every 30 minutes or so, to compare the actual material characteristics and values we are seeing today against the original tests and assays from our laboratory.

This pulp began its journey yesterday in our primary crushing circuit, which is comprised of a 10” x 24” jaw crusher coupled with a secondary 16” roll crusher capable of reducing the ore to 3/8” to 1/2” minus product. We estimate we have a 100 TPD crushing capacity.

When we bought the jaw crusher in Missouri, we found markings on the electrical box and equipment showing the crusher had belonged to Peabody Coal Co. at one time. Going to Missouri and getting such a monster to the border and then across the border to our mill was a story in itself. 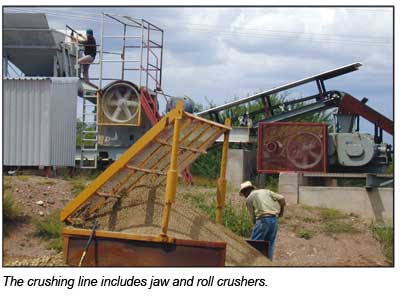 At one point, in Agua Prieta, Mexico, our border crossing point, the crane operator was attempting to lift the crusher with some 3/8” chains. As he took up slack with his winch, the 3/8” chains, which he assured me were perfectly capable of lifting the crusher, broke and the crusher fell on the bed of our hired hauler’s truck. Needless to say, it was the truck that suffered the black eye. The truck driver just shrugged as if to say, “It is not my truck.” With some encouragement, they finally found an old rusty 1” cable to replace the chain. Sure enough, it did the trick. Soon we were tied down and headed inland across remote roads to our mill.

We found the roll crusher in a pasture near the mill. A partial nameplate revealed it was a Cedar Rapids 16” model. When we checked with the ranch owner, he told us his father at one time had a mine and used to process his own ore. We discovered it was a pretty good feat to move a very heavy roll crusher, abandoned for 30 years and half buried in an outback pasture. No one had a loader around the area that was big enough to lift it, so an earth ramp was built. With a winch truck we managed to haul it aboard for transport to the mill. Once at the mill, under the magic hands of our mechanic, Rodrigo, we soon had the second part of our primary crushing mill in place and ready to rock and roll.

Meanwhile, back at the mill, a steady stream of pulp flows from the ball mill into the piping system. This system, with its valves, allows the channeling of the pulp into any or all of our concentrating devices, namely the flotation trailer, either or both of our two shaker tables and one Knelson concentrator. 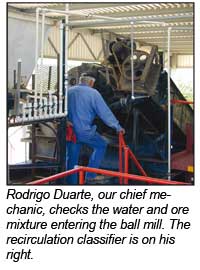 Our entire process is running with only three people. Rodrigo, our mechanic, is operating the crushing trailer. Raul is manning the two gravity tables and the concentrator. Jorge is filling in wherever he is needed.

Our flotation trailer has been rebuilt, tested and run at various times over the last two years, but none of us felt we knew enough about flotation to run it until Francisco volunteered. After spending three days running the unit along with our consulting engineer, he assured us, “I can do it.”

The engineer returned to his home near Hermosillo the next day. I said to Francisco, “Ok, show me.”

Within 30 minutes he had a steady flow of concentrate heading into a 50 gallon drum. I wouldn’t say he is a master yet, but anything we throw at him gets organized and done.

This morning the temperature stands at 94°F at 7 AM, and Rodrigo has started our 125 KW John Deere generator. Standing at the control center, he gives three blasts from the safety horn signaling the mill is starting up. All the various pumps, conveyors, the third jaw crusher and cone crusher rumble into motion and soon ore is passing through the crushing system into the ball mill.

Raul, our gravity table operator, has already begun his day by starting the water recycling pumps in the slime pit and lagoon as well as the conveyors that de-water the tailings and transport them into our tailings bin. As recycled water enters the two tables, he is adding fresh water to the laundry chute and has just signaled that he is ready to receive pulp. Rodrigo turns on the valves for tables 1 and 2 and presses the switch for the pulp pump. Rapidly the pulp enters the lines and has begun to flow to the tables.

Within seconds, rich concentrate began to form on both tables, spread according to the specific gravities of the various elements and compounds our ore is composed of. Lead concentrates are at the top, and under it comes silve 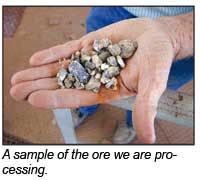 r, some zinc, ferrous sulfides, and a mixture of silica, quartz and dirt collected along the way. While not as efficient as our flotation trailer, which reaches 90+ percent recovery, we are still getting around a 70 percent recovery using the two tables and the Knelson concentrator.

Our maximum throughput is 8 tons per day in our pilot mill, but we haven’t been pushing any schedules or goals as our employees have never worked under that type of pressure. The one time we set up a schedule, one employee got so nervous he became ill from the stress.

We have found the inhabitants of our Pueblo to be very laid back. After centuries, this culture is pretty ingrained. Mañana means maybe. Mañana, mañana might mean early, but do not expect it to be tomorrow.

Goals and schedules will come along as everyone becomes part of our team. We have six employees at the present time, all great people who have been with us since we started with the exception our new supervisor, Francisco, who came onboard earlier this year. He has quickly proven his value and ability to get things done timely.

Francisco came to us when the maquiladora border factory of a large US company closed their division in Mexico. He possesses a great knowledge of mechanics and our processes as well as the concept of team cooperation in meeting goals. I like the way he tells me, “It will come together, Mike. Don’t be nervous.” 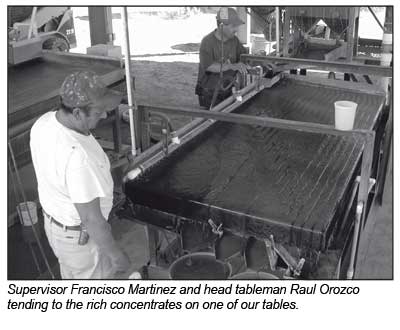 The ore we are running today, as indicated by our laboratory assays, should be running 3% lead and 11 ounces of silver per ton of head ore. We expect this to concentrate down to 25% lead and 220 ounces of silver per ton of concentrate. This is indicative of an operation that would have not been very profitable without the rapid rise in silver prices. Now it keeps us in beans, but every once in a while along comes a bit of gold and out comes the carne.

In addition to running our own ore, we are also providing a custom milling service for the many mines in the area as there are no other mills available nearby.

On the mining side of our operation, all of the dirt roads to our remote mines in the Sierra Madre mountains were washed away in the vicious rains and floods of the monsoons two or three years ago. With the help of a local road builder, using day laborers, picks and shovels, and a bulldozer, we are slowly rebuilding the roads to our principal mine. This is a mine that has not been worked since the 1600s. Artifacts abound in the area and tales by old timers here in Arivechi tell of large amounts of silver taken by pick and shovel alone. While we may mine the earth, the mine will certainly mine our pocket. 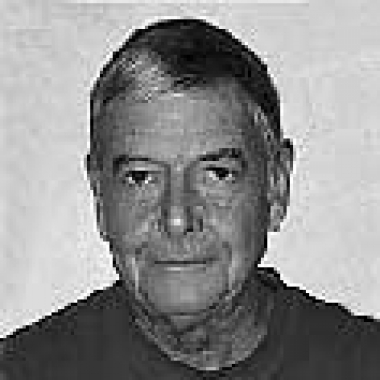 Silver Bonanza in the Sierra Madre: The Glorious Past of Batopilas—Part II

November 2007
John Kyrk was a prospector who appeared in Batopilas about 1863. Little is known about him, but he had the foresight to pick a mine just 59 yards north of the San Miguel property, and dug a tunnel that ran parallel with the San Miguel in the same mountain, cutting the same veins.

September 2016
• What comes around goes around...
• Bombs away for Texas nuclear materials inspection

June 2001
Nicolet Minerals expected to be mining zinc and copper from an underground quarry in Wisconsin by now. Instead, a state review of the project is only 75 percent completed after seven years, a top state regulator said.

June 2001
Friends of Don and Marlene Doran often tease them about their hobby of searching for unique rocks. Now they are the ones laughing.

June 1999
Soon after the rich gold discoveries at Ballarat, near Death Valley, prospectors fanned out all over Southern California's Mohave Desert. Minor discoveries were made in many dry washes, gullies, and desolate areas, but no discovery has had the impact of the one that Frederick Mooers, John Singleton, and Charles Burcham, made in 1895.

December 2003
Compared to California, Arizona has virtually no oil seeps. But, the great Permian Basin of West Texas has virtually none either. Arizona has something that neither California nor Texas have, and that is public lands that are open for leasing. The northern half of Arizona has more seeps and is thus of greater interest, but it would be foolish to disregard the southern half because giant oil and natural gas fields could underlie some of the broad desert valleys.

...we will continue our examination of the rich streams and mining districts, and then take a look at some of the big nuggets that have been found here.