Just prior to press time, we made our way to Sacramento for the second public scoping meeting to comment on the first draft of the California Department of Fish and Game (DFG) suction dredge permitting program for the new Environmental Impact Report.

The meeting room was filled with approximately 250 miners and prospectors. (Those who attended the first scoping meeting in Fresno the previous day stated there were about 80 people in attendance.)

The meeting began with an informal “meet and greet” where attendees could ask questions of staff members prior to the formal meeting.

Michael Stopher, environmental project manager for DFG, opened the meeting by explaining how the current moratorium on suction dredging came about as a result of SB670 and the lawsuit filed in Alameda County by the Karuk Tribe of California.

Michael Stevenson, project leader with Horizon Water & Environment explained the rulemaking process. Horizon is the firm that was hired by the State of California to handle the EIR process and ensure that the process follows the rules set forth in the California Environmental Quality Act. He stated that all questions and concerns gathered by mail, email, and in the public scoping meetings will be compiled in a scoping report, and each question or concern will be answered by a staff member. The next step will be a draft EIR, which will come in the summer or fall of 2010, followed by another opportunity for public input, including public hearings where concerned miners will be allowed to comment on the record. A final EIR is not expected until spring 2011, which will be followed by a Notice of Determination and CEQA findings.

When the actual meeting began, DFG controlled the format and frustrated miners by not allowing us the opportunity to speak in a standard question and answer format. Much to the dismay of those in attendance, we were asked to fill out cards with questions for the staff to review and answer. No follow up questions were allowed.

Stopher answered many of the written questions himself, with assistance from the staff of Horizon when needed.

At least one serious question was answered during this period: A Horizon staff member declared that methylmercury is not a concern for suction dredging regulations. He explained that mercury does not become methylmercury after it is passed through a dredge. 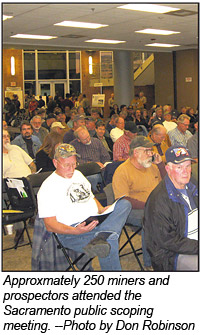 Stopher refused to answer several important concerns. He stated he could not answer questions regarding the federal lawsuit filed by Public Lands for the People that would enjoin the State of California from enforcing SB670. He also refused to define the term “deleterious” as it applies to the effects of suction dredging. Stopher stated these items were currently being litigated so he was not allowed to discuss them.

Stopher said that some suction dredge miners who held permits in the past year will be receiving surveys. The surveys will ask for detailed information regarding spending activity and the amount of gold found so the agency can determine the economic impact of suction dredging in California.

It is extremely important for those who receive surveys to list all related spending and account for every speck of gold found so the State can get a true picture of what miners contribute to the economy of California. Although this information is not required by CEQA, it is considered as a factor later in the rulemaking process.

Miners will not have to wait until 2011 for the EIR to be completed before they get back in the water if the federal lawsuit filed by PLP is settled in favor of the miners before then.

Be sure to check the “Recent News” section of our website for more updates.

The Art of Underwater Nugget Shooting

There is a surprising amount of detectable gold under the water’s surface. The right tools make it much easier to find, and with a little patience and practice you can take advantage of this underappreciated bonanza.

New Study of the Formation of Nuggets—Part II

Last month we took a look at the origins of coarse gold nuggets and the results of some new science about how they form. This new information pointed out that many nuggets once thought to be of secondary origin are formed under hot conditions...

From Vietnam to Wedding Bands

It’s a common symptom of gold fever for miners to be very hesitant to let go of gold they’ve found or even have it made into jewelry. I confess, I suffer from the same incurable disease!

Looking for Gold in British Columbia

September 2003
Mother lodes and placers get found, finds become prospector’s stories, stories become legends, legends become myths, and myths become the fodder for armchair prospectors and daydreams. Over the decades, the Canadian province of British Columbia has had more than its share of legends and myths ascribed to it.


When governments are hit by a barrage of such economic news, they usually react by attempting to stimulate economic activity by spending money, as some might say, “like drunken sailors”…

Free:
Golden Hope's Bellechasse Gold Project   • Where to Prospect for Gold in Colorado