In terms of providing a high level of support for mining enterprises, the province of Quebec ranks among the elite governmental jurisdictions in North America, and it is within this province that a Canadian junior mining company, Toronto-based Golden Hope Mines, has focused their efforts.

What makes Golden Hope’s situation somewhat different from many other companies active in that province is the fact that their major property, the Bellechasse (Timmins) gold project, is not located to the north and west of the St. Lawrence River, as are most other mining projects within “La Belle Provence,” but rather to the east and south of that great river in an area known as the “Beauce” (pronounced “boce”).

The Beauce is located in the Appalachian Mountains in a geologic region characterized by potential economic ore bodies hosted in zones of fracturing and brecciation in the older intrusives or other pre-existing competent rocks. Although the region has been somewhat overlooked in recent years, the Beauce actually has a lengthy history of mining activity, going back to 1828, when the first gold rush in North America took place in the form of alluvial mining along the Gilbert River. After a lengthy quiet period, Eastern Metals discovered a gold-copper-nickel-cobalt deposit in 1949, and in 1950 gold-bearing quartz veins were found on the Ascot property located within the company’s present holdings.

Golden Hope’s Bellechasse claims cover some 110,000 acres stretching along 110 kilometers (67 miles) and their particular areas of interest are the Timmins gold deposit comprised of “Timmins 1” (T1), “Timmins 2” (T2), “Ascot” and the “88 Zone” as well as the “FSG Zone,” a polymetallic target that contains a new target area developed through a relatively recent geochemical identification process. The company has chosen to focus their current efforts on the Bellechasse (Timmins) Gold Deposit.

Exploration activities have been directed through their field office in the town of Sainte Justine, located about 110km east of Quebec City and within sight of mountain ridges across the border in Maine. During our late October visit to the project area, Chief Geologist James Tilsley, P. Eng., served as our escort. We also had the opportunity to interview company President Frank Candido at length during this visit.

Tilsley explained that the four ore zones at Bellechasse appear to be part of one mineralized system, separated by intrusive core, sediment roof pendants and/or fault offsets. The mineralized zones have been traced through an area measuring approximately 150 meters by 450 meters. 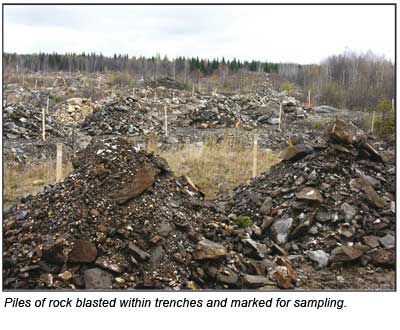 While some exploration work took place at the Bellechasse project area from 1950 through 1976, intensive exploration efforts began in 2003-2004 when the T1 mineralized zone was drilled in a joint venture effort with then partner Osisko Mines. Osisko later dropped out to focus their efforts in western Quebec, and Golden Hope raised sufficient capital to proceed with a “down the hole hammer” drill program in 2006, which revealed the nuggety nature of the gold mineralization. This was followed up with an airborne survey over both Bellechasse and the Lac Etchemain area in 2007, along with additional drilling in 2007 that further defined the edge of the T1 mineralized intrusive.

Since mineralization at Bellechasse occurs close to the surface, the company has been able to use surface trenching as an efficient and cost-effective exploration tool, and a substantial portion of their 2009 work went into the development and completion of a bulk sample program.

One of the reasons for proceeding with a sizeable bulk sample is that company geologists believe previous drill sampling work may have missed some of the gold found in narrower veins and only a larger sample could be effective in discovering the true quality of the ore. Tilsley indicated that previous drill core samples had returned overall values of about two grams per tonne, but he believed the current large trenching program could duplicate trench sampling on the order of the 3.8 grams per tonne achieved in a 2007 trenching program.

Work on the new program began during summer 2009, with the goal of processing 700 metric tonnes of rock. By late fall the program was completed across seven new trenches at T1 and T2 and rock obtained from the trenches was crushed on-site by a mobile crushing and screening plant.

We were able to climb a low hill and observe the extent of the stored material, which has been placed in 84 bulk sample heaps of from five to fifteen tonnes in a neighboring flat area. Each mound was marked and then further processed in a nearby facility to create smaller samples to be sent to a commercial assay laboratory. As this is written, samples have already been processed and sent to a lab, and Golden Hope is awaiting assay results.

The company is also involved in a revolutionary new program, known as the “SGH Project,” developed by Activation Laboratories Ltd. of Ancaster, Ontario. As explained by geologist Tilsley, SGH is a deep penetrating geochemistry that involves the analysis of surface samples from potential mineral or petroleum targets. The program is designed to indicate mineralization at depths in excess of 200 meters and provide a cost-effective method for anomaly identification that can then be used in tandem with geophysics to improve success rates.
<img alt="Blasted piles awaiting initial crushing down to a maximum of 2" "="" src="/UserFiles/file/200912/Blasted-Piles-23.jpg" _cke_saved_src="/UserFiles/file/200912/Blasted-Piles-23.jpg" align="right" height="330" hspace="5" vspace="5" width="400"><br> Using this technique, Golden Hope was able to identify a new prospective area, which has been identified as the “FSG Area,” where four strong gold and base metal anomalies have been identified. Weather permitting—and Quebec is noted for long, snowy winters—the company plans to begin development work at FSG during November 2009. This program will include stripping, trenching, blasting and sampling. <br> <br> Golden Hope is combining all historic data along with current results in order to complete an NI 43-101 compliant resource estimate for Bellechasse as soon as possible and later programs might include bulk sampling to a depth of 100-200 feet to further confirm grades. <br> <br> Candido stated that one of his goals was to raise awareness of the Beauce area itself since he believes that it holds significant development potential, and should a number of other companies get involved, a “regional” <img alt="Samples are taken out of marked piles of crushed rock; and samples are processed down to a fine grind, then sent for standard total pulp metallic assaying" src="/UserFiles/file/200912/Sample-Piles-24.jpg" _cke_saved_src="/UserFiles/file/200912/Sample-Piles-24.jpg" align="middle" height="330" hspace="5" vspace="5" width="600">excitement similar to areas such as “Eskay Creek” in northern British Columbia or the “Ring of Fire” area near James Bay in Northern Ontario could take place. He noted that several companies were newly active in exploration and staking in the area, and similar further developments could serve two purposes; to increase the geologic knowledge of the region and also to facilitate the raising of future capital requirements.<br> <br> At present, projections would be for an open-pit operation utilizing mineralization located close to surface, but Candido mentioned that further plans included drilling at depth to between 500 and 1,000 meters to increase the potential for future underground mining and also to further explore the new targets identified through the SGH geo-chemical program. He did make clear that at least for the present, Golden Hope would focus on gold rather than polymetallic bodies.<br> <br> One other area of company interests is near the Chaudiere River, which was also the site of early 19th century alluvial gold operations. Company geologists noted that these gold placers lay down-drainage from serpentine ore bodies and previous investigation suggests that gold is associated with these ultrabasic rocks. Copper, nickel, cobalt and platinum have been associated with ultrabasic rocks, but Candido noted that in line with company strategy, the focus will remain on gold development for the present.</p> <p style="text-align: center;">_______________</p> <p><em>Further information is available at </em><a href="http://www.goldenhopemines.com" _cke_saved_href="http://www.goldenhopemines.com"><em>www.goldenhopemines.com</em></a><em><img alt="" src="/UserFiles/file/endpick.jpg" _cke_saved_src="/UserFiles/file/endpick.jpg" align="right" height="19" hspace="5" vspace="5" width="20"></em></p><p></p><p></p><p></p>

Many prospectors thought that Nevada was all prospected out following all the rich discoveries of the 1860s and 1870s, and what was there to be found had already been found.

February 2009
Golden Eagle International announced is reached an agreement with Queenstake Resources back on October 14, 2008, to reopen the Jerritt Canyon mill north of Elko, Nevada.

Metallic Trash—Scourge of the Prospector

I had been busy representing the Prospecting and Mining Journal this spring, but prospecting season finally arrived and I’ve been out digging for nuggets—I’ve even found a few. I know a number of prospectors who are armed with new metal detectors and headed to the hills to look for that precious yellow stuff.

September 2000
Almost 200 miles northwest of Las Vegas, Nevada, Gold Point was developed initially as a gold mining community in 1868. Like most mining camps, it experienced a typical boom-to-bust cycle, and by 1882, Gold Point was clearly on its way to becoming just another abandoned ghost town.

Looking for nugget laden bedrock in forested mountain regions, you first need to explore the banks of the gold-bearing streams and look for the bedrock that is exposed as this is your starting point.

Free:
Where to Prospect for Gold in Colorado   • Strong Support at Suction Dredge Meetings