During the past decade, silver has been in a pronounced bull market, which many analysts attribute to its unique attractions as both a monetary and industrial metal. One Canadian junior miner, SilverCrest Mines Inc., is working actively to take advantage of silver’s favorable performance by steadily expanding production at its flagship Santa Elena Mine while simultaneously exploring and developing resources at Santa Elena and its other properties with emphasis on the company’s new La Joya Property.

I was fortunate to be among a group of analysts, geologists and journalists invited to take a first-hand look at the results of SilverCrest’s work in advancing their projects and preparing for the future. We were able to visit both Santa Elena, located in the northern Mexican state of Sonora, and the developmental La Joya Property, Expansion plans at Santa Elena for 2012 - 2014 include construction of a decline to access underground resources; building a 3,000 to 3,500 tonne per day conventional mill and, by 2014, combining mill feed from their present open pit mine with underground resources—all leading to a planned doubling of production.

Santa Elena is located some 90 miles NE of the city of Hermosillo and about a four hour drive south of Tucson, Arizona and is adjacent to the community of Banamichi. Hermosillo is a particularly impressive and vibrant Mexican city and, combined with Tucson, both cities are fully capable of providing a wide range of mining supplies and experienced personnel. Santa Elena is accessible by paved roads and has an excellent infrastructure with power and adequate water supplies.

Santa Elena and Cruz de Mayo have seen mining activity dating back to the late 19th century when initial production took place. Several underground workings were opened by early in the 20th Century and four adits were constructed at Cruz de Mayo. However, active mining soon ceased upon the onset of the Mexican Revolution of 1912, with only sporadic interest until SilverCrest entered the picture in late 2005.

As a result of the company’s exploration work, in January 2009 they were able to establish Probable Reserves of 6,541,950 metric tonnes grading 1.61 grams per tonne (g/t) Au and 56.7 g/t Ag containing 339,600 ounces of gold and 11,927,100 ounces of silver respectively at Santa Elena. Based on these reserves the company succeeded in obtaining construction financing, and they have now entered commercial production using open pit mining methods. Thanks to increasing production at Santa Elena, the company was able to announce in January 2012 that they had been able to retire their $12.5 million construction loan 21 months ahead of schedule.

The open pit at Santa Elena is a particularly impressive site with dual ongoing operations involving blasting. One area of activity is designed to strip away waste rock, which is immediately hauled to a disposal area, while 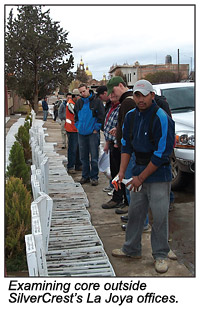 the other involves active mining of resources, which are transported directly to the recovery facilities. While we were visiting, a major in-pit blasting took place for waste removal and we also observed additional blasting on a new adit and decline currently under construction.

Drilling will begin in Second Quarter 2012 to further test and potentially expand the underground resources at Santa Elena, which remain open in most directions.

SilverCrest is also working to advance their La Joya Property where exploration work has indicated silver-copper-gold mineralization along a strike of approximately 1.5 miles in length and 300 to 500 meters in width. Company geologists report mineralization is occurring along a series of wide (up to fifty meters), near vertical stockwork veins and structures crosscutting shallow flat lying skarn deposits up to 30 meters thick.

Prior exploration at La Joya took place from 1981 through 2006 by Luismin, Bolden and Solid Resources during which time 56 drill holes covering 15,720 meters took place.

The company acquired their interest at La Joya in November 2010, and quickly enlarged their concessions from 1,625 hectares to a present total of 8,473 hectares and has the right to ultimately acquire 100% ownership of the project, subject to a 2% Net Smelter Return (NSR). The company immediately began exploration programs and, based on 27 recently drilled core holes and several verified historical drill holes, a new Resource Estimate for La Joya was released during January, 2012 which showed Inferred Resources of 57,940,000 tonnes grading 28 g/t Ag, 0.18 g/t Au and 0.21% Cu, containing 333,400 oz. Au, 51,348,000 oz. Ag and 270,296,000 pounds of Cu using a cut-off grade of 15 g/t Ag equivalent. 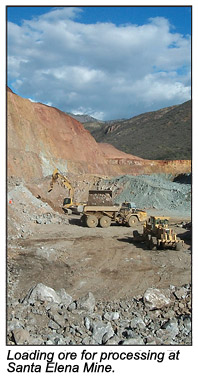 million pounds of copper or a total of 86.4 million ounces silver equivalent.

SilverCrest has completed 17 holes of a planned 80-hole Phase II drill program, that will entail an eventual 15,000 meters designed to test the 1.5 miles of the mineralized trend as well as three adjacent targets with the ultimate goal of establishing an open pit mining operation.

One of the more interesting prospective areas at La Joya is known as the Coloradito Target. Six historic holes were drilled at Coloradito and company COO Eric Fier noted that, “The Coloradito area shows potential for a large bulk tonnage Molybdenum, Tungsten, Ag and Au system with Cu, Lead and Zinc credits. Planned Phase II drilling during 2012 will further test the extent of mineralization in the Coloradito area.”

The company’s immediate goal is to double the resource figures from historic estimates, and a new compliant Resource Estimate is presently scheduled for early Fourth Quarter 2012.

Safety at all of its properties is an important concern for SilverCrest. During a presentation at Santa Elena we learned that many safety programs had been introduced including measures such as training new personnel in safety procedures; enforcement of all international safety laws and regulations; providing on-site medical facilities; conducting safety and first aid courses; inspecting for alcohol and illegal drugs; instruction in hazardous materials handling; and safety program follow-ups.

These procedures appear to be working as the company recently passed the 500,000 man-hour mark without any loss of time due to accidents and/or injuries.

SilverCrest is also conducting extensive environmental work in order to protect ecological balance and to minimize any environmental impact due to their various operations. In addition, they have filed all appropriate reclamation reports detailing procedures that will be put into effect following termination of mining activities.

A Human Resources department is also maintained to manage employee relations, comply with Mexican labor laws and conduct all employee training. The company also conducts a high-priority, active program of maintaining relations with nearby communities. It is also worth noting that the Santa Elena Mine is a major employer in the community of Banamichi with 240 workers including contractors and that number is expected to increase as future expansion programs are put into effect.

Prospecting for Copper—What to Look for on the Outcrop

For the prospector, knowing what oxidized hydrothermal alteration looks like in the field is an important exploration tool.

In this article, part of an ongoing series taking a look at critical metals in our economy, we will examine the mining and use of the metal zinc.

There are currently about 170 commercial-scale placer operations in Alaska. Most of these are small operations with just a few people working; they are often family affairs that operate seasonally only during favorable weather.

In this second part on cobalt, I will take a look at the various types of cobalt deposits and how you can prospect for them. Who knows—perhaps the next big cobalt strike will be yours.

September 2014
The $800 million project will provide 300 jobs during production. It will be the only US mine where nickel is the primary targeted mineral, with about 360 million pounds to be extracted.

January 2011
The Lucky Friday is already one of North America’s deepest hard-rock mines. Now, the 62-year-old mine is about to get much deeper.

Subscription Required:
The Bawl Mill   • Ask the Experts   • Ask the Experts   • Prospecting Homonyms   • Revisiting an Old Mine in Idaho Reaps Rewards   • Today's MSHA   • Following Clues to a Lost Gold Deposit—The Northern Extension of the Cedarberg   • Bering Sea Gold—Part I   • Safety With a Tax Deduction   • Who Says You Have to Own a Claim to Find Gold?   • US Policies Holding Back Arizona   • Judge Gives OK to Nevada Mining Tax Initiative   • Melman on Gold & Silver   • Mining Stock Quotes and Mineral & Metal Prices