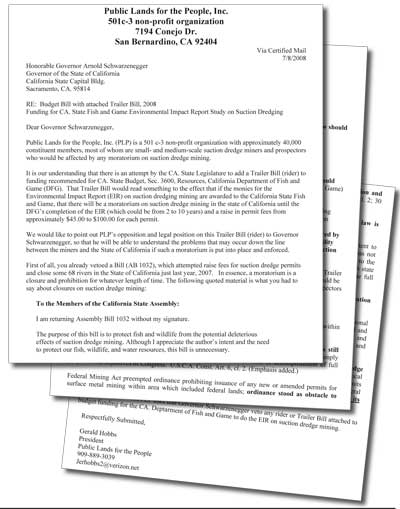 As mentioned in last month’s column, California Assemblywoman Lois Wolk attached a rider to the pending budget bill. The rider calls for a new study (Environmental Impact Report) on the effects of suction gold dredging, funding for the study, and a two-year moratorium on suction dredging while the study is being completed.

Wolk’s last attempt to put an end to suction dredging was vetoed by Governor Schwarzenegger after several thousand dredgers sent in comment letters, so she is trying another route.

Jerry Hobbs, president of Public Lands for the People, provided us a copy of the letter his organization sent to Governor Schwarzenegger to encourage another veto. Please take a moment to send your own constructive comments to the governor’s office.

Steven's Trail and the North Fork of the American

What were we doing going down a 4.5 mile trail to a cold river where there was no guarantee of anything except some ice and maybe cold hands and feet? First it seemed our winter was going to be a drought, and then all that reversed.

June 1999
• Shrimp, no shrimp of a problem for LAX...
• Southern California also has the arroyo southwestern toad...

July 2003
Several thousand miners and their families made it a successful show.  Local mining companies gave employees time off to attend the Thursday and Friday exhibits and events.

January 2000
With Congress showing little willingness to act, the Clinton administration is weighing whether to designate a dozen scenic and historic sites in the West as federal monuments to assure their protection.

Gossan is defined as being an iron-bearing capping over a sulfide deposit. It is formed by the oxidation and leaching of sulfide minerals, leaving hydrated iron oxides such as limonite and goethite, along with manganese oxides.

Subscription Required:
The Bawl Mill   • Ask The Experts—What questions should I ask before investing in a gold mine?   • Ask The Experts—Should I choose gold, silver or mining stocks?   • From the Editor   • Eight Reasons To Release Oil From The Strategic Petroleum Reserve   • No Leprechaun Needed   • Building A Mine—Dust Devil Sunstones   • Remote Throttle Benefits Dredgers   • Pickering Bar Revisited   • John Fremont and the Gold Mines of Las Mariposas   • The Pay Streak: Redefined With Metal Detectors   • No Gas Needed   • Melman on Gold & Silver   • Mining Stock Quotes and Mineral & Metal Prices

Free:
What's The Best Way To Invest In Gold Or Silver?