There have been no further developments as yet regarding the Public Lands for the People (PLP) member being assisted after he was cited by the Forest Service for occupying his claim in the Lewis & Clark National Forest without a Notice or Plan of Operation. This case has not yet gone to court.

PLP has provided the member with a summary of pertinent laws, including instruction for utilizing the 1905 Transfer Act as a defense. To their knowledge, this will be the first time the Transfer Act will be used in an attempt to invalidate Forest Service authority to regulate mining on public lands. The Act transferred authority over some regulatory items to the Forest Service, but excluded authority related to mining. The Forest Service has disregarded these exclusions and has been issuing mining regulations ever since.

Our hats off to a bunch of die-hard folks who showed up after braving the super high winds at Springfest, even though the high winds had literally flattened their tents. This time we enjoyed spectacular weather, amazing food, really nice gold, and friendly smiles all around.

It was nice to welcome back some long-time members we hadn’t seen in years, plus meet some great new folks who are just getting started. Their enthusiasm is contagious! Equally inspiring were the faithful volunteers like Judy Lepper and Rick Tucker, Cory and others who keep coming back to help set up days before the event even gets started. We can’t thank you enough! 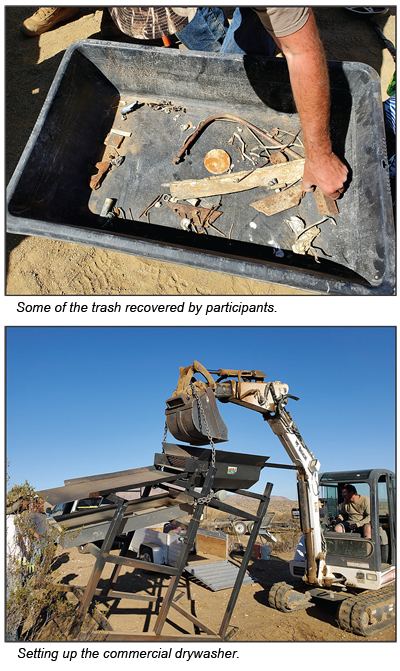 Friday night at the group campfire we gave a short reclamation dredging update from this past summer’s events and were treated to the amazing juggling talents of Brad Allen.

Saturday morning saw a bunch of us involved in a fun metal detecting hunt. A lot of trash was collected along with piles of coins, some with numbers that marked them as a prize winner. Silver rounds and gold nuggets were the top prize choices. Prizes were given for the most trash gathered up too. We always leave the claims cleaner than how we find them.

The Saturday afternoon common dig with the commercial drywasher was a big hit, and boy did they hit the gold! They also got a fair amount of tungsten for their efforts. Experienced miners and newbies learned a lot on this dig. There were panning lessons after the dig to go with the shoveling lessons. They were eager to get the gold, and got right after it!

As dinner time rolled around, Walt’s smoked brisket, pork and chicken was smelling amazing as well as all the yummy side dishes that were brought to the bountiful table by the participants. After an enthusiastic version of the Pledge of Allegiance, PLP gave an update on legal reclamation dredging in California (yes, you read that right: California). PLP sent CA Fish & Wildlife a detailed letter in the spring, laying out our reclamation dredging plans along with our contact info if they would like to discuss the issue. PLP never heard back from them.

Also, PLP performed a public reclamation dredging demonstration in Northern California early in the summer, which was well attended by our members, some driving over 500 miles to be there. They talked about the federal and California State cases that PLP helped the members win in the last few years, proving the “no addition” argument in both cases, setting the stage for reclamation dredging as we now have it.

PLP related to the guests that there were some discussions at the river this summer between dredgers and the Dept. of Fish and Wildlife. At least one was told to stop dredging or he would have to have his dredge confiscated. Our member followed the PLP dredge card to the “T”. PLP called his senior officer about the incident and the call was never returned, nor was the dredger cited. There was a Q&A time afterwards and everyone seemed pleased with the direction PLP is going with dredging.

As usual, the Saturday night raffle around the campfire was an exciting event by itself. There were many gold nuggets, silver rounds, ammo, mining gear and more. Many thanks to participants who stepped up and donated many prizes to be added to the raffle, and those who bought strings of raffle tickets.

After the Milky Way faded away, Sunday morning dawned bright and beautiful, a nice setting for the Miner’s church gathering before everyone reluctantly said their good-byes and left saying, “Until we meet again, may your detector scream, and your pans be heavy with gold.”

PLP is an all volunteer organization, so donations are always appreciated. The new 2022 PLP Fundraiser Raffle is underway. See their website for details.


Plans are also under way to coordinate with the incoming chairman of the Senate Energy and Natural Resources Committee.

Public Lands for the People has established an online petition. We would like to gather thousands of signatures from across the country to show members of Congress that their constituents are supporting this legislation.


Now they have come up with a second guide (to be released on May 1) that they believe will allow dredgers in California to resume working.


Pearson called the trip, “The most productive so far. We are courting over a dozen potential sponsors now. We had some members call us back for additional meetings and several of these lasted over an hour.”

Forty prospectors lucky enough to sign up early spent a weekend looking for gold and talking about gold. And there is nothing better than doing both.