I had the opportunity to attend the Public Lands for the People (PLP) get together near Randsburg, California in late April/early May.

Over 100 prospectors gathered for three days of detecting, drywashing and camaraderie, along with some updates on what PLP has been doing on behalf of miners.

It was a very interesting and historical piece of property of about 140 acres offered up for use by PLP board member Bill Samarin of Mad Mining. Samarin said the property had been thoroughly tested and sampled by the US Army back during WWII for scheelite, the primary ore of tungsten, but even though gold is known to be prevalent in this area, gold content was ignored because that was not the goal at the time. Large equipment was deployed to scrape the area down to bedrock. As a result, there were countless piles of material throughout the property as the Army went through much of the area and sampled for scheelite. It was ultimately determined that the amount of scheelite present was not found in high enough concentrations to continue at the price per ton at that time.

While  the Army did not test for potential gold content, that’s been the focus of Samarin’s efforts.

“There’s plenty of gold here,” said Samarin. “They just didn’t test for it. Most of it is fine gold, but there are some small nuggets.”

Samarin pointed to a large, exposed section of bedrock and stated, “You can see they (the US Army)used a really large bucket excavator. The scrapes in that rock are from the bucket’s teeth.” 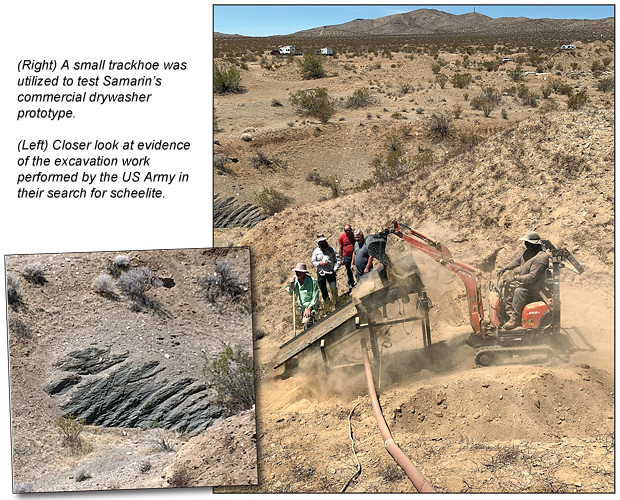 While attendees attempted to recover gold using their own drywashers and detectors, Samarin set out to testing a version of the new commercial drywashing units he has developed.

Other activities for the three-day event included a small-scale Sierra Blaster demonstration, a kids’ detecting hunt, a huge pot-luck dinner. Afterwards, PLP board members provided an update about their procedures for using suction dredges for reclamation and answered a few questions from members.

The Saturday evening event ended with a raffle. Things became a bit challenging when the hot, dry weather was interrupted by 30mph winds with occasional gusts nearing 50 mph. Everyone jumped in after the raffle to help clean up before the winds could carry everything away.


We had discovered during previous trips that some of the staff members had difficulty comprehending the specific issues related to mining, so prior to heading back to DC, we laid out the reasons for our proposed legislation...

Face-to-face meetings in Washington, DC, with Trump administration officials and members of Congress are still on hold due to the coronavirus, but Public Lands for the People is continuing to work on mining-related issues via phone and email.

November 2016
Within these districts, some of the roads and trails have been reopened for access, critical habitat designations have been scaled back, and a few Mining Districts were completely removed from proposed withdrawals.

We’ve built up some contacts in DC during our trips there over the past four years, and we believe we finally have the correct contacts who can get this petition reviewed by the proper people.

Subscription Required:
The Bawl Mill   • Ask The Experts - How do I stake this claim?   • Ask The Experts - Is this non-toxic leaching system for real?   • Ask The Experts - Where can I find more information about this claim?   • Ask The Experts - Can you tell me more about the Meadow Lake area?   • Tracing Gold To Its Source   • Tips & Tricks: How to Revive a Dredge Engine That’s Been Submerged   • Quit While You’re Goin’ Good   • The Historic Gold Rush Town of Quincy   • Gold Prospecting for Better or Worse: Add This to Your Bucket (Check) List   • Finding Gold Beyond Your Detector   • Opinion: Another Attack on Oregon’s Rural Communities   • Rand, Red Mountain, Atolia Mining Districts of Kern and San Bernardino Counties, California   • Melman on Gold & Silver   • Mining Stock Quotes and Mineral & Metal Prices