I’m back from another week in Washington, DC, on the quest to obtain regulatory relief and certainty for miners. Clark Pearson of Public Lands for the People and I were flying in from different locations, but we were both reading the same book during our inbound flights.

This book has only been in print (and available online) for a few months. The authors provide specific details on how China set out to corner the market on critical minerals and how America has failed to react to this reality despite explicit warnings.

America locked up lands, created mineral withdrawals and expanded national forests, national parks and conservation areas by presidential decree through the Antiquities Act and acts of Congress. From the late 1970s through 2016, millions of acres—including some containing known mineral deposits and others that had yet to be mapped for mineral potential—were placed off-limits.

Meanwhile, China was implementing a well-thought-out plan to create a monopoly in critical minerals mining, production and refining. Purchases of American facilities and resources by China’s government-run mining companies were allowed to proceed. In Indiana, America’s only facility capable of producing high-tech rare earth magnets was purchased by the Chinese, closed up, packed up, and moved into a new building in Tianjin, China.

The United States closed down the US Bureau of Mines in the mid-1990s under President Clinton for what was officially deemed “budgetary” reasons, though that agency had one of the smallest federal budgets and was often praised for its innovation and breakthroughs in ore processing techniques, mining safety, health, and reduction of environmental impacts.

According to “Groundbreaking!...”, America is now the only major industrialized nation without an agency specifically geared toward mining research.

As America closed the Bureau of Mines and blocked off lands to resource extraction, China was busy implementing its plan to seize control of critical minerals. It opened its first National Laboratory for Rare Earths in 1980. (Three more national laboratories would follow over the next 21 years.) China established the National Non-Ferrous Import Corporation to acquire outside critical mineral sources in 1995.

Now let’s jump to 2014. An Act of Congress was required to get a waiver so high-strength magnets could be purchased from China for use in our fighter jets. There is no other source.

In 2015, Molycorp had just finished modernizing its operations at the Mountain Pass mine in southern California, investing $1.6 billion dollars. Mountain Pass was the only operating mine producing rare earth minerals in America. China responded by flooding the market with rare earths, driving the prices of these commodities so low that Molycorp filed for bankruptcy.

In 2017, Molycorp was purchased by Las Vegas-based MP Minerals, which is 20% owned by China.

It only takes a very small amount of these minerals in most cases to give a final product superior properties like extreme heat resistance, super strength or extreme magnetism.

“For advanced weapon systems and technology products, substitution in not an option,” said Dr. Ned Mamula. “If you want to cook up a batch of Tomahawk cruise missiles, you need lots of neodymium, dysprosium and terbium. Lasers require yttrium and a rail gun needs copious quantities of holmium.”

Everything from smartphones to MRI machines to advanced radar and guidance systems require rare earths. Currently, there are no rare earth mines nor processing facilities to handle rare earth ores in the United States.

It would take me this entire issue to fully summarize all the valuable data in “Groundbreaking!...” Our policy has always been not to promote products or publish promotional material, but I’m going to violate that policy right now. If you haven’t read this book yet, you need to.

Back to the trip: Clark Pearson and I were in DC for a full week in early January 2019. We spent the first day checking in with members of the Senate Energy and Natural Resources Committee to arrange meetings for the rest of the week.

I think the most frustrating part of our efforts is that we have to start over with new staff members nearly every trip. We were only away from DC for about seven months and at least one-third of the staffers in Senate offices had moved on to other offices or committee assignments. We made some good progress in the House over the past four years, first with Congressman Cook and followed by Trent Franks (who resigned at the end of 2017 over some sexual harassment complaints).

Things started rolling much better once we met with Paul Gosar of Arizona and Jeff Small who is his Legislative Director. (Jeff is also the Western Caucus Executive Director.) They understand the issues.

Our proposed amendments went through Legislative Council on the House side on three separate occasions, and we ended up with a well-defined end-product. But Gosar lost his chairmanship of Resources when the House switched to Democratic control in January 2019, and it’s highly unlikely we can get anything through on that side now.

We also met with members of the Senate Armed Services Committee and Senate Energy and Natural Resources Committee last year. The route into the National Defense Authorization Act will be through the Senate’s version of the NDAA following the last elections, so we’ve switched our focus to the Senate.

Many of the legislative directors working for the Senators are in their early 20’s, and although they seem sharp it is very rare to find one that thoroughly understands the issues we are bringing to them. We are spending a lot of our time and effort in trying to educate them.

To follow correct procedures, we need a Senate sponsor or two on the Energy and Natural Resources Committee because that committee has to give their blessing to release our proposed amendments to the Armed Services Committee for inclusion in the NDAA.

The NDAA usually comes up for renewal around May, though it’s been approved as late as December. NDAA amendments are approved each year and apply to the following year. We went to DC much earlier this year to begin discussions with key legislators and to allow ample time for review before the NDAA is introduced in the current legislative cycle.

We had meetings with legislative council for eight Senators on the Senate Energy and Natural Resources Committee. One or two of them seemed to have a grasp of the issues and the need for regulatory reform—a few had that “deer in the headlights” look.

We also had meetings scheduled with administration at the Bureau of Land Management and Environmental Protection Agency, but those did not take place due to the government shutdown.

Clark and I were frustrated by the end of Thursday. It was very difficult to convey the urgency of regulatory certainty for mining to people who have little experience in mining-related issues. But things were looking up by the end of Friday.

I think our best meeting was on our last day and it didn’t involve a member of Congress.

We met with a member of a local think tank who has authored various articles on critical minerals. He asked if our proposed amendments would help alleviate China’s dominance and monopoly on rare earths and critical minerals.

It doesn’t matter if you are mining gold, silver, copper or scandium; every deposit or potential deposit requires reliable access, reasonable time frames for approval, regulatory certainty to obtain financing, and the list goes on. Our proposed amendments certainly apply to critical minerals too.

He suggested we change the title of our proposed amendments to call out China. By targeting critical minerals we can get the same proposed changes accomplished to help small miners but putting the focus on China will give it the urgency needed.

We headed back to our hotel room and packed up. We both had flights home scheduled for the next morning.

Clark and I kicked around alternate titles for the proposed amendments after dinner. What we settled on is:

The following Monday, I made a few slight changes to the newly-named proposed amendments and fired off emails to several people in DC who I thought could provide some constructive feedback. I wasn’t prepared for the response.

By the end of the day I was talking with some impressive civilian and military advisors, which included a retired US Army general, a retired deputy director at the US Geological Survey, and the former Armed Forces director of acquisitions for Iraq. All are enthusiastically in favor of our proposed amendments. 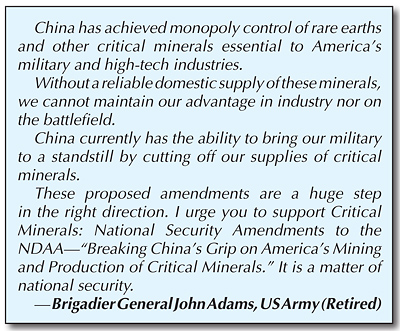 In the box to the left is the first major endorsement we received following the name change.

We now have supporters who are well known and connected in Washington, DC, and who state they will assist us in bypassing lower level staffers and getting us face-to-face meetings with Senators. They will also help us obtain additional endorsements prior to our next visit and it appears we may even have a few accompany us to the meetings to stress the importance of our proposed NDAA amendments.

Because of these rapid developments, we feel we should take advantage of the momentum we have. Clark and I will be heading back to DC to meet with civilian and military advisors, and the Senators on the relevant committees, during the first week of February.

Keep in mind that while our proposed amendments should fix access issues to lands administered by the Forest Service, force the timely approval of Notices and Plans, remove the barriers to suction dredging in California by making changes at the federal level, and more, they will not provide relief for those who have chosen to ignore current state or federal law and have been cited or arrested for failing to obtain a required Notice or Plan under current regulations. We do not advocate ignoring federal or state laws. We advocate changing the laws so miners can lawfully thrive again once our proposed amendments are approved by Congress, and we will continue until we reach this goal.

Here is the full educational packet and which includes our proposed legislation in pdf format, or if you prefer, in our 3D flip version. If you have a personal relationship with a member of the US Senate or with someone who might wish to sponsor our trips to DC, please let me know. We would love to be able to hire a lobbyist to help us finish off this process, but we will continue our own efforts until regulatory certainty for miners is achieved.

November 2011
Landowners complained that mineral mining on or near their property could damage property values while leaving them without a cut of potential profits.


Please note that new mining claims filed on or after September 1, 2019, will be subject to the new fee schedule.

Feds Order Closure of Idaho Mine

February 2012
Federal safety inspectors have ordered one of the nation’s deepest underground mines closed in northern Idaho following an investigation prompted by a series of accidents that killed two miners over the last year.

Subscription Required:
The Bawl Mill   • Ask The Experts - Do I need something other than a fire assay for PGMs?   • Ask The Experts - This low-grade ore is not worth processing   • Placer Gold Deposits of New Mexico   • The Hunch   • Resurrecting An Old Hard Rock Mine—A Series of Small Victories   • The Basics of Exploration Leases and Contracts—Part I   • Gold Prospecting for Better or Worse: A Long Hike   • Mutiny on The Mason   • Who Jumped Whose Claim First?   • The Value of Evidence   • Over The Divide: Charles "Chuck" Cushman   • Melman on Gold & Silver   • Mining Stock Quotes and Mineral & Metal Prices