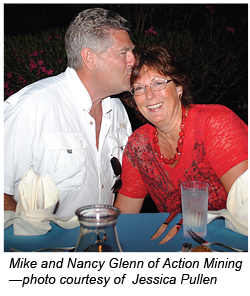 Nancy Glenn of Action Mining Services passed away on September 22, 2017 of natural causes. Nancy had been a key part of Action Mining ever since it incorporated in 1979. She worked there with her husband Mike, and their daughter Jessica who joined them in 2005. Nancy also ran Popular Mining magazine throughout the 1980s and 1990s until it’s last issue in 1996.

Action Mining is a long-time advertiser, so we here at ICMJ have had the pleasure of working with Nancy for almost three decades. We’ve always known Nancy to be very easy-going, friendly, and very sharp. We are saddened by her passing.

Nancy will be greatly missed by many, including her family, all of those at Action Mining and by all who knew and had the pleasure of working with her. She was a wonderful person, wife, mom and grandmother!

It is with a heavy heart, that Michael and Daniel Bernzweig announce that their mother, Sondra (Adelson) Bernzweig, age 80, passed away September 29, 2017.

Sondra founded Detector Electronics Corp. with her husband and partner David in 1983 in the garage of their home. Together they marketed David’s patented invention under the DepthMaster® brand name.

Her company went on to become the first online retailer of metal detectors.

Sondra was  known as one to share her knowledge with all. She touched the lives of countless individuals. She earned the respect and confidence of those around her and left the world a better place. She is greatly missed.

June 2008
“They’re taking it to the grave with them.” These words came from my Canadian mining partner when we discussed what he had learned from an elderly gentleman in a nursing home. While that particular visit was not very successful, we had a number of others that worked out far better.

Ask The Experts - Can you recommend settings for a Gold Bug 2 in Vermont?

Subtle and Not So Subtle Dangers of Hard Rock Mining

I’ve been in enough mines to know better, and I mentally kicked myself several times. That was a close call…

A week later, a small team of us hit it again, and this time the gold really showed up.

August Hearing Set for Crandon Mine

August 2000
The fight over an agreement a northern Wisconsin town passed almost four years ago that endorsed a proposed underground zinc and copper mine near Crandon goes before a Dane County judge next month.

Subscription Required:
The Bawl Mill   • Legislative and Regulatory Update   • Ask The Experts - How do I work this glacial deposit?   • Ask The Experts - How do I best recover gold in pyrite?   • It Pays to Know Your Bedrock   • BLM Cancels 10-Million-Acre Sage Grouse Mineral Withdrawal   • Take it to Bedrock   • The Beatty Mining District of Nevada   • Flood Plain Gold Deposits—What Are They Really?   • Exploring Iron Oxide Copper Gold Deposits   • Conrey Dredge No. 4   • Melman on Gold & Silver   • Mining Stock Quotes and Mineral & Metal Prices