One of the most fascinating aspects of mining during recent years has been the rejuvenation of previously abandoned mining projects. Basing their efforts on the advancing prices for many metals and the quality of current mining technology, mining enterprises have acquired and then worked to develop such properties, and one Canadian junior actively engaged in this process is Toronto-based Northern Gold Mining, Inc.

The company’s primary project is the Garrison Gold Property, located in northeastern Ontario approximately 24 miles northeast of Kirkland Lake and about 60 miles east of the mining center of Timmins. Garrison is comprised of 35 patented mining claims covering an area of approximately 925 acres; however, recent nearby additions have brought the total area under Northern’s control to over 2,470 acres.

Several mining companies are active in the area including producing mines such as St. Andrews Goldfields’ Holloway mine plus the nearby Brigus and Hislop Mine. Also of note within the region is the sizeable Osisko Gold Malartic project close to Val d’Or.

Given the long history of regional mining activities, it is not surprising that infrastructure in the vicinity of Garrison is excellent with paved road access to an 800 yard gravel road onto the project, adequate power and water supplies, while personnel and an array of mining services and equipment are available in nearby towns and cities. The area has a long, cold winter, but this fact allows for winter access to swampy or water-covered areas following hard freeze-up, and exploration and development activities can be conducted year-round.

Historic exploration work at Garrison goes back three-quarters of a century to 1935, when the Consolidated Mining and Smelting Company of Canada obtained 9 claims from a local individual and sank a 256-foot deep, deeply inclined shaft, followed by over 1,000 feet of lateral exploration work at the 120- and 240-foot levels. In addition, by the end of that year, over 10,000 feet of surface and underground drilling had been completed. Additional drilling and shaft work took place during 1936 and 1937 before further efforts were suspended. 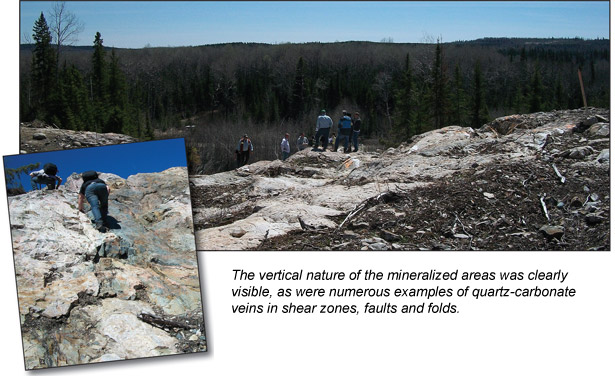 Only brief, sporadic work took place over the following 45 years until Kerr Addison Mines drilled 10 holes in 1983, and then Jonpol Explorations acquired an option to earn 49% of the 12 Kerr-Addison claims. Subsequent drilling, combined with previously completed work delineated two auriferous zones, named North and South. By mid-1987, resource estimates of that era (not compliant with present NI 43-101 standards) cited reserves of 1.5 million tons averaging 0.4 ounces per ton (opt) above the 200-foot level near the shaft.

Poor market conditions that prevailed from the late 1980s through the early part of this century caused a cessation of exploration work until ValGold Resources secured 100% ownership of the Property in June, 2005. ValGold then initiated a program of reviewing and compiling past data as part of the planning process for a new drilling program, which ensued in 2006 and 2007 when they drilled a total of 14 holes over 5,709 meters at the Garccon Zone.

Northern Gold’s involvement at Garrison began in September, 2009 when the company entered into an Option Agreement with ValGold covering the Garrison Gold Property whereby Northern Gold could earn up to an 80% undivided interest in the property over two phases. However, by April, 2011 the company announced that they had been able to consolidate a 100% ownership in the project by agreeing to pay ValGold C$650,000 in two segments and by providing ValGold with share ownership in Northern Gold amounting to 17.55% of the issued and outstanding shares of Northern’s common stock. Subsequent to that announcement, Northern has considerably expanded their regional claims by acquiring a 96.4% interest on the Linton Claim Group located adjacent to the eastern boundary of the Garrison Property and a 100% interest in the Plato Claim Group covering 915 acres located to the southeast of the Linton Group.

Both new acquisitions were acquired with a view to the geology of the Garrison Property region.

Garrison is located on the prolific Destor-Porcupine fault system located between the mining centers of Timmins, Ontario and Val d’Or, Quebec. This area has seen historic production amounting to many millions of ounces of gold and numerous projects are now in various stages of exploration, development and production. The two new acquisitions, located both north and south of Destor-Porcupine, were concluded in order to provide the company with a solid basis for expanding future exploration efforts.

The Destor-Porcupine Fault Zone is situated within the Abitibi-Greenstone Belt and is underlain by Neoarchean supracrustal rocks of the Abitibi Subprovince of the Canadian Shield and is characterized by south-side-up vertical movement. Directly to the north of Destor-Porcupine lies the Munro Fault Zone and the Garrison Property lies along and between these two zones with the Jonpol deposit associated closely with the Munro Zone and the Garccon Deposit in between the two zones.

After acquiring their initial interest at Garrison, Northern Gold initiated a diamond drill program in late 2009 covering 2,330 meters at 11 holes. This was followed by the initiation of a 30,000 meter exploration program at Garccon with 11,280 meters over 47 holes completed in 2010, and the remainder scheduled for 2011 with two drill rigs currently active.

Assay results have now been received for all 47 holes drilled during 2010 and significant mineralization has been confirmed in 45 of those including a number of holes that intersected mineralization of exceptional continuous length. Fifteen holes intersected average grades of 1.0 g/t over down-hole lengths of at least 50 meters and the best hole of the program, GAR-10-42, encountered an average grade of 1.44 g/t gold over 209 meters that included an average grade of 2.33 g/t gold over 108 meters. Eight different assay results of over one ounce per tonne gold have been recorded since the program began and recent drill results at holes GAR 11-70, GAR 11-74 and GAR 11-59 have established a 100-meter strike length of very consistent mineralization with down hole thickness of 93 to 142 meters and averaging 1.0 to 1.6 g/t gold.

Combined with mineralization found in Section 12+00W, a strike length of at least 200 meters has been confirmed.

Initial results from the 2010 drilling combined with historic data at Garrison enabled the company to issue an NI 43-101 compliant “Technical Report and Mineral Resource Estimate” for the Garccon Deposit at Garrison effective September 23, 2010. The report noted that work by the company at Garccon had confirmed the grade of mineralization outlined by previous operators and also stated, “...Northern Gold’s exploration program to December 2009 has confirmed and delineated a significant gold resource. Using a cut-off grade of 0.1 g/t gold for mineralization interpretation, Howe (author of the report) outlined a mineralized zone that is nearly vertical, 760 meters long and 300 meters wide on (average).”

During our visit during late May, 2011, the vertical nature of the mineralized areas was clearly visible, as were numerous examples of quartz-carbonate veins in shear zones, faults and folds. The report also notes that several geological styles of deposits could be distinguished including zones of stockwork veinlets, sulphide-rich veins and vein arrays, gold-rich volcanogenic massive sulphide (VMS) lenses in felsic volcanic rocks and rare carbonate-rich veins and siliceous replacements.

The company is continuing their diamond drilling as part of an overall program at Garccon that calls for infill and definition drilling through mid-2012, concurrent with advanced exploration and production permitting activities. Metallurgical testing is planned to continue through the latter part of 2011 and the company’s schedule calls for work on a Preliminary Economic Assessment to begin in mid-2011, followed by bulk sampling, feasibility and pit design, and, ultimately, mine development.

The company commissioned SGS Canada Inc. to complete metallurgical studies on “The Recovery of Gold from the Garrison Gold Deposit Located on the Garrison Gold Property” and their report was filed on January 31, 2011. Two samples, designated “A” and “B” were taken from Garccon and were assayed at 1.06 g/t Au for “A”, and 1.73 g/t Au for “B”.

The company acquired the Guanajuato Mine Complex in 2005, and since that time they have carried out extensive drilling programs, both from surface and underground, with particular emphasis being placed on the Cata Clavo Zone.

November 2011
Alaska is in the midst of assessing its rare-earth resources, an effort pushed by Governor Sean Parnell, who sees them as another example of where the US is reliant on foreign sources to meet its needs.

It’s not easy to figure out what is best without testing, and so a certain level of confusion has developed about how small the ore ought to be crushed.

A few months later, a young, greenhorn lawyer agreed to pay to have it assayed, and the quartz turned out to be rich in both gold and silver.