Legislative and Regulatory Update AB 1032—Where Do We Go From Here?

• First, The Great News...
Governor Schwarzenegger vetoed AB 1032, California’s anti-dredging bill, on October 13, 2007. The governor explained his reasons for the veto in a letter to legislators.

We want to personally thank all of our readers who took the time to send a comment letter into the governor. We also wish to thank Public Lands for the People and New 49’ers prospecting club for their tireless efforts to defeat this bill.

For those of you who missed our earlier articles regarding AB 1032, a quick summary is provided.

The Karuk tribe of California twice attempted to shut down gold dredging in several California rivers via the courts. They failed on both attempts.

In the most recent case, the Karuk’s tried to negotiate a settlement with the California Department of Fish & Game (DFG) to close several rivers to dredging and place severe restrictions on others. Miners learned of the deal and intervened. On December 20, 2 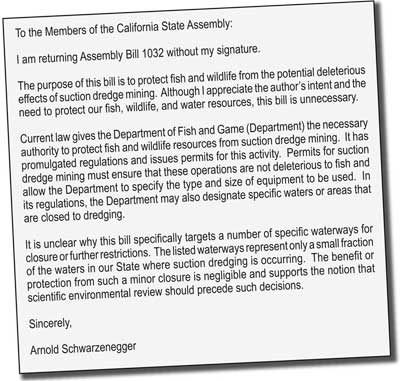 006, Judge Bonnie Sabraw ordered the DFG to complete a new Environmental Impact Report before promulgating any new restrictions on suction dredging. She gave the agency 18 months to complete the new EIR. Dredging is currently regulated under an EIR that was completed in 1994.

The Karuks subsequently authored Assembly Bill 1032 and were able to get the bill introduced by Democratic Assemblywoman Lois Wolk. In addition to numerous other restrictions, the bill would have prevented the DFG from issuing a dredge permit unless the agency could show that suction dredging was not going to be deleterious to fish. A separate department review would have been necessary for every dredging site. Dredge fees would have been increased to $100 for a resident dredge permit or $230 if an onsite evaluation were necessary; a non-resident dredge permit was increased to $230, or $300 if an onsite evaluation were necessary.

The bill quickly made its way through the Assembly. An opportunity for public comment was available in the Senate before the Senate Committee on Natural Resources and Water. The committee chair, Democratic Senator Darrell Steinberg, would only allow two citizens to speak in opposition to the bill and he reduced their speaking time to two minutes. It became obvious he had already made up his mind to pass the bill on to the full Senate for a vote.

The bill moved to the Senate and passed with a majority vote, mostly along party lines.

Attorneys representing Public Lands for the People and New 49’ers met with Governor Schwarzenegger’s attorneys on several occasions. We here at the Journal sent out notices to over 3,000 subscribers and advertisers, requesting that letters be sent to Governor Schwarzenegger to encourage him to veto the bill.


• What's Next?
Judge Bonnie Sabraw ordered the DFG to complete a new Environmental Impact Report within 18 months of her decision. The decision was signed December 20, 2006, so DFG has until June 20, 2008, to complete the EIR.

We haven’t seen anything to support that DFG has begun the process of completing the EIR. In the meantime, the Karuks have filed another lawsuit against DFG because no funds have been allocated by the state for completion of the EIR, and with only eight months left until it’s due to be completed, it appears DFG will not meet Judge Sabraw’s deadline.

Public Lands for the People is participating in this new lawsuit, which was again filed in Judge Sabraw’s court for purposes of continuity. The first hearing was scheduled for the end of October. We will let you know what happened next month.

We need to continue to support volunteer organizations like Public Lands for the People. They have taken an active role in fighting unreasonable regulations. Jerry Hobbs, president of PLP, stated the organization will participate in the EIR and any subsequent lawsuits to ensure regulations are based on sound science.

Current dredging regulations are still in effect. These regulations prevent dredging from occurring during spawning seasons and include other restrictions to minimize possible harm to California waterways and the various species they support.

And we need to continue to educate the public. The goal of these tribes and environmental organizations appears to revolve around seizing control and making money. If they were serious about improving waterways they would be encouraging gold dredging when fish are not spawning. Yes, you read that right. Much of what a dredger does is actually beneficial to fish and their habitat, but the public is oblivious to this when they only hear the well-orchestrated campaigns from tribes and environmental groups. A dredge can break up compacted gravels and create small pools, providing better spawning areas for fish and cooler waters. And dredges provide the only economical method of removing mercury and other contaminants from waterways.

See page 21 if you wish to lend your support to Public Lands for the People.

Family Sues US Mint for Return of Rare Gold Coins

January 2007
In a federal lawsuit, a family claims the US Mint illegally seized 10 gold coins that the family had found among a dead relative’s possessions.

Quartz and Chalcedony in Wyoming

June 1999
Quartz is a common rock-forming mineral found in many shapes, forms, and colors.

Walking around the gulch and exploring the upper drainage, picking up different rocks and inspecting them with a good loop, and looking them up in a field guide of rocks and minerals of your region will help you understand how the gold got there.

...I got the faintest of rises in the threshold. It was hardly a signal at all, and I thought it was one of the many, deep, hot rocks in the area.

August 1999
In twin blows to environmentalists, a Senate panel decided June 22nd to cut a high-profile proposal by President Clinton for buying park land and to limit an effort to restrict waste dumping at some hard-rock mines.

Gold in the First Pan

September 2002
Leon has a reputation of seeing more snakes than most other gold miners. The fire red and yellow concentric rings of the mountain king snake looked especially bright in the morning sun as it lay motionless on black rock. Leon touched it with a stick, but the cold snake moved only a little.