Few countries on this Earth would appear to present as intimidating an array of negative factors for mining as the South American nation of Guyana. The majority of the nation is covered by immense and sometimes impenetrable jungle; the country’s infrastructure outside of the capital city of Georgetown is almost non-existent; precautions must be taken against malaria and yellow fever among other potential diseases; and the threat of encounters with wild and sometimes dangerous “critters” is very real. Yet, despite these obstacles, Guyana is becoming a hot-bed of mining activity for several junior mining enterprises, specifically including Vancouver-based GMV Minerals Inc.

Despite these noted difficulties—also including a hot and humid climate—Guyana is not without its virtues for Canadian junior miners. Thanks to its former British colonial status, the country is English speaking; it has a legally established mining code; gold exploration and production has been ongoing for well over one century; and, as we were advised by Prime Minister Samuel Hinds, the government of Guyana recognizes the contributions mining is able to make to the country’s economy and his government fully encourages foreign mining investments inside Guyana.

GMV hosted a group of writers, analysts and geologists in late June 2011 to visit their mining camp located in a jungle area about 70 miles from Georgetown; meet with company geologists and executives at their headquarters in Georgetown and the company also arranged a one-hour visit with Prime Minister Hinds.

The reason for a steadily growing mining interest in Guyana lies in the geologic structure of the northern portion of the South American continent, stretching from Colombia through Venezuela, then into Guyana, Suriname, French Guyana, Brazil and, geologists opine, next across the Atlantic to the prolific copper and gold mining districts of central Africa, which appear to host a similar geologic environment to that of northern South America. Several geologists share the opinion that the area of northern Guyana offers the prospect of discovering “elephant”—or unusually large—metals ore deposits.

Guyanese gold deposits occur in deformed and metamorphosed greenstones made up of alternating mafic to felsic volcanic and sedimentary rocks intruded by granitoid basoliths and stocks. Several specific areas of gold mineralization in Guyana include Omai, Million 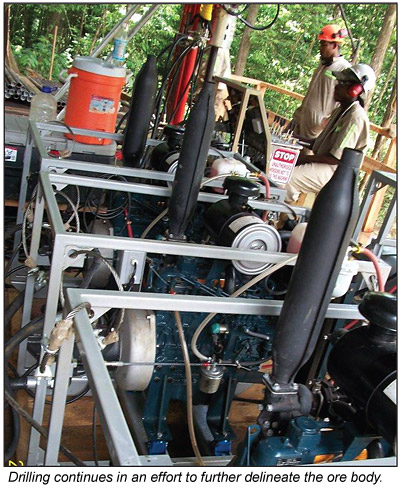 Mountain, Tassawini and Aurora, as well as the newly discovered copper-gold Toroparu deposit. In addition, alluvial mining in the region has been active for decades and company geologists believe the existence of alluvial gold has been a good indicator of in-situ hard rock deposits.

In May of 2011, the company was able to announce that it had entered into a binding letter agreement with Mr. Alfro Alphonso to acquire a 100% interest in the initial 454 medium and 2 large-scale claims.

The company’s most important early exploration development project was a fixed-wing airborne magnetic gamma-ray spectrometry survey conducted over a wide range of their holding areas. By late spring 2011, the survey was completed and had covered a total of about 20,000 miles, making it the largest non-government airborne survey ever conducted in Guyana. GMV has retained the services of Christopher (Kit) Campbell, P. Geol. to provide his interpretation of this mountain of data in order to discover anomalies suitable for further exploration. In addition, geochemical samples taken at ground geophysical survey sites have been sent in for assay.

There are now two drill rigs operating near GMV’s base camp area, both owned by the company. The drill rigs had to be transported into the area by truck and barge and were assembled on site. Their initial drill program consists of 25 vertical holes drilled to a depth of about 200-300 meters, and the first holes have been centered on the strongest anomalous showings from airborne and ground geophysical surveys. The drill core is being logged on-site and then cut at the company’s own cutting facility at the base camp. From there the core will be shipped to the Acme assay prep labs in Georgetown before forwarding to Acme’s laboratories. Assay results are anticipated to begin arriving by mid-summer 2011.

GMV’s camp is located about 70 miles from Georgetown and has literally been carved out of a jungle area. At present, there are only two means of transport into the camp; a 40-minute helicopter flight from Georgetown or a lengthy truck trip involving barge transport as well as travel over somewhat primitive roads. The company hopes to benefit from other area corporations’ plans to build new roads into the region and Prime Minister Hinds also indicated that one of Guyana’s highest priorities is to improve the country’s transportation infrastructure.

The helicopter flight into the camp was quite remarkable, crossing two mammoth rivers plus virtually endless jungle that lay below us with only sporadic indications of any human activities. The jungle canopy appeared to be about 120-150 feet above the surface and is virtually impenetrable by light as we could not see through to the ground with any frequency. We were told that numerous monkeys live in the canopy, along with several unusual species of birds.

Our visit with Guyana’s Prime Minister was most enlightening, particularly in relation to mining. PM Hinds reviewed the history of mining in his country, going back to some early participants such as B.G. Consolidated, Golden Star, Cambior, Anaconda and later entrants such as GMV Minerals, Sandspring, IAMGOLD and Guyana Goldfields. He noted that while gold was of particular interest, Guyana also has a history of resource extraction for copper, bauxite and petroleum. One problem he identified was that Guyana had a small population of only 780,000 and was relatively poor. Therefore, in order to finance clearly-needed improvements in the country’s infrastructure, he was looking to mining operations to take up some of that burden as part of developing their own projects. He also looked for the mining industry to aid the company’s education systems by providing job training programs. VP Perkins had earlier informed the tour group about GVM’s extensive training programs, which had taught many of the native workers skills that they could not have otherwise acquired.

At his close, Hinds emphasized that Guyana was open to investment by anyone, and particularly noted that the Chinese were searching for sources of many needed items, including metals and lumber, and Guyana could become an important source for those commodities. Because of the size of its holdings, GMV has been looking for Joint Venture partners to develop specific project areas and they just announced an option and joint venture agreement with Canamex Resources whereby Canamex has committed itself to specific actions to develop a 98,000 acre area known as “Ankara North.” There is currently active alluvial mining ongoing within the area of Ankara North, and management believes the source of the alluvial gold is in the outcropping and shallow bedrock at the headwaters of the gold-bearing alluvial drainages. Canamex intends to begin field programs at Ankara North as the fall dry season approaches, beginning in August 2011.

In our conversations with GMV President and CEO Ian Klassen, he indicated that the company remains open to establishing additional option or joint venture agreements with other mining companies in order to fully develop their substantial holdings.

It was your correspondent’s privilege to accompany Great Atlantic’s management and geologic team on a journalist and analyst tour of their various New Brunswick projects during late June, 2012.


The proposed mine would be built on state-owned land in the Bristol Bay region, near the world’s largest wild sockeye salmon fishery.

Mineral Exploration On The Rise

…2017 was just the first year with a small increase after a huge drop off in exploration activity. It may take many years of future increases to get back to where the activity was in 2012, as projected increases in exploration spending are seen to be slow and steady.

It is the second largest gem-quality diamond in history, after the 3,106-carat “Cullinan Diamond” was recovered in South Africa in 1905.

We sent them a lot of information, including my presentation about the area and its potential. We were excited to learn a couple weeks later that the company was interested in the property.