Mexico has a lengthy history of mining and one of the regions most associated with that activity is Durango State in the north-central part of the country. ECU Silver Mining Inc., a Canadian junior with head offices in Rouyn-Noranda, Quebec; executive offices in Toronto; and Mexican operations offices in the city of Torreon, is active in northeast Durango State, both in terms of ongoing production as well as exploration and development at their Velardena property near the town of that name. We were fortunate to visit Velardena early in May and were hosted by ECU’s CEO, Michel Roy.

ECU’s property is comprised of three separate projects. “Velardena” and “Chicago” are both 100% owned by the company through its wholly-owned Mexican subsidiary, Minera William SA de CV, while “San Diego” is currently joint-ventured with Golden Tag, which has earned a 50% interest. The Velardena property itself is comprised of four interconnected mines; Santa Juana, San Juanes, San Mateo and Terneras. 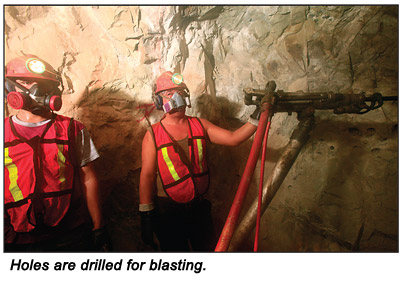 In terms of regional geology, the Velardena District is located on the eastern flank of the Sierra Madre Occidental mineral belt with the regional geology being characterized by a thick sequence of limestones and minor calcareous classic sediments of the Cretaceous Age. Several important mines are located in the general vicinity of Velardena, including Gold Corp’s Penasquito Mine and the world’s richest silver mine, Penole’s Fresnillo Mine. Penoles also operates Mexico’s richest gold mine, La Cienega, located to the west of Velardena.

Infrastructure near Velardena, located about 60 miles southwest of Torreon and 85 miles northeast of Durango City, is superior to what one might normally expect of rural north-central Mexico. An excellent four-lane highway connecting Durango City to Torreon passes just by the property area and adequate electric power via the national grid is available. Manpower is supplied by the town of Velardena as well as other area communities and a variety of supplies can be obtained from Torreon and Durango City.

Despite the semi-arid climate with annual rainfall of slightly less than 10 inches, water is available from three company-owned wells near Velardena and these wells have sufficient capacity to cover actual and planned expansion needs. In addition, water has been found at the bottom of some old mine shafts; aquifers have been discovered on their properties and, if needed, water could also be trucked from the regional Francisco Zarco dam.

History has played a very important role at the Velardena property as previous mining work has left a legacy of underground developments that are an essential consideration in ECU’s present production and exploration programs. While some sporadic records show the existence of mining in the district dating back to the early 1800s, it was American Smelting and Refining Company’s (ASARCO) serious efforts beginning in 1902 that initiated substantial developments at Velardena, including mining of both the Terneras and Santa Juana veins. ASARCO also installed a 2,500 tonne per day (tpd) smelter.

ASARCO and other independent contractors worked the mines for about one-quarter century, but low prices, declining grades, political difficulties and metallurgical problems with sulphide ores resulted in closure of the mines in 1926. Following the ASARCO decision, development was limited to small-scale work by local miners until 1994, when William Resources acquired the concessions via their Mexican affiliate, BLM Minera. Following completion of a feasibility study, they completed pre-production development and mine construction. This included expanding an adit through the Terneras vein, which also provided access to the Santa Juana vein. A winze at the Santa Juana Mine was deepened and a ramp was driven, allowing access to lower levels.

ECU Gold, predecessor company to ECU Silver Mining, acquired 93.48% of BLM Minera along with 100% of Minera William in 1997, and began geologic mapping and sampling programs. The adits, ramps and winzes also allowed for underground drilling programs at both Santa Juana and San Juanes Veins prior to 2005 involving 24 holes over 2,542 meters, and this was followed by a 2006 drill program, also underground, of 13 holes over 2,910 meters, with the latter program confirming the continuity of the veins. 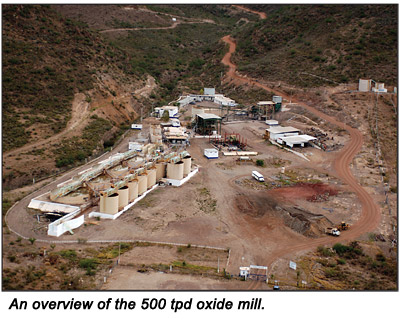 In addition, the report showed sulphides mineralization in the Inferred category amounting to 26,141,000 tonnes grading 2.07 gpt gold and 158.4 gpt silver, amounting to 244,228,000 ozs. silver equivalent. They also observed that, “...The stated resources are not materially affected by any known environmental, permitting, legal, title, taxation, socio-economic, marketing, political or other relevant issues...”

In a separate statement, MICON also noted that their estimates of the Mineral Potential for ECU’s Velardena properties were in a range of 41.7 to 87.2 million tonnes grading in a range of 2.08 to 2.82 gpt gold and 167 to 207 gpt silver, totaling 569.5 to 930 million ounces of silver equivalent. This mineral potential estimate was founded on reliable evidence that many of the veins and vein packages at Velardena have lateral continuity in both directions and at depth. MICON emphasized that these figures are only projec-tions of potential and do not reflect actual resources.

Given that most of the high-grade veins at Velardena trend toward the vertical, ECU is primarily using the shrinkage stope mining method, involving mining upward from a lower to an elevated horizon, leaving broken rock in the excavation thus created. Ore is then transported via underground rail transport to a surface crusher, then to transport trucks and on to the company mill. 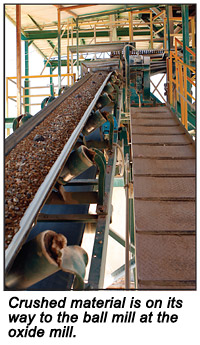 The company operates two mills—a cyanide leach mill and a flotation mill—and both are fully operational. The cyanide leach mill, located 1.2 miles from the Santa Juana mine site, processes oxide mineralized material via a Merrill Crowe precipitation circuit. After crushing to sand or even smaller-sized grains, ore is mixed with a cyanide solution that dissolves the gold, with the resultant pregnant solution later processed to recover the gold into doré bars that are sold to a third-party refinery. Present capacity of the cyanide mill is 500 tpd.

The flotation mill is located adjacent to the town of Velardena and is utilized to process sulphide ore via a lead/silver and zinc flotation circuit plus a pyrite/gold circuit to recover more gold and silver. Recovered lead/zinc concentrates are sold to interested smelters in Mexico or elsewhere and the pyrite-arsenopyrite-gold concentrate can be sold as is or roasted and then processed in the cyanide mill as iron-gold concentrate. The current capacity of the flotation mill is 320 tpd.

In addition to the two production mills, the company also has acquired a second flotation mill (not operational at present) with a capacity of 80 tpd and suitable for large-scale metallurgical testing or special processing of ores different from the main feed. ECU also has its own laboratory on site.

During our discussions, Roy mentioned the company planned to build a new flotation mill with a capacity of approximately 1,500 tpd, in line with the goal of increasing revenue in order to finance further exploration and development from operating revenues rather than taking on debt or additional equity financings. ECU recently reported that revenues for the month of April reached a new high of $2,000,000.

The company’s operations are very important to the area economy as more than 400 people are currently employed in exploration, production and milling operations. Wages earned from these activities are above average for the region and, as a result, ECU has found a high level of cooperation from neighboring communities and state governments.

Given the wide international publicity that has accompanied Mexico’s drug wars, safety and security have become important issues and the company has staffed guardhouses at the entrance to the production areas as well as at both milling operations. Roy mentioned that while there is concern over reports of violence, mining and milling operations have not been adversely impacted.

Further information is available on the Internet at www.ecu.ca

The Highs and Hazards of Desert Prospecting

We hit on a good spot the last time we were at this location and we made up our minds that we weren’t going to let hurricane-like winds stop us.

At one time or another, many miners will look seriously at purchasing a mining claim...Usually it’s a significant financial commitment, so how do you know if you are getting a good deal?

September 2001
Gold—a very elusive, heavy, yellow, metallic element—is coveted by man and not easily given up by Mother Nature. This is a story of a group of friends—old, new, and some I hadn’t met before this trip. We embarked on a journey in search of that yellow metal.

Recent sharp price increases for copper, nickel and platinum group metals (PGMs) have greatly stimulated exploration for these metals, and individual prospectors have made important discoveries of new deposits.

Lots of prospectors are trying out nugget detecting for the first time and finding out that it isn’t all that easy. In fact, in my opinion, metal detecting for nuggets is perhaps the most difficult form of prospecting that one can take on.

Subscription Required:
The Bawl Mill   • Legislative and Regulatory Update   • Sluicing at Rocky Bar, Idaho   • Nine Pound Nugget Found In Northern California!   • How Much Gold Is In My Gold-Quartz Specimen?   • Glaciers and Placer Gold Deposits   • Ask The Experts: Can you help me identify these items?   • Getting The Most Value From Your Gold-Quartz Specimens   • Highbanking and the House Rock   • Fix or Replace, Depreciate or Write-Off   • Melman on Gold & Silver   • Mining Stock Quotes & Mineral and Metal Prices