At a time when many junior mining companies are struggling because of the difficulties of obtaining finances, Allied Nevada is moving forward and has restarted production at the Hycroft Mine.

Successful gold production began at Hycroft in the last quarter of 2008, and Allied Nevada is currently ramping up for increased production of both gold and silver. The company expects to increase production until they reach a rate of 100,000 ounces per year, a goal they are expecting to accomplish by the end of 2009.

Silver production is roughly 3 ounces for each ounce of gold.

Moving from exploration to production is no small feat for most small mining companies, and this is especially true during a time of recession when venture funding is a scarce commodity.

Allied has made some new discoveries in extending the known mineralized fault zones and located some previously unknown ore zones. This includes the new ore deposits that have been designated as the Fire fault zone. (“Fire” was chosen as the name as it is located alongside the previously mined Brimstone deposit.)

Including both historic and recent exploration, 3,626 holes have been drilled on the property. While all of the holes have been assayed for gold, less than 650 holes were assayed for both silver and gold. During the earlier mining periods, less emphasis was placed on silver because of its lower price. 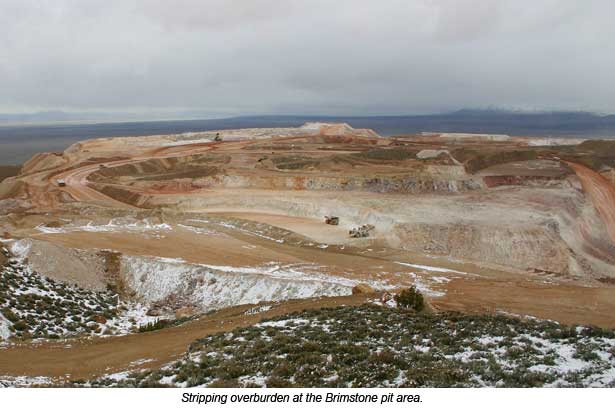 Allied Nevada is actually a fairly young company. It was formed in September of 2006 from the combination of Vista Mining’s properties in Nevada and those of Carl Pescio. Both owned a considerable number of properties and a partial interest in a number of others. Most of the shares of Allied Nevada acquired by Vista were transferred to their shareholders on formation of the company.

Because of the way it was put together, the company received ownership of a large number of promising properties known to contain significant ore reserves, making it a very significant player in Nevada precious metals mining. Their holdings include full ownership of the Hycroft, Wildcat, Maverick Springs, Mountain View, Hasbrouck, Three Hills, and Contact projects, and many more Nevada properties that were acquired by Vista through the F.W. Lewis, Inc. assets.

Allied Nevada also holds the property interests previously held by the Pescios, including royalty and/or other interests in Beowawe, Cobb Creek, Dixie Flats, Dome, Wild Horse, Eden, Elder Creek, NAD, North Carlin, North Mill Creek, Pony Creek and Eliot Dome, Switch, Six Mile, Toy, Tusk, Rock Creek, Santa Renia, South Silver Cloud, Tonka and Woodruff properties. The company receives royalty payments on some of these properties. With such a large property stake, Allied Nevada has considerable potential for future exploration and production, as these properties are located in some of the most prolific gold-producing trends in the state. For now, however, their principal focus is on the Hycroft Mine.

The mine is located in the Sulfur Mining district 54 miles west of Winnemucca in Humboldt County, Nevada. The ore deposits here lie in the hanging wall of a series of steep parallel fault zones, which are associated with an old hot spring. Geologically speaking, the deposit is quite young. Both silver and gold were deposited in a near surface environment. Gold is present as fine-grained free gold, but silver has been deposited as ruby silver (proustite and pyrargyrite). Most of the ore is hosted by a volcanic formation that has been highly altered by acidic waters. Some of this material has been altered to what is essentially a fine-grained silica (quartz) material left by the removal of other oxides from the rock. Some ore is also hosted in a conglomerate that overlies the volcanic rocks. Near the surface, the ores are well oxidized, but down deep the ores are of a sulfide nature that is more difficult and expensive to process.

While they have discovered some new ores, the Hycroft reactivation operation is focused for now on extracting the oxide resources remaining in the previously mined Brimstone deposit. The property is located in a 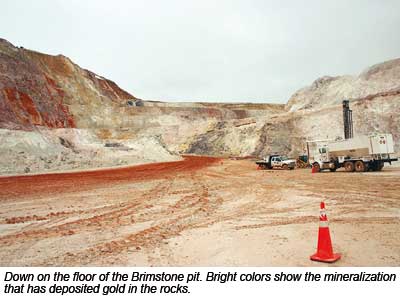 well-known gold-bearing region, which includes the placer gold deposits at Rabbit Hole and Sawtooth, as well as the Rosebud district. Rosebud was the site of an underground gold and silver mine in the 1990s, and is also only a few miles away.

The Hycroft property has been mined in one form or another for many years. Sulfur deposits were discovered here by the local Indians who showed the deposits to white settlers in the 1870s. The sulfur deposits are distributed over an area several miles long and about one mile wide. The sulfur occurs as crystal masses on walls of cavities and in disseminated form in highly altered siliceous rocks consisting of quartz and chalcedony. The sulfur-bearing material was mined by surface pits, and the material from these shallow deposits yielded 15-85% sulfur. A considerable amount of alunite, some gypsum and a small amount of cinnabar was associated with the sulfur. Various processes were used by the different companies that operated the mine to extract the sulfur, and a flotation system was installed in the 1920s. Some alunite was also mined from these deposits in the early days for use as a fertilizer.

Because the gold here is not coarse enough to be recovered in a pan, the deposit was not recognized as 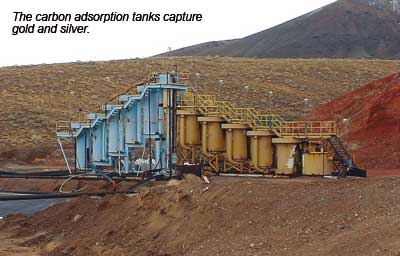 holding any significant potential for precious metals until 1908, when rich silver ore was discovered by a man named Moonsey at the south end of the sulfur deposits. Silver was mined for a number of years principally by leasers who are reported to have produced ore shipments with a value exceeding $100,000. This early development consisted of a number of trenches and shallow shafts totaling about 1,500 feet in length. The deepest shaft was 95 feet, and all mining was done by hand methods. The silver occurred as cerargyrite (horn silver) in narrow seams varying from a fraction of an inch up to 4 inches in width. No ore was found at a depth greater than 20 feet from the surface. The narrow seams of horn silver were found in a cemented conglomerate. This is the same conglomerate that overlies the gold ore bodies.

After the small horn silver deposits were exhausted, little in the way of precious metals exploration was done for many years. The property sat idle until low grade gold values were discovered in the late 1980s by surface sampling. Drilling demonstrated the existence of several large ore bodies, mostly of lower grade material, but some higher grades were also found. Many of the ore bodies were located at or near the surface so that the resulting stripping ratio for surface mining operations would be low. Heap leach mining was initiated on the property not long afterward. Although mining here was initially begun under multiple operators, the property was consolidated under Vista Mining, and Hycroft was their flagship property for many years, producing more than one million ounces of gold from 1987 through 1998. The mine consists of a combination of patented and unpatented mining property, and covers a very large area—25,320 acres.

Vista Mining was able to identify large amounts of low grade oxide ore on the property, but because of the low prices for gold prevailing in the late 1990s, Vista was forced to shut the mine down in 1998. Allied Nevada has been the beneficiary of a significant increase in the price of gold since that time, as gold has moved from around $300 per oz. when Vista closed its operations to its present price range fluctuating between $850 and $950 per ounce. Lower grade ores that were marginally unprofitable to work in the late 1990s are now well worth mining.

The Hycroft Mine operation employs standard surface mining procedures, drilling and blasting 25-foot lifts in their open pit. Ammonium Nitrate Fuel Oil mixtures (ANFO) are used for blasting. The ore is processed in a run of mine condition, using heap leaching methods to extract the gold and silver with cyanide. The existing heap leach pads have been expanded and will continue to grow with Allied Nevada’s mining operations.

Considerable lime is added to the ore because of its acidic nature. Both activated carbon and Merrill Crowe extraction methods are used to remove the gold and silver from pregnant solutions that collect in the ponds. 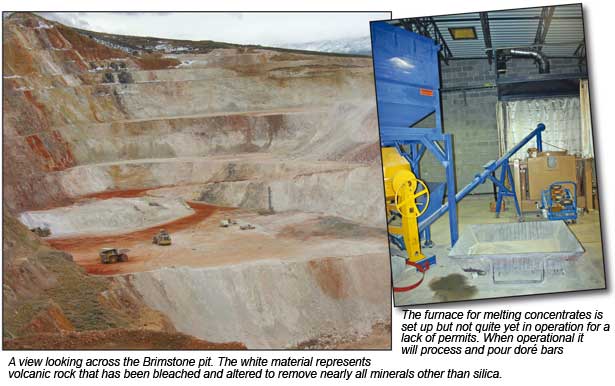 The precious metals produced are shipped to the refiner as a fine-grained concentrated product (powder). Doré bars are not poured because the company is still working on obtaining air permits for that phase of their operation. (The product needs to be retorted to remove mercury prior to melting.) These permits are expected to be received in the not-too-distant future.

Exploration continues, and the ore mineralization is still open along both the trend strike and at depth. Allied Nevada’s initial exploration drill program, designed to expand the oxide and sulfide resource at Hycroft, has been successfully completed. Additional drilling is planned for the third and fourth quarters of 2009 to further expand and define the mine’s resources. Some potential exists on the property for the discovery of deeper, higher grade materials. Some hot spring type deposits are known to grade at depth into bonanza-type epithermal systems, and it is not known if this might be the case at Hycroft. While it is unknown exactly what the potential might be at this deposit, it is conceivable that further deep exploration could reveal bonanza-type epithermal mineralization underneath the existing open pits.

Allied Nevada is currently producing gold for about $500 per ounce at the Hycroft property. Although this is a little bit on the higher end of the range for most of the larger gold producers, it is likely the overall unit cost to process each ton of ore will be reduced as production increases, resulting in a lower cost per ounce of gold produced. A production price of about $500 per ounce leaves a safety cushion with plenty of room for their operations to remain profitable in spite of the normal fluctuations in the price of gold.

In a time when many of the smaller mining companies and exploration outfits are struggling, Allied Nevada is thriving, expanding and growing. Strong funding for the operations at the Hycroft Mine allowed them to bring the property back into production and to continue the ramping up to meet their production goals.

More information about their operations can be found at the company website: www.alliednevada.com

Cusac Gold Mines is a Canadian junior mining corporation conducting their operations and explorations in one of the most remote areas in the North American continent, near the one-time town of Cassiar.

November 2005
“Bloody Nick,” as he was known, arrived in California in 1850. From his name, there were those who thought him to be a big man, but instead, he was a small thin man, fifty-six years of age.

April 2017
We spent our evening at some informal get-togethers at two private residences in the DC area, which provided the opportunity to talk with staff members from Congress, other agencies, and a few consultants working on public land issues. We found common ground with many of them, and found a strong ally in a former Congressman turned consultant who agreed that Mining Districts provide the smartest legal route...


I have a slight mental disorder. It causes frequent lapses in common sense, good judgment and bouts of high fever—gold fever.

September 2015
Eleven treasure-laden ships that made up the 1715 Fleet were heading to Spain from Havana on July 31, 1715, when they encountered a hurricane off Florida’s central coast.

Gold Prospecting for Better or Worse: Respect the Angle of Repose

If you have done any hiking in rough terrain you are well aware that going down a slope is much more difficult and dangerous than climbing it.