The Very First Issue of the Mining Journal

Last year we ran a contest to find out who had the oldest copy of the Mining Journal.

Carol Marshall of Grass Valley, California, was one of hundreds of readers who entered the contest, though her oldest issue (August 1962) was not one of the three finalists.

Tim Callaway of French Gulch, California, possessed the oldest surviving issue—September 1931. This was the original issue—or so we thought. Upon further examination we found that it was designated as Volume 1, Number 2. We realized that sometime during the first year or two of publication, a month was skipped over.

Carol, who belongs to the Sierra Nevada Mining and Industry Council, said her group got together and brought their oldest issues to share. When the contest was over, she went back to business as usual, which includes serving as a volunteer at the North Star Mining Museum in Grass Valley. 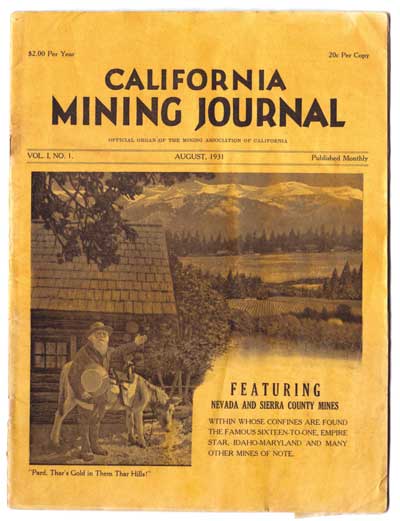 The North Star Mining Museum is housed in the old power house of the North Star Mine. It has an extensive collection of mining artifacts from Nevada County, California, and historically accurate exhibits have been created to display them. There are all types of artifacts on display,  including a thirty-foot diameter Pelton wheel that was used to power the air supply to miners in the North Star Mine.

The museum also has an extensive collection of maps, documents, reports and journals.

While working at the museum in July 2009, Carol was searching through some filing drawers. In one of the drawers she found an old copy of the California Mining Journal. She looked at the date on it and was shocked at what she saw.

“It said Volume 1, Number 1, August 1931. I couldn’t believe it! I almost fell down!” said Carol. She had found the very first copy of the Mining Journal, in fairly good condition and with all the pages intact!

Carol contacted us following her discovery. Needless to say, we were very excited, too!

We asked if we could have the original issue, but made it clear that we could be happy with a scanned copy if they decided they could not part with it.

At the museum’s next administration meeting, they decided the original copy should be returned to its publisher, and it arrived a short time later.

The August 1931 issue is 32 pages and focuses on Sierra County and Nevada County, California. Governor James Rolph, Jr. provides the welcoming message and pledges his support for mining in California.

“Our wealth in structural and other industrial mineral raw material is wide-spread throughout California and in great variety, and if properly fostered and adequately supported by governmental promotion, will continue to grow in importance and will continue to support an ever increasing industrial population in this State,” said Gov. Rolph.

“His dream of a mining magazine for California we are humbly attempting to fulfill,” wrote Arthur’s wife, Elsie Willoughby, who was the first editor and publisher.

We decided to share the entire original issue with our readers before preserving it. We have carefully scanned the pages and created an Adobe .pdf file, which will be available shortly on our website.

We would like to extend our sincere thanks to Carol Marshall and the North Star Mining Museum, and encourage you to visit them when you are in the area. The museum is located at the south end of Mill Street (the corner of Mill Street, McCourtney & Allison Ranch roads), Grass Valley, California. It’s open 10am to 5pm daily, May 1 - October 15. More information is available by phone at (530)273-4255 or via email at info@nevadacountyhistory.org

There is a major change coming in the economy of the world and now is the time for prospectors and miners to grab a ticket and get on board.

February 2007
Environmentalists are attempting to turn the jewelry industry against Alaska’s Pebble Mine before the project even gets fully under way.

Following Clues to an Old Mill and Vein Strike

August 2012
My last update on this adventure was in the April 2012 issue and involved our search for the northern extension of the Cedarberg Mine. At that time we had found it and we were in the process of returning for some detecting when Mother Nature struck with a late rain and snow storm.

Ask the Experts - Old workings & tailings: What are my options?

February 2012
Q: ...It’s a 2,000-acre property that was mined 100 years ago, still has the old workings, tailings, etc. I am looking to recover gold from the old waste/tailings... plus possibly strip mine some of it. What are my options?

January 2016
What are these rocks?

Ask The Experts - What do you think is the source of gold in this area of Ireland?