Steven's Trail and the North Fork of the American

What were we doing going down a 4.5 mile trail to a cold river where there was no guarantee of anything except some ice and maybe cold hands and feet? First it seemed our winter was going to be a drought, and then all that reversed. Rain and snow pounded the area, and gold fever set in like a bad case of pneumonia. We had three feet of snow first, then melting, then pouring rain and more snow. A miner can take only so much, and these storms have led to some drastic thinking!

The high country of the Sierra Nevada was inaccessible due to deep snow, and much of the lower country is either private, under claim, or has been worked and re-worked. Mining claims are everywhere now—the price of gold helping make that happen. Many of the rivers are withdrawn from mining location and motorized equipment use. That’s a disadvantage, and yet it can be a short-term advantage to a pinned up miner.

The North Fork of the American, above the Mineral Bar Campground and below Colfax, is a good example. This section of the river was placed in the Wild River classification system from basically the Iowa Hill Bridge upstream. Here there are miles of river available for gold panning and sluicing. This is very rough country though, with difficult access, especially in the winter when the water is high. There is no wading and cutting across the river at this time of year. It’s way too deep and swift, not to mention the cold snow melt and overnight freezing temperatures.

The question is—where on the river do we go to find gold and how do we get there?

The North Fork of the American was very rich in its day, and still has some heavier specimens. Last year I panned out a 2.5 pennyweight piece in an area only accessible in the summer after the high waters subsided.

Mining history becomes very important. Knowing the location of old mines and hydraulic pits can be crucial to success. Drainage systems are also good studies, and the North Fork of the American has all of the above.

Geologic history provides some real keys for North Fork gold. Prior to the formation of the North Fork canyon, before it cut its way down 1,000 feet, there were large ancestral rivers running on the surface. A major flow of the ancestral Yuba system ran from the mining town of Yankee Jims on to Iowa Hill and then northwest 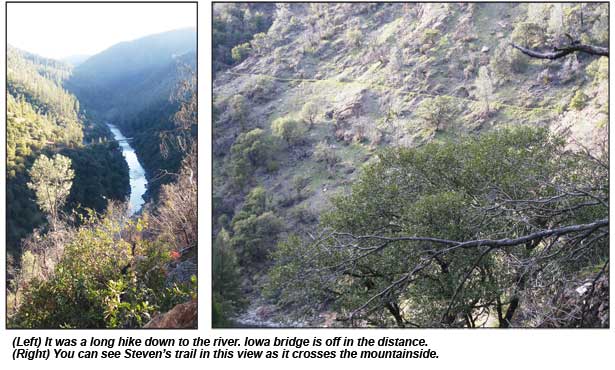 towards Colfax and Dutch Flat. An additional Eocene system ran from Stewarts Diggings in Dutch flat to the Mountain Gate and Hidden Treasure mines of the Foresthill Divide. There are also intervolcanic channels like the Red Point, and areas enriched by erosion from the Melones Fault system bearing numerous, rich, hardrock veins. All of these areas were cut and eroded by the North Fork of the American River. You can understand why the old timers were mining the North Fork for its gold!

The mining town of Iowa Hill was hydraulicked heavily and later drifted. The erosion from all this hydraulic work went right down into the North Fork. On the hillside below Iowa Hill, on its way into the North Fork, a piece of gold and quartz weighting almost 30 ounces was pulled out of a steep ravine a couple of years ago.

We decided we needed to get away from the standard crowd of prospectors who worked close to the roads and easily accessible trails. There’s nothing wrong with that, it’s just that our objective was to get to less worked ground. With this exploration effort, I wanted to get up the North Fork into more uncharted territory.

In 1871, Steven’s Trail ran from the town of Colfax, 4.5 miles down to the North Fork, and then back up to Iowa Hill another 3 miles or so. A few years ago this trail was placed in the National Registry of Historic Places. Its history is interesting.

There was already a road from Colfax to Iowa Hill, but it was very steep and a long way to travel. Even more important to the miner was some way to get upstream on this rich river flow. The Steven’s trail provided that access. Steven’s charged a toll of 25 cents for walkers, 50 cents for those traveling by horse, and 40 cents for each stock animal. The trail went miles above where the Iowa Hill road crossed the river, and the grade was easy to move equipment on, even though it dropped over 1,100 feet from top to bottom. It was heavily used in the late 1800s and then sort of disappeared, only to emerge again in the 1930s. For the miner, it provides great access to some potentially good diggings.

We parked at the trail head in Colfax. The trail was in excellent condition, generally wide and the grade reasonable. The 4.5 miles went quickly. It always is going down, especially when you’re anxious to get there. The tough part is coming out after working all day on the river.

The temperature was cold, but not freezing. We dropped off the trail and immediately went to sampling on one of the lower benches. Fine gold was showing in every pan, and we continued sampling to locate the spot where the heavier gold was dropping.

The area had multiple benches, the highest one carrying more quartz gravel than the lower benches. The geologic carving of the river was obvious and remnants of old mining camps were on these higher benches.

Old rusty metal was just about everywhere, and lots of old pieces of cans from the 1930s. The problem with prospecting the high benches 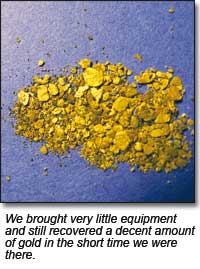 was the distance to the water and the access. The bench was 30 feet above the water line and maybe 40 yards away from the river in some places—they would have to wait until summer.

The footing was precarious because some minor ice was here and there. The river was up some, too, making it a little harder to find easy panning spots. We could see that more time would be needed than what we had, because there was a lot of territory to cover, but at least we were finding color, and at times, some really nice gold.

Our gold fever was eventually taken care of, for one day anyway. The trip down had taken 1½ hours and to get back took a good two hours. At 3 PM we reluctantly packed up and headed out.

We agreed to head back to this spot as soon as the weather permitted and get an early start. If we get out there early we could have at least six hours to prospect. Based upon what we found that day, a pennyweight or more would be reasonable for panning, and with some luck, a nice nugget or two would kick the weight up to a very worthwhile trip.

This area has lots of potential and the good news is that it’s available to anyone crazy enough to take the hike. I would recommend a companion for this venture. It’s a long way there and back and trouble could be just a slip away!

Cashing In Your Gold: Working With A Refiner

Many miners who have hoarded their gold for years are now tempted by higher prices. Several friends with multiple pound nugget collections have sold them recently for cash.

Without knowing or even thinking about it, I had put together a map that showed me a pattern of the ancient Sacramento River channel. I also had a distinct picture of where the ancient channels of several other creeks and rivers were running.

Underground in the Original 16-1 Mine

These days they employ the use of metal detectors and carefully scan the shattered rocks, hoping to hear that sound we detectorists love to hear.

January 2015
• How do I clean up gold encrusted with iron-sulfides?