Clark Pearson (Public Lands for the People) and I completed our third week-long trip to DC in early March 2019 in our quest to seek regulatory certainty and regulatory relief for miners.

While there, we received some excellent letters supporting our proposed legislation from the Idaho County Republican Party and from Idaho Representative Priscilla Giddings. Giddings letter prompted an immediate response from staffers for a key Senator on the Senate Energy and Natural Resources Committee. (We will be meeting with those staffers upon our return on April 2.)

We are focused on getting additional letters of support from other groups like the Idaho County Republican Party. Currently our focus is on similar groups in Alaska, Arizona, Colorado, Idaho, Louisiana, Mississippi, Montana, North Dakota, Tennessee, Utah and West Virginia, as each of these states is represented on the Senate Energy and Natural Resources Committee. If you have connections with groups in these states, please contact me and I can provide some sample letters to send them to request an endorsement.

We had several productive meetings during the week, and a few that were not so productive. It seems that Laura Skaer at the American Exploration and Mining Association (AEMA) was contacted by a staffer for Senator Risch (R-Idaho) and Skaer stated she does not support our efforts. When pressed, Skaer refused to specify what parts of our proposed legislation she might be willing to support and called our efforts “an unproductive distraction.” It was more than a little ironic since we have been a paying member of AEMA for fifteen years.

We are undaunted and we look forward to working with incoming AEMA president Mark Compton following Skaer’s retirement at the end of March 2019. 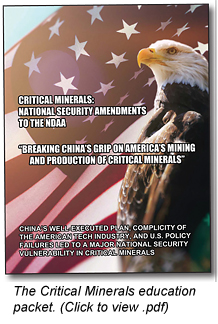 At two recent trade shows I attended, I had folks ask if our “Critical Minerals: National Security Amendments to the NDAA” legislation will apply to small miners, too. The answer is a resounding “yes.” The changes we are seeking will most definitely help prospectors, small operations and dredgers. If you haven’t yet read our proposals, you’ll find a link to it at the end of the online version of this article.

One other item to note... Upon our return home, we were contacted by Secretary of Defense Shanahan’s staff, and we are scheduled to meet with staffers at the Pentagon during early April. We also received a response from the White House, but we need to be more specific in our request. I can’t go into more details on this point right now, but we will get a meeting worked out.

If you haven’t yet joined Public Lands for the People, please consider doing so to help us pay for these efforts. You can find more information at www.publiclandsforthepeople.com. And if you know someone who might consider becoming a corporate sponsor, please let us know and we will send them our educational packet along with the proposed legislation.

You have made your presence known with the BLM or Forest Service, placed Mining District signs along the entrance points to your district, and found support with other local miners. But how do you gain popular support?

PLP Update: How to Restore The Rights of Suction Dredge Miners

A two-pronged approach is necessary to restore suction dredging; federal preemption needs to be established as addressed above via petition; and clarification from the EPA is needed to establish that no Section 402 permit is necessary when there is no “addition” of a pollutant.

In the meantime, I want to highlight some recent court cases won with the assistance of Public Lands for the People…

Toward the end of this summer, we expect another Federal Register notice will be published that deals with Forest Service mining regulations.

Subscription Required:
The Bawl Mill   • Our Readers Say   • Ask The Experts - Is there a Forest Service camping limit for mining claims?   • Ask The Experts - Should I be focusing on uranium and thorium?   • Ask The Experts - What is this sample worth?   • Ask The Experts - Need help finding production records   • How To File A Mining Claim   • Back to Basics--Finding Gold With a Pan and a Sluice   • Persistence Leads to Over a Pound of Gold   • Gold Prospecting for Better or Worse: The Superbowl Nugget   • Revisiting The Old Mini Patch   • Preserving the True History of the Ivanhoe   • Carr Fire Gold   • Secrets of Successful Prospecting   • Melman on Gold & Silver   • Mining Stock Quotes and Mineral & Metal Prices