The miners sued the Oregon DEQ in this case after the agency asserted that the “mere movement” of material already within a waterway constituted the addition of a pollutant under the Clean Water Act. The Oregon Supreme Court ruled in favor of DEQ and the miners appealed to the US Supreme Court.

Like several other Western States, Oregon handles Section 402 permits under a memorandum of understanding with the Environmental Protection Agency (EPA).

The matter appeared to be ripe for review as this is an ongoing permitting program that continues to ignore the intent of Congress by forcing miners to apply for a Section 402 permit when no such “addition” of a pollutant occurs. The miners were hopeful the US Supreme Court would take up the case after the court requested additional briefs be submitted. For reasons we cannot ascertain, the US Supreme Court did not include the case in their list of cases they would be hearing this term.

However, there is still a clear path forward; see “PLP Update” for more on this topic.

• Why Senate Bill S3422 is bad for America
“The Great America Outdoors Act” has been touted as a great piece of bipartisan legislation. It passed the US Senate by a vote of 73-25, and is expected to pass the House.

There is one item within the bill I can partially support, and that is the funding earmarked to eliminate a $20 billion backlog of maintenance projects at national parks—the bill would direct $9.5 billion toward that effort, though this amount would be added to the national debt.

The remainder of the bill is all bad news, and I’ll explain why below.

The bill calls for permanent funding for the Land, Water and Conservation Fund to the tune of $900 million per year. This is funding that will be used to expand parks, refuges and other government-managed lands.

Don’t misunderstand me—I love our national parks, and I’ve visited many of them. Some of my fondest childhood memories were made during our trips in the family camper, fishing and camping throughout California, Oregon and Washington. 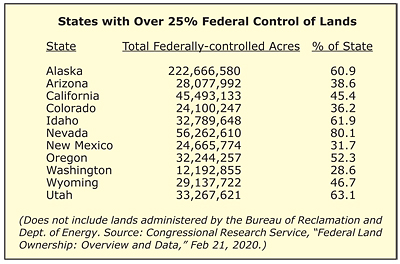 I especially remember when my parents saved up and splurged one year, renting a motorhome for a two-week trip when I was a teenager. We probably hit eight different national parks during that trip, and we made stops in California, Oregon, Washington, Idaho, Montana, Wyoming, Utah and Nevada. In my adult years, I visited many of the same camping sites with my wife and family, and added some additional visits to see a few of the parks I didn’t get to see as a kid. These included Mesa Verde in Colorado, and Zion, Bryce Canyon and Arches in Utah. I even made it eastward to drive through the Great Smoky Mountains and visited historic landmarks across many of the Eastern States and the District of Columbia.

While there are benefits to public lands, there are numerous major problems with this proposed legislation that will allow additional lands to be segregated.

Public land management has changed significantly since I was a kid. Most of the remote locations we frequented with my parents when I was a youngster are now off limits. Historic roads have been obliterated or placed off-limits by Forest Service Travel Management Plans or the Bureau of Land Management’s Resource Management Plans. These were the best places for families with young children to camp in complete solitude and enjoy the outdoors. These historic roads are absolutely necessary for miners and prospectors to reach their prospect sites and to explore for new deposits.

There is no provision in the bill to curtail the decommissioning of historic roads and trails when new federally-controlled lands are added, so we can expect access will become even more difficult over time unless changes are made.

Second, expansion of federal control has been devastating to rural communities. Federally-administered lands account for about 640 million acres or 28% of America, with the majority in the Western States.

Garfield County suffered large economic losses when President Clinton created the Grand Staircase-Escalante monument in 1996, and even though environmental groups predicted incomes would improve after the monument was established, incomes dropped significantly when natural resource jobs were replaced with seasonal tourism jobs according to Deseret News. Sheep and cattle ranchers, loggers and miners were forced out after federal agencies eliminated most grazing and all logging, mining and energy development. School enrollment decreased by 21% from 1996-2019 and is projected to drop further.

“The Great America Outdoors Act” does not provide any limits on how much land the federal government can control in any state or county, and there is no provision for approval by state and local governments.

There’s been a lot of discussion about China’s near-complete control of critical minerals and the threat this imposes to America’s safety and security. We currently have no substitute supply for rare earth minerals necessary for everything from solar panels and wind turbines to fighter jets and cellphones. China can cut off our supplies at a moment’s notice and we have no recourse.

The proposed bill contains no provisions for testing the mineral potential of public lands before placing those lands off-limits, and this is completely unacceptable.

“The Great American Outdoors is an extremely consequential piece of legislation,” said Congressman Paul Gosar (R-Arizona). “The bill combines necessary funding to address our nations park maintenance backlog with controversial provisions to make funding for the Land and Water Conservation Fund (LWCF) permanent. I am categorically opposed to permanent funding and reauthorization of the LWCF. This would take the program completely outside of congressional oversight and commit $900 million a year to be used for reckless land buying. The communities I represent in Arizona are tired of Congress giving up its responsibilities, piling up trillions in debt for future generations, and allowing the federal government to mismanage their land.”

As we mentioned last month, the proposed suction gold dredging regulations are utterly ridiculous. The Board proposed a long list of reporting requirements (water quality, turbidity, etc.) and placed all historical gold mining areas of California off-limits due to the possible interference with endangered or threatened species and the possibility that mercury may be present. And a permit would cost you in excess of $2,500 to dredge where no gold is present.

The proposed regulations are provided online.

As mentioned previously, there is still a clear path forward, and you can find out more in the “PLP Update.”

September 2015
The Washington Department of Fish and Wildlife (WDFW) issued emergency rules without public comment just prior to our publication deadline.

Gold and jade are actually only minor mineral resources for the Northwestern Alaska region as a whole. Modern prospecting has focused more on base metal than precious metal resources.

December 2015
Bottom line for you fellow miners: file your claims now in these areas or risk being forever locked out!


During discussions with other property rights advocates and members of the current administration, Karen Budd-Falen’s name was mentioned many times as a possible director for the Bureau of Land Management (BLM).