It's Time to Get the Heck Out of China

Restarting an American-based rare earths production program has finally become a priority, but China maintains firm control over this sector for now. Rare earth elements are necessary for technology and weapons systems, and no substitute is currently available. You’ll find them in everything from solar panels to fighter jets; from iPhones to submarines.

The only mine in the United States currently producing rare earths is the Mountain Pass mine in southern California that is now owned by MP Materials, though there are other US-based companies in varying stages of exploration. (See “Unique Rare Earth Mine in Texas” in our December 2019 issue for one such example.)

Molycorp was once a leader in producing rare earth elements.

“Between 1965 and 1995, most of the world’s REE came from the Mountain Pass, California, bastnasite deposit,” according to Stephen B. Castor in “Rare Earth Deposits of North America” published by the Nevada Bureau of Mines and Geology in 2008.

In the mid-1990s, China began producing and refining rare earth elements on a large scale. It was a calculated and well-executed move that allowed them to gradually force industries to move their manufacturing to China. The lack of environmental constraints in a communist country coupled with extremely low wages allowed China to produce rare earth elements at a fraction of the cost of its American competitor. As a result, Molycorp shuttered its Mountain Pass operations in 1998.

In 2007, Chevron Mining restarted the extraction plant at Mountain Pass on a smaller scale. That same year, China began restricting exports and imposed tariffs, which allowed China to give preference to Chinese manufacturers. American companies were placed in a compromising position; they could either manufacture their products in China under favorable terms or face very high costs to obtain and ship refined critical and strategic minerals to America and elsewhere for manufacturing.

In 2008, Chevron sold the operation to a private group named Molycorp Minerals LLC. Over a billion dollars was spent to build new ore processing facilities over the next five years and mining was restarted. But China again flooded the market with low-priced rare earth elements, and the company filed for Chapter 11 bankruptcy in 2015.

China’s control of the rare earth market reached around 96%.

A new player entered the scene in July 2017, doing business under the name MP Materials. The partnership was able to purchase the Mountain Pass mine out of bankruptcy for a mere $20.5 million. While mostly made up of US investors, Chinese government-owned Shenghe Resources Holdings became a minority shareholder. And there lies the current problem.

The sale took place during the Obama administration, and the Treasury Department’s Committee on Foreign Investment decided not to intervene to prevent the sale.

We are at a crossroads; either we establish the mining, production and refining of rare earth elements here in the US or we remain subjected to the whims of the Chinese government.

The US Department of Energy (DOE) recently blacklisted MP Materials because of the partial Chinese government ownership and DOE told government scientists not to work with MP Materials. In the meantime, MP Materials applied for millions in funding from the Pentagon as part of a broad initiative to help relieve US reliance on China, while, at the same time, shipping 50,000 metric tonnes of rare earth concentrates to China each year for refining.

Hedge fund owner James Litinsky, who is MP Materials’ majority owner, claims the refining equipment at the mine is not properly designed to handle rare earth elements efficiently.

President Trump issued Executive Order 13817 back in 2017, “A Federal Strategy to Ensure Secure and Reliable Supplies of Critical Minerals” to try to alleviate America’s vulnerability to supply disruptions.

The Defense Department asked for proposals from miners to produce and refine rare earth elements in America in 2019, and promised partial funding from the Pentagon’s budget. Australia’s Lynas Corporation and another group going by the name Blue Line Corporation were chosen to begin developing refining and production facilities in Texas for heavy rare earth elements, but light rare earth elements are the ones most needed for specialty materials coveted for technology and military uses.

As I write this, MP Materials announced they also received a Defense Department contract to supply heavy rare earth elements. There do not appear to be many other options at the present time, at least until alternative mines and refineries become established.

Other companies that have applied for funding from the Pentagon include Canada’s Medallion Resources LLC and Search Minerals Inc.; NioCorp of Nebraska; Materion Corp and UCore Rare Metals of Alaska; and Texas Mineral Resources Corp.

According to the DOE, the US government is actively seeking new sources of rare earth elements while exploring methods to recycle rare earth magnets, and does not share any of this research with MP Materials. 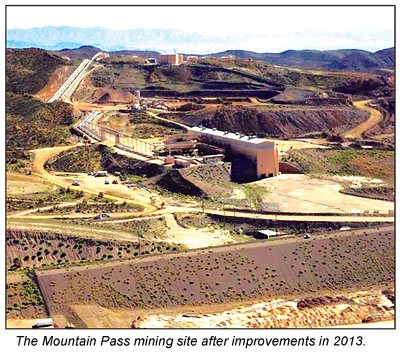 All this also ties into suction dredging. Rare earth elements were found and recovered from placer deposits that were dredged near Cascade, Idaho, in the 1950s. According to Castor, 7,000 metric tonnes of monazite were produced from those Idaho placer deposits. There are bound to be other locations where critical and strategic minerals will be recovered by suction gold dredgers. What is needed is a federally funded testing program so dredgers can send in samples of black sands.

Meanwhile, China continues to wreak havoc on the environment. Mercury vapor comes in to the West Coast from smelting operations that are brought across the Pacific from China on the jet stream. Dan Jaffe, an atmospheric and environmental chemistry professor at the University of Washington at Bothell, calculated that Asia emits 1,460 metric tons of mercury per year, twice as much as previously thought—and that was back in 2004!

Basic safety measures that we have come to appreciate in the West are ignored in China, and a tailings breach at a Chinese molybdenum mine in March provided the latest such evidence. The breach of a tailings dam at the Yichun Luming molybdenum mine in Heilongjiang Province on March 28 sent an estimated 2.53 million cubic meters of contaminated waste into Chinese rivers, covering a distance of over 63 miles.

America has vast resources of critical minerals and the strictest environmental standards in the world, but miners need the regulatory certainty necessary to invest in sustainable operations and tech companies must take an ethical stand to stop the rampant environmental destruction in China that is spreading to American soil.

December 2016
“When dealing with federal agencies...”

Can't We Just Do Something?

July 2011
We know we lack critical minerals. We know the causes. We know the need. We have the knowledge we need right now. Why can’t we just take action and fix the problem?


We are in the planning stages for our next trip to DC. Clark and I are looking at returning after the mid-term elections, probably around the end of November or early December, to continue discussions with members of Congress…