Interview With A Coho Salmon

We’ve obtained the rights to publish this exclusive interview conducted on the Klamath River between David, an environmental activist, and a Coho salmon.

David: “What do you think about these suction gold dredgers?”

David: “They’re the miners who run those noisy machines, vacuuming the river bottoms in search of gold while destroying the rivers.”

Coho: “They make noise? Hmm, I hadn’t noticed. They’re never running when I come through. Does it bother you? It seems like you’re bothered by it. Have you tried going to a different area so you aren’t annoyed by the noise? Do you have a problem with sharing the river? Is that the issue? You know, I hear there’s counseling available for those humans who have problems with sharing.”

Coho: “Sorry. I spend much of my life out in the ocean. I’m not really around when the dredges are operating, so the noise doesn’t bother me.”

David: “Don’t you swim up the rivers during spawning season and lay your eggs?”

Coho: “Yeah, but I’ve heard there are some rules or something the dredgers follow so they aren’t in the water during that time.”

David: “Well, what about these holes they make when they move the gravel and boulders? That must make you pretty angry!”

Coho: “Suction dredgers create the holes? I thought you guys did that, because those are a huge help. Some of the water is too warm for us. The deeper water in the hole is cooler, and it’s a great place to get out of the faster currents and rest. Holes are awesome.”

David: “Never mind. What about those gravel areas, where the compacted gravels are broken up and redistributed?”

Coho: “I’ve been meaning to thank you for that. We lose a few of our offspring if high water comes, but we still prefer those areas for spawning.”

David: “Ummm, let’s move on. Let’s talk about mercury. Mercury is in the gravels and these dredgers are stirring it up. Doesn’t that bother you?”

Coho: “Yeah that shiny, liquid metal is nasty stuff. It messes with my nervous system.”

David: “Now we’re making progress. So tell me how the dredgers are causing you severe harm by stirring up the mercury?”

Coho: “Yeah, I think you’re confused. I’m pretty sure when they vacuum the river bottom to get the gold they also capture almost all of the mercury. The tiny amount they don’t get ends up making its way back through the gravels and settles in the cracks of the bedrock. I heard that mercury is bad for humans, too! I’m sure you guys know this. Haven’t you read the studies?”

Coho: “Are these studies biased? Are the results predetermined?”

David: “Let’s get back to the questions. How about all that sediment they stir up? That must be a pain.”

Coho: “Have you ever been to a river during the winter run off? That’s some serious cloudy water, like thousands of times worse than what comes off a dredge. The dredge plumes are a joke in comparison. Next question.”

David: “Okay. Let’s talk about trash. You know, garbage. Doesn’t that stuff mess up your habitat?”

Coho: “Sure does. Those dredgers leave tons of lead with these stringy things attached.”

David: “Ummm, the lead is actually left by fishermen.”

David: “Well, we collect money, which we use to conduct studies, educate the public, and provide legislators with funds for their elections so they will support our position. We also file lawsuits against the state to stop any activity that might damage your environment.” 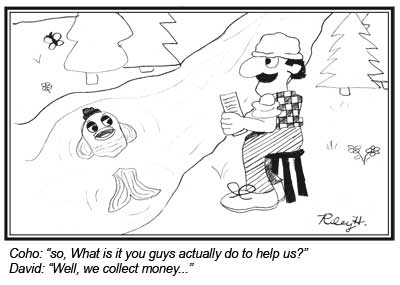 Coho: “That’s cool. So you constantly harass the fishermen while supporting the dredgers? And the Indians too, of course—they use gill nets.”

David: “Ummm, no. We team up with fishermen and Indians and sue the dredgers.”

Coho: “I am soooo confused.”

David: “The fishermen, the Indian tribes, and other groups who want exclusive use of the rivers are the ones who give us money, so we’re all on the same team.”

Coho: “So, you team up with those who kill us to stop those who help us?? Even a fish can recognize a problem with your logic!”

David: “What would you recommend?”

Coho: “Why don’t you guys start suction dredging? That would be a huge help to us. You could totally clean up our habitat, get rid of that nasty mercury and those lead things, make some nice spawning beds and some of those awesome holes. You’d get some gold to help your family and the economy. I hear the economy is pretty messed up right now.”

David: “You want us to start dredging?”

Coho: “It would create a win-win situation for fish and humans! Oh, I forgot—the noise bothers you and you don’t like to share. I guess it’s much easier to mine the humans for contributions than it is to mine for gold. And it seems to me you should be suing the fishermen instead of the dredgers.”

David: “Just between you and me, the fishermen are the next target on our list, but we’re not done using them yet.”

April 2005
Excerpts from CMJ published 50 years ago this month.

November 2016
Within these districts, some of the roads and trails have been reopened for access, critical habitat designations have been scaled back, and a few Mining Districts were completely removed from proposed withdrawals.

March 2004
• Nearly half their income goes to the government...
• Prison life has its priviledges

Can You Recognize Valuable Ores?

The process of recognizing ores all starts with being able to recognize some basic minerals and knowing what hard rock ore looks like in the districts where you prospect.

It's the Bottom of the Ninth—And Not Just for California

December 2013
If we lose, the radical environmentalists have a roadmap to replicate their success everywhere.


A federal judge has ordered the FBI to speed up the release of records about the search for the legendary gold, ruling in favor of Finders Keepers, the treasure hunting outfit that led FBI agents to the remote site.