The first actual discovery of gold made on the lands of what is now the State of Georgia is shrouded in the mist of history.

March 2012
...here in America, another legislative financial crisis was averted as the National Debt limit was extended in January to $16.394 trillion. Only one year ago the authorized debt limit was a “mere” $14.294 trillion.

February 2010
The main issues in this case involved the DEQ’s authority to regulate discharges under sections 402 and 404 of the Clean Water Act.

Nearly everyone who has drywashed or metal detected for placer gold within hardrock gold-mining areas is aware of "residual placers" (a.k.a. seam diggin's)...

September 1999
The Interior Department is proposing a moratorium on new mining and grazing in a 176-square-mile area of central Arizona dotted with American Indian ruins, a possible first step toward a new national monument. 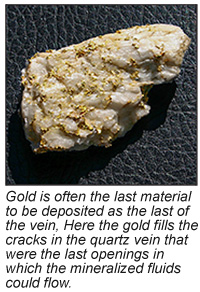