Gold in The Midwest--Part I

The Midwest includes Illinois, Indiana, Iowa, Kansas, Michigan, Minnesota, Missouri, Nebraska, North Dakota, Ohio, South Dakota and Wisconsin. In this article we will take a close look at why gold is found in the Midwest, and in following articles we will look state-by-state at locations where gold has been found, along with popular prospecting locations, historic production, and why the gold is found in each location.

On a back road excursion after moving to the Midwest, I stumbled onto a picturesque little store alongside a creek in the rolling hills of south-central Indiana. When I went inside to find out where I was, I noticed that they had various gold pans and other pieces of gold recovery equipment for sale. In addition to getting directions I inquired about the gold prospecting equipment and why they had it. The proprietor of the Gatesville Store, Robin Stevens, told me that people find gold in the creek all the time and that people come from other states just to prospect for gold there. “Gold? Here?” I thought. 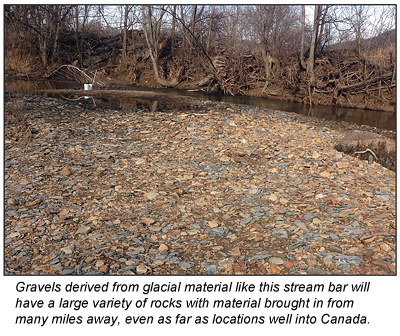 Since I wasn’t in any kind of a hurry, I decided to purchase a gold pan and go out to the creek to see what I could find. Once at the creek I panned my first sample and it revealed about ten little colors of gold in my pan. This was a surprise. It was enough to pique my interest, and I returned the following weekend to spend some real time prospecting there. Over the next few years I spent much of my free time learning about gold all across the Midwest and heading out to prospect various areas.

The moraines were left from various periods of glaciation during the Ice Ages. The moraines were formed when material was pushed southward from Canada by glaciers. The ice then receded during the Quaternary Period, leaving those glacial gravels behind. During this time there were multiple events of glacial action. The concentrated till pushed and left from receding glaciers became moraines, drumlins, kettles, and eskers. Some of these glacial features were moved from great distances originating in Upper Canada southward at varying degrees into what is now the Midwest region. In this till left by the glaciers are many minerals, including gold, diamonds and other semi-precious stones.

Gold is rarely found in appreciable amounts in the moraines and other glacial features themselves, rather the gold is concentrated along rivers, creeks, drainages, and ancient water flows from past receding glaciers that cut through the moraines. Gold-bearing quartz cobbles are also occasionally found within the glacial till. Early prospectors thought these quartz cobbles were from nearby lodes, but no lodes where ever found.

Gold can potentially be found in all the glaciated areas of the Midwest, but to find it in any appreciable amount one needs to look to areas where the gold gets concentrated by more recent water flows.

Lode Deposits
Placers resulting from glaciation are not the only sources of gold in the Midwest. Lode deposits do exist, but only in a few areas. Michigan, known for its copper deposits in the Keweenaw Peninsula, also produced gold as a byproduct from the same mines. Close to some of the great copper mines in nearby Marquette County, numerous lode gold prospects and some larger gold mines had significant production. The Ropes gold mine discovered in the early 1880s operated for 14 years and produced $645,792 in gold and silver. Later, the Ropes mine was reopened and produced gold into the late 1980s. In other locations of the Upper Peninsula, the Lake Superior mine and Michigan mine produced spectacularly rich specimens of gold in quartz. 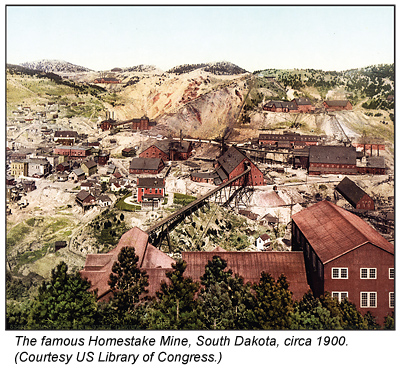 In the Black Hills of South Dakota, prospectors in 1874 discovered placer gold in many drainages and a rush quickly ensued. Shortly after the rich placer discoveries were made, prospectors located a number of rich ledges that were the source of the placers in Deadwood Creek. Soon after, a larger rush came to the area and several lode mines were staked and operated and many were significant producers. The Homestake mine near Lead has a long history of production. Lode deposits in the Black Hills region are still being explored by large mining companies. By 1971, estimated gold production from the lode mines of the region was almost 35 million troy ounces.

In west central Kansas there is an area of Cretaceous age shale beds where gold has been found, though in rather small amounts. The Carlile shale is a bed of gray-to-black shale 300 feet thick, which is soft at the surface and greatly decomposed. The shales that contain gold were pyrite-rich and at the surface the iron oxidized the shale to a brownish yellow color. The quantities of gold in the shales were never large enough or rich enough to spur any kind of major mining activity though there were rumors of assays up to 15 ounces per ton from the gold ore. This is speculated to be purely promotional to gain interest into the area and no other assays proved to be that good.

Beach Deposits
Though the Great Lakes are not oceanic or subject to great tidal influences, they are large enough to develop large, powerful waves and surges that can winnow away lighter sands and push and concentrate heavy black sands with gold along some of the beaches much like the ocean can.

Lake Superior is the most well-known lake for beach placers, though some sources say small amounts can be found on select beaches of the other Great Lakes as well. Since the Great Lakes Region was glaciated, much of the gold is initially deposited by past glaciers, though it is possible for some lode-derived placers to show up along beaches in the Upper Peninsula. The wave action along beaches ultimately concentrates gold in recoverable amounts, and the areas to be looked at for prospecting should have large areas of heavy black sand.

In following articles of this series, I will break down places to find gold state-by-state, which can hopefully lead to some prospecting success in locations near you if that is the part of the country where you live. As with any kind of prospecting, one should thoroughly be aware of local laws regarding gold prospecting. Laws can vary greatly from state to state or even from one location to another in a given state. A great way to gain knowledge of these rules is by joining a local gold prospecting club. Many times these clubs may already have access to good areas for prospecting.

Editor’s Note: In preparation for this series, read “Glaciers and Placer Gold Deposits” by Chris Ralph (November 2016 issue) for an in-depth look at glacial deposits. 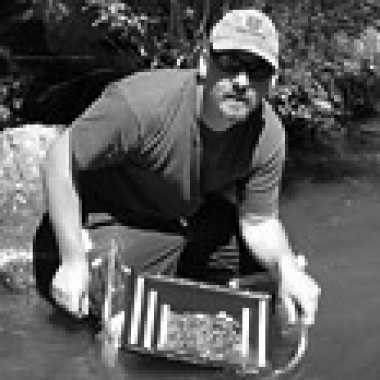 October 2015
Every Spanish village seems to hold their pride in one unique area of expertise. Pamplona has its bulls, Barcelona its architecture, and gold panning belongs to Navelgas.

Fran, and I had made a practice of turning big boulders in gold producing areas to find some great rewards. Sometimes it was slow and frustrating, but in the end “We got the gold!”

Want to Go to Australia?

Every year there are large nuggets found by the diligent, and occasionally by the lucky newbie.

...more folks rolled in on Saturday morning and many were eager to venture out onto the Sleepy Bear property—all 415 acres—and try their luck at finding some gold.

I get a lot of questions from prospectors about garnets, their value and what they tell us about the geology of some types of mineral deposits. So I thought it would be a good idea to take a closer look at the lowly garnet and learn a bit more about it.

The Environmental Protection Agency (EPA) has been attempting to extend their authority and intimidate miners and other public land users for decades. Suction gold dredgers are no exception, and we want to highlight a recent example of how to deal with this federal overreach.

Get Boots On The Ground For Patch Hunting

The first requirement is permission from a land owner. This can be tricky and it’s always a bit nerve-racking to approach a stranger cold with such a request.

Subscription Required:
The Bawl Mill   • Ask The Experts - How do I obtain a map of Montana gold & sapphire gravel bars?   • Ask The Experts - How do I process this white quartz with black striations?   • Ask The Experts - Does gravel + bedrock = gold?   • Back to Green Valley--With A Sluice   • A Lesson In Underwater Sniping   • More Fiddling While Forests Burn   • Achieving Accurate Metal Detector Discrimination   • My New Passion--Crystal Hunting   • The Half-Mile Claim   • Melman on Gold & Silver   • Mining Stock Quotes and Mineral & Metal Prices   • Gold Prospecting for Better or Worse: White Knuckle Mining

Free:
Legislative and Regulatory Update   • Unique Rare Earth Mine in Texas   • PLP Update: Another Suction Dredge Case Heading to the US Supreme Court