Crisson Gold Mine Robbed At Gunpoint

Speaking of a need to be cautious, as Ray Mills discussed in his article  “Are You Being Followed?” earlier in this isse, our friends at the Crisson Gold Mine in Dahlonega, Georgia were the victims of an armed robbery on February 3.

Tammy and Tony Ray own the mine, which offers panning for gold and gemstones, mining equipment, jewelry, historical tours and more. Their daughter, Brianna Ray-Weaver, was working in the shop at the end of the day along with Tommy Dawkins, another employee, when a man walked in, shut the door and locked it behind him.

Brianna said the suspect announced, “This is a robbery,” and brandished a firearm, and then told her, “Do what I say and you won’t get hurt.”

The suspect also claimed he had a partner somewhere nearby, and told her, “If any of you come after me, my buddy will kill you.” 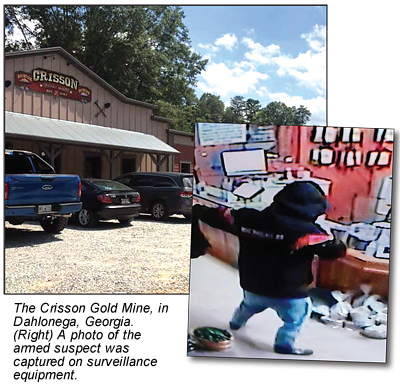 The suspect brought a duffel bag with him that he filled with two employee cellphones, wallets, cash from the register, gold nuggets and several trays of jewelry. Dawkins was told to sit on the floor while Brianna was ordered to help gather some of the valuables. It seemed the robber knew where the most expensive products were and targeting those cases, leading employees to believe he had been to the store before. He was able to leave with well over $100,000 of cash, gold, jewelry and other merchandise.

Brianna called it the longest three minutes of her life.

A $1,000 reward was offered by the Lumpkin County Sherriff’s Office for information leading to the arrest and conviction of the suspect or suspects. That reward was increased to $10,000 after donations from friends and family poured in.

This was the largest robbery of its kind in Lumpkin County, Sheriff Stacy Jarrard said.

Reaserch is a critical step in finding new areas.

When we got set up and I started to swing the coil over a small mound, I got a good signal, faint but repeatable.

I will have to admit, I actually was brought to tears just thinking about what I had just done. I knew the gold was there, but I never thought I would be so fortunate to find such a prize nugget.

Years later I returned with a new detector with a smaller coil and detector technology more sensitive to smaller nuggets. I found my first nugget within five minutes. I had a second five minutes after that.

…with renewed determination and a belief in success, I did finally find a nugget. It was there waiting under a bush not 50 feet from my truck.

I Was Looking for Gold But I Found Jade

Excited for this first notable evidence, I returned to that riverbed, looking for another paystreak and obviously more jade.

While a large number of locations have yielded some placer gold, most of the state’s placer production has come from a few productive districts.