That was the message on Wednesday, May 29, 2019, from the People’s Daily, China’s largest newspaper, declaring that cutting off rare earth minerals to America looks to be the next step in the escalating trade war. It’s a warning Public Lands for the People (PLP) delivered to the previous and current administrations and members of Congress.

Rare earths and other critical minerals are essential in the manufacture of everything from iPhones, computer components and television screens, to radar guidance systems, rail guns and Tomahawk missiles. They are also essential in green products like solar panels, wind turbines and electric vehicles.

“Will rare earths become a counter weapon for China to hit back against the pressure the United States has put on for no reason at all? The answer is no mystery,” the People’s Daily added.

History tends to repeat itself.

In the early 1970s, the Organization of Petroleum Exporting Countries (OPEC) created chaos in America by withholding petroleum supplies to retaliate against America for supporting Israel. Gasoline prices in the United States quadrupled and the lack of supplies led to rationing across the United States.

America is in an untenable position with respect to China. In 2010, China cut off rare earth supplies to Japan following a maritime dispute, which brought Japan’s technology and military industries to a standstill. If the Chinese cut off our supplies of critical and rare earth minerals, America is currently helpless to respond even though we have vast resources available here in our country.

According to Dr. Ned Mamula, the US has no stockpiles available for 12 of the rare earths needed for national security. We are currently over 90% dependent on China for all rare earth minerals and, to varying degrees, for 25 other critical minerals.

Current permitting schemes can take ten years, fifteen years, or even longer for a mining company to move from exploration to production. That’s assuming the resource has already been identified and has not been locked up by a withdrawal. And there are currently no facilities in the United States to take rare earth ore and extract the minerals to produce a useable product.

In Canada and Australia—two countries with strict environmental standards like ours—a mining permit can be obtained in two or three years. Their regulatory agencies work in concert to get that permit approved. In contrast, local and state agencies in America often add regulatory burdens or pass laws to make a project unprofitable or block it entirely.

US courts—especially the 9th Circuit—and federal agencies have muddied the waters, calling an “inaction” the same as an “action” in terms of NEPA and deferring to an agency’s own interpretation of their regulations under the Chevron deference doctrine.

The EPA continues to require permits for insignificant activities, even those when there is no addition of a pollutant as required by statute.

Forest Service Travel Management Plans have blocked access to existing and promising exploration targets with the aid of the 9th Circuit, which ruled the Forest Service can determine when “a road is not a road.”

The Forest Service continues to rely on varying interpretations of what constitutes a “significant disturbance of surface resources” that deny a miner regulatory certainty.

America’s rare earth minerals are buried deep under a regulatory burden so large that no individual or company is willing to risk investing their hard-earned dollars in a project that is unlikely to earn a return on that investment.

The tide is beginning to turn, albeit very slowly.

On December 20, 2017, President Trump signed Executive Order #13817, requiring the federal government to develop and implement a strategy to reduce the nation’s dependence on foreign sources for critical and strategic minerals and metals. 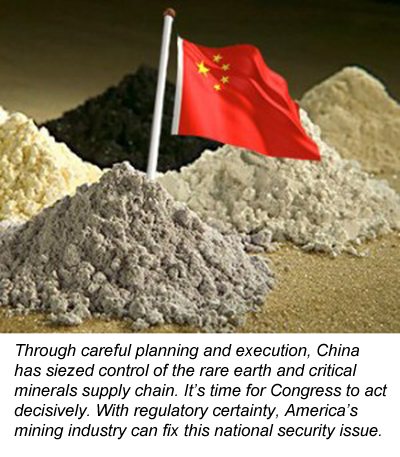 Former DOI Secretary Zinke followed up with Secretarial Order #3359 the next day to speed the process of defining critical minerals, improve identification of current and potential deposits, and streamline permitting.

The non-profit group Public Lands for the People, along with monthly trade magazine ICMJs Prospecting and Mining Journal, teamed up to offer a solution.

Over the past four years, PLP has met with high-ranking members of the US Geological Survey, Forest Service, Bureau of Land Management, Mine Safety and Health Administration, Environmental Protection Agency, Armed Services, the White House, and countless members of the House and Senate to help educate them on the critical mineral and rare earth crisis. Over 150 educational packets were distributed, along with a ten-point legislative proposal to jump-start rare earth mining and production in the United States. The proposed legislation is titled “Critical Minerals: National Security Amendments to the NDAA—Breaking China’s Grip on America’s Mining and Production of Critical Minerals.” (It’s available online at www.icmj.com/resources/ndaa/)

The alarm bells have been ringing, yet not a single item in this proposed legislation has been enacted by Congress.

This is not a new problem -- just take a look at this video, published back in July 2014:

Brigadier General John Adams, US Army (retired), stated, “China has achieved monopoly control of rare earths and other critical minerals essential to America’s military and high-tech industries. Without a reliable domestic supply of these minerals, we cannot maintain our advantage in industry nor on the battlefield. China currently has the ability to bring our military to a standstill by cutting off our supplies of critical minerals. These proposed amendments are a huge step in the right direction. I urge you to support ‘Critical Minerals: National Security Amendments to the NDAA—Breaking China’s Grip on America’s Mining and Production of Critical Minerals.’ It’s a matter of national security.”

This fire has been smoldering for years and China has a monopoly on the fire hoses. That fire will soon be burning out of control. The Question is: Will Congress allow American miners to act before the whole neighborhood is engulfed in flames or will Congress continue to fail us?

Scott Harn is the Pres/CEO of ICMJ’s Prospecting and Mining Journal, a trade publication that has been published monthly since 1931. It’s available in print and online: www.icmj.com