Time is a commodity which if traded would dwarf the price of gold. Nobody has enough of it; we can’t make more of it; and whether squandered or spent wisely, once gone, it’s gone forever. To find gold we have to spend time.

March 2011
How many more clays seams lie adjacent to known shear zones and quartz veins in the pocket areas of southwestern Oregon?

I remember in the couple of years after that 1997 flood, prospectors around California did very well, taking ounces of gold from places that had not yielded any gold for years before that.

June 2013
Trinity County is located in the far northwest corner of California and stirs up many different memories for those who have been there. 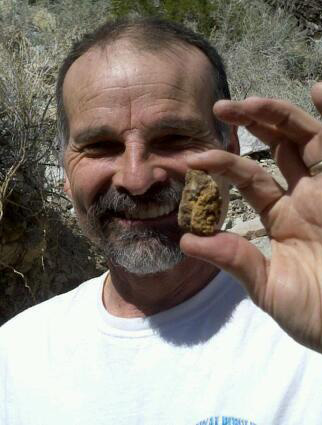 
"The practice of gleaning goes back thousands of years"

January 2011
Rick donned a pair of fiberglass shin guards that he normally wore dredging, just in case he uncovered the rattlesnake during his digging and rock moving. I wasn’t convinced they were going to provide enough protection.

I opted for the underwater portion of the river. All I have to do is float down the river and pick large flakes and small nuggets out of cracks and crevices while staying cool in the summer heat.

Right away I got a target, and it ended up being gold from a nice little bench. With only an hour left of daylight, I continued heading upstream and found five more tiny pieces of gold with my VLF…