The History of Mining Claims

Have you ever been camping in a Forest Service campground? How about off-roading in the desert or some long lost dirt road in the middle of wilderness? Many people do not understand that we Americans have these freedoms because our country’s forefathers opened the West to mining of all types. Congress decided that if they shared the riches of our lands with the people, we would colonize and expand the states at a much faster pace, thus the birth of public lands and mining claims in America.

A mining claim is a very special type of real property. In July 1866, in the interest of developing the mineral resources of the West, the United States Congress granted the Mineral Estate of the Public Domain to the people of this country. This act, known on the Capital floor as HR 365, gave all US citizens (and those who had declared their intention to become citizens) the right to explore the mineral lands of this nation and to locate, occupy, develop and patent any valuable mineral deposits which they discovered. In doing so, states like California, Oregon, Nevada and Arizona quickly established themselves as self-reliant and prosperous, almost overnight.

In 1870, Congress also adopted the Placer Mining Act, which was later combined with the 1866 Mining Act to become the General Mining Act of 1872. For 150 years, persons in this country have enjoyed the unique rights and opportunities given to us by our most forward-thinking leaders of those days. 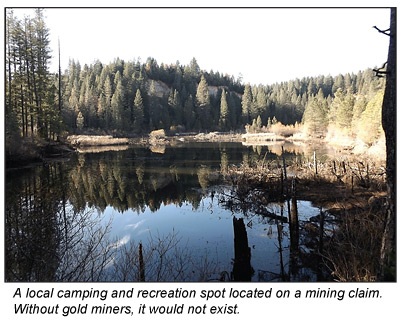 In every one of the United States, an unpatented mining claim is a form of real property, meaning that you are free to sell, lease or rent your mining claim, as well as pass it on to your heirs. Please note that as a claim holder, you are required to file an annual claim assessment with BLM by September 1st of each year. Each claim costs $165 per 20 acres per year to maintain. If you have less than 10 mining claims, you are eligible for a small miner’s exemption and can file an affidavit of work performed on your claim along with a $15 fee.

As the owner of a viable mineral deposit, unlike other people, you will enjoy the ability to produce wealth from the earth with your own elbow grease. Most people simply obtain wealth and are largely subject to the whim of their employer. In trying economic times, a mining claim—especially one with a valuable mineral like gold or platinum—can be a real hedge against recession or depression. With gold at over $1,800 per troy ounce, anyone willing to work hard and put forth an effort to become more knowledgeable about gold mining can enjoy a nice supplemental income or possibly become a full-time miner.

Many people today do not realize that most of our property rights in the Western States originate from those acts of Congress. Though there is currently a moratorium on the issuing of patents to mining claims, this will hopefully return someday in the future. As a mining claim owner, you are entitled to use your claim in a manner that is suited to its mineral development. You are the exclusive owner of all the locatable minerals on your claim and have the right to the “use and enjoyment” of the surface of your mining claim. (These minerals are not limited to just gold, nor is gold the most valuable locatable mineral found.) 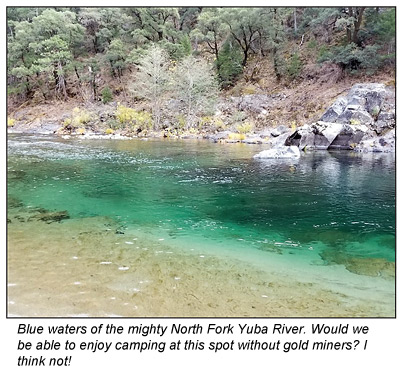 Though you also have the right to occupy your claim, please note that your right to occupancy is dependent on if you are actively mining on your claim. If you desire to build lodging or storage on your claim, the District Ranger (on lands administered by the Forest Service) may require you to submit a Notice of Intent (NOI) so the agency can determine the best way that this can be accomplished without excessively impacting the environment.

Typically, the Forest Ranger will require the lodging be on wheels and easily removable, such as a camping trailer or RV. A bond is a cash deposit for a certain amount set by the Forest Ranger and will also be required. This bond is refundable once you satisfy the conditions of your NOI. It is possible to erect a gate along certain roads to protect your mining operation as well, but only with approval. Not all roads can be gated due to public access issues, but in some rare instances you can get a gate permitted on your mining claims.

Now that we have a brief history and understanding of what a mining claim is and why it exists, let’s explore what America may have looked like if these mining acts were never passed.

Imagine coming to a western state, looking forward to a few days along a river with pristine, clear, blue water. You are going to do some panning for gold, cast a fishing pole in the water and just relax. Well, can you? Most campgrounds along these rivers are located on public lands; would there even be campgrounds along the rivers without our mining acts? Would it be legal to fish? Would all the land be owned by private entities that bought it all up 100 years ago? If so, would they allow us to mine or fish their rivers and lands? If they did allow us, at what cost? In this instance, the recreation abilities we currently have just might be non-existent without the mining laws.

Let’s explore another scenario. Imagine you just wanted to go on a Sunday drive with the family to some far-off lake that was created by a water company back in the late 1800s or early 1900s. This lake is 20 miles off the beaten path and accessed by dirt roads. The dam was built in 1903 for the purpose of holding water that a ditch company would then sell to places that do not have it. What would this lake and the surrounding land look like without the mining acts? Well, it would not be a lake at all. In fact, the roads to the lake probably would not even exist. Why, you ask? The answer is simple—the roads and lake were built to supply the gold miners with water where there was none. So, ask yourself this: Would your favorite man-made lake even exist without gold miners? The answer is likely “No.”

As you can see, Americans past-time activities are largely what they are today due to our country’s gold mining history. Have you ever been to an old gold rush-era town such as Downieville, California or Nevada City and enjoyed a beer or nice meal sitting in a building that obviously has stood for well over 150 years? Without the mining acts, you can throw that experience out the window because neither of these towns would even exist without gold miners and the mining acts.

I think I have made the point that the impact of mining on our country’s history is obvious and enormous. If you live in a western state with gold mining history, take a moment to look around, appreciate the world we live in and the hard working, dedicated and plain old “tough as nails” folks that came before us in the name of gold mining.

Have you thanked a gold miner lately? If you are a gold miner, pat yourself on the back and know that if you like your current lifestyle, it is only possible because of a gold miner!

Common thought is the switchback slows the velocity of the rushing water and gold drops out from the cut bank to a fill gravel bar within or below the switchback. I am not going to disregard that model; however, I hope to improve upon it.

Why Haven't They Mined This Claim?

Improvements in mining equipment and techniques, along with a higher gold price, make many mining properties profitable today that may not have been in the past.

Palladium may well be an underexplored element and therefore an opportunity for prospectors and geologists. This is because they are often less than obvious and other than the native metals, a chemical analysis of samples is required to identify PGM-enriched rocks.

Historically, Montana has been an important gold producer, in terms of both lodes and placers, and it still produces gold for the prospector today.

The Ely Copper-Gold District of Nevada

The main ore deposits of the Ely district are associated with an east-west belt of altered and mineralized rocks measuring about one mile wide that extends 8 miles westward from Ely.

While a large number of locations have yielded some placer gold, most of the state’s placer production has come from a few productive districts.

Subscription Required:
The Bawl Mill   • Ask The Experts - Micron gold: how much to equal an ounce?   • Ask The Experts - How do I properly denote a mining claim? Can I use GPS coordinates?   • The Forms of Crystalline Gold   • Evolution Of A Desert Wash Plant   • Gleaning for Gold   • Making the Jump to Electronic Prospecting   • The Info Is Out There   • Gold: Is It Everywhere?   • Blast From The Past: Gold of the Common Man   • Thieves Make Off with Tons of Gold & Silver Ore   • Mining Stock Quotes and Mineral & Metal Prices   • Gold, Silver & Stocks—How Do I Decide Where to Invest?   • New Mexico Reaches $32M Settlement Over 2015 Gold King Mine Spill   • Our Readers Say