National Advisors Clark Pearson and Joe Martori of the Minerals and Mining Advisory Council (MMAC) are in Washington, DC, as I write this.
Unfortunately, I could not go this time due to a prior important commitment. Instead I was in Wyoming, speaking with about ninety miners who are interested in learning how Mining Districts work and how they can assert their rights as federally recognized, MMAC-assisted Mining Districts.

Pearson and Martori have been meeting with members of Congress to educate them about mining, strategic and critical minerals and metals, the lack of access due to closed roads and routes, and to offer up a solution with MMACs proposed bill and amendments. They will be in DC for a full week, focusing on the Senate side on this trip. 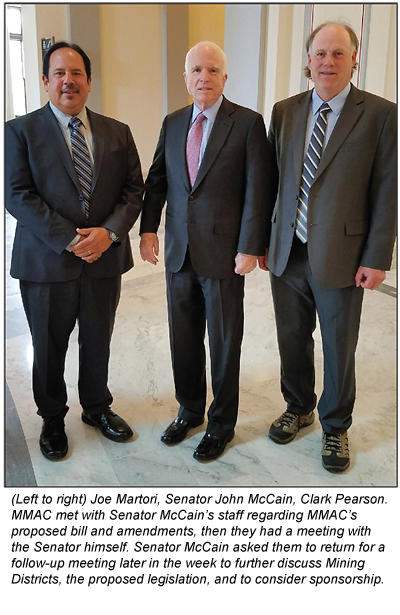 Pearson said the meetings were going better than they could have possibly hoped for so far. This is the third trip MMAC has made to DC this year, so some of the congressional staff members are gaining a better understanding of the current problems miners face and how MMAC-assisted Mining Districts can alleviate those problems.

Some of their scheduled meetings, which were expected to last 20-25 minutes each, went well beyond an hour because the Senators wanted to know exactly how Mining Districts work and how they can assist both small-scale and large-scale miners.

An organized, MMAC-assisted Mining District can obtain federal recognition if the proper steps are followed. (You can read a detailed explanation in the “MMAC Update” published in the April 2017 issue.)

One of the most common questions received from members of Congress is, “Who are my constituents?” They want to know who they are fighting for. This is a crucial part of the puzzle. Shortly after being elected, members of Congress are already focusing on re-election. They need to know they have your support. If you are part of a MMAC-assisted Mining District, please send a letter to MMAC so it can be delivered during these congressional meetings. You can address that letter to your Representative and Senators. You need to be polite and to the point. List the various problems you are having with access or other issues with federal, state or local agencies, and close the letter by asking them to support MMAC and their proposed bills and amendments. You can email the letter to info@mmacusa.org and it will be personally delivered on your behalf during one of our trips to DC.

If you are a claimholder and are not part of an organized, MMAC-assisted Mining District, you need to get moving so you are not left behind when these bills and amendments get passed. Review the “MMAC Update” article in our April 2017 issue on page 21 for instructions on modernizing your Mining District and contact MMAC if you need additional assistance. You can direct questions via email to info@mmacusa.org or give me a call at the Mining Journal if needed.

With the current President and makeup of Congress, we have a window of opportunity here that we may not see again for many years. Don’t let this opportunity pass you by.

We now have supporters who are well known and connected in Washington, DC, and who state they will assist us in bypassing lower level staffers and getting us face-to-face meetings with Senators.


The ESA has become an unwieldy beast that was hijacked by government agencies run amok, and by extreme environmental groups who saw it as a way to lock up public lands and to generate income through exaggerated claims and continuous lawsuits.

March 2017
This will provide the opportunity to meet with many of the members of Congress in a more informal setting at several meetings, luncheons and dinners. And we have been offered the chance to meet with President Trump’s staff.


The miner was drywashing using a small, gas-powered drywasher for a short period of time—maybe an hour—when he was asked by a ranger to see his permit, which is not required to prospect at this small of a scale.

We definitely got their undivided attention with our presentations. As a direct result of our presentations, the Desert Advisory Council recommended a Memorandum of Understanding be put together between the council and the Rand Mining District. This MOU was recently completed.