I was out with a few friends recently and we were finishing up the day detecting. We had been down in a low-lying area where many nuggets have been found. It was a tad early to go home, so we decided to split up when we came to the last hill that would take us up to the trail. 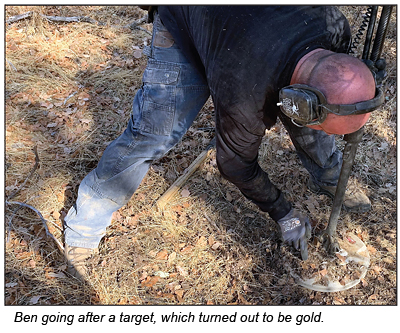 We already knew there was gold, and there should still be some nice pieces to be found on top. We separated and each took a gully that would eventually lead us to the top.

I went up the largest gully and had to stop because a large, fallen pine completely blocked any passage. If I went to the left to try and skirt around the deadfall, I would’ve been right behind and too close to the guys. I didn’t want to bother them with detector interference so I chose to find another path on the right side.

While looking around I saw a small and somewhat steep wash coming off of the slope. Going up this wash would take me to the wrong side of my gully. It would also take me to the top of a hill opposite where the guys were and our direction out.

I decided to do go up the wash. There was lots of quartz streaming down the hillside. As I neared the top, the ground started to level out some. Ahead, I could see where the ground dipped off the ridge line and was starting to form a reasonably-sized draw. As I got closer I could see some old diggings. There was a long and wide but shallow pit on top. 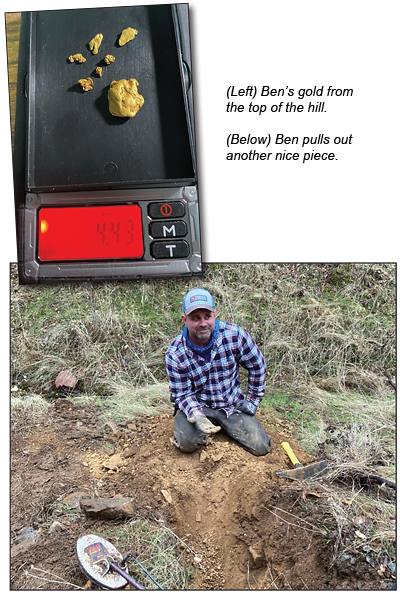 I went over it with my detector. I did not see any dig holes at all. In the first few minutes I dug up a few pieces of old, almost white lead and small bits of nails that were deep, rusted away and sounding good.

As I worked my way down I could see where the old-timers had this small pit bottlenecked. It appeared to me that this pit was used to hold water during the wet season.

Below the narrow outlet the ground had been worked by hand. I could see small and flattened rock piles scattered around. None of the rock was large, maybe a bit larger than my fist. This was normal for the area we had been detecting all day.

Just past the small area of handwork was the main gully. There were some large rock piles along both sides. These were large rocks—some a few hundred pounds—stacked as high as the miners were able to stack them.

There was some bedrock in the area that was exposed. In the worked area was a spot where a sluice run had been. Going up the slope from this digging, the bedrock was probably no more than twenty inches deep. One could clearly see what had been worked and the whole spot needed a once over. Finishing up with my sideline excursion, I continued up the left side of the gully and could hear the sounds of digging above me. After a few minutes of zig-zagging, I came out to a small clearing where I could see Ben.

I had heard some loud talking while I was coming up. Ben had found a nice, water-worn channel nugget in a trash area. It weighed in at 4.3 pennyweight. (Note: One troy ounce is equivalent to 20 pennyweight.)

Ben had also found several other pieces of gold in this same area. Chris heard me and came over. He had found a few small nuggets. I was still at zip.

I told them about the area that I had found and mentioned that we probably needed to hit it the following weekend. We got our gear together and headed out for the day.

The following Friday came around and it was just Ben and me. Walking in, we talked about where we were each going to hunt. Ben had a spot he wanted to finish up and I had another area to check out. Reaching our splitting off point, we each went our own way. I hunted and came up with a few small nuggets of about a gram or half a gram.

As it got close to lunch time I tried to call Ben and see what he was up to. After a few tries I was able to finally get to him. I couldn’t understand what he was saying at first. He was saying this and that and not in any way that could be understood. I finally told him to slow down.

Ben called me on my cellphone and told me he had found a new area. He said, “You have to come over here Ray.” 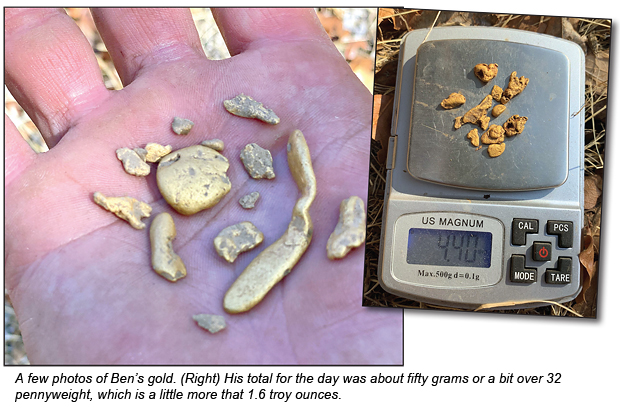 I told him where I was at and he gave me directions from there. Listening to him, it sounded like the same place I had located last week. I asked him if he had found anything and again he went back to babbling. I was finally able to understand that he had found a lot of pieces. I continually tell the guys how it was twenty years ago when gold was plentiful in many of these areas, but I was never sure that they believed me. Well, Ben had finally hit a spot that no one had been over with a detector. Still babbling, he shared that he had found over twenty or so nuggets.

“That’s great,” I replied, and then he excitedly added that he had found another ten or so larger nuggets.

I asked him how large. “Just get over here!” he demanded again.

I hung up and made my way over to Ben. Upon arrival at the location I could immediately see that it was the same place I had found a week earlier. Ben had wandered up the hill and come upon it.

I sat down and Ben started to show me his finds. He had a nice handful of smaller gold, and then he beamed, “Look at these pieces!”

Ben held up another vial and he shook it so I could hear the sound of heavy gold. He dumped the contents of his vial into my hand. He surely did have a great morning! 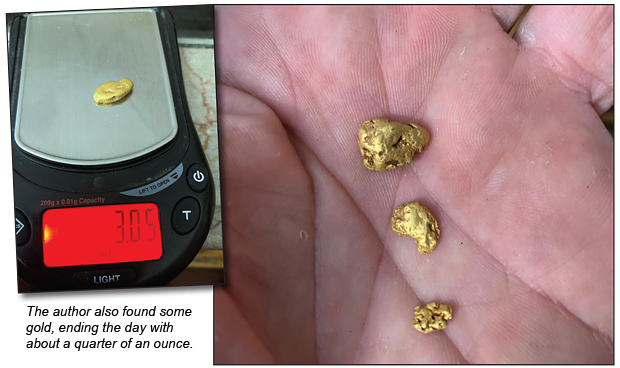 The larger nuggets were all old channel gold, smooth and water-worn. I guessed that a few of them would push a bit under one-half-ounce apiece. We took some pictures and played with the gold. Ben had a smile that could not have been knocked off of his face by anyone.

After a long break, we both went back to hunting. Ben found more nuggets, and I ended up with over a quarter of an ounce. What a great early Christmas gift!

My total was close to 14 grams or right at 9 pennyweight.

These old diggings did not look much different than many others we have encountered. It was a classic spot though. There was hardly any rock, and what was there was smaller, heavy, water-worn channel rock. Although a sluice run was present along with the diggings themselves, we were confident that no one had ever waived a detector over this area.

Keep your eyes open—gold is still out there.

I furiously started pulling material out of the side wall and putting it in my scoop. It didn't take long to discover that the source of the scream was from a one-ounce chunk...

The Essence of Gold Prospecting

When doing your initial armchair research and selecting potential areas to explore, consider all the indicators, both natural and man-made.

November 2012
The whole purpose of sampling mineralized ground is to measure the values in a small volume of material that would be representative of a much larger volume of similar material. The key word is representative. Chemical and fire assaying will not accurately represent placer deposits by themselves.

Perhaps the most notable thing about skim placers is that they form on the top surface of gravel bars, as opposed to coarser gold placers where the weight of the gold particles allows the gold to settle down on or near bedrock.

I began detecting at the bottom of the gully and started making my way upstream. About mid-way there was a nice, flat stretch for about ten feet.

Subscription Required:
The Bawl Mill   • Ask The Experts - Will a rare earth magnet work for finding gold deposits?   • Ask The Experts - Any at home tests for platinum/palladium?   • Ask The Experts - Should I use headphones or go without?   • Residual Placers: An Often Overlooked Gold Source   • USFS OKs Exploratory Drilling in Eastern Idaho   • A Short History of Hydraulic Mining in California   • Gold Basin & Mass Wasting   • How Far To The Gold?   • Gold Prospecting for Better or Worse: Warm Buttocks and Frozen Assets   • The Joys of Desert Prospecting   • Melman on Gold & Silver   • Mining Stock Quotes and Mineral & Metal Prices