On November 27, 2018, the US Supreme Court ruled unanimously that the US Department of Interior cannot designate critical habitat for a species when that species does not currently live there.

In 2001, the US Fish and Wildlife Service declared the dusky gopher frog endangered. After the Service was sued by environmental groups, the agency identified critical habitat in 2012 that included 1,544 acres in St. Tammany Parish, Louisiana, which the Service identified as Conservation Unit 1. The frogs did not occupy this habitat, and had not been seen in the state for 50 years. The property was rich in timber and the owner was leasing a portion of this land to Weyerhauser. While ponds are present on the property, there are no endangered frogs and the property lacks the "forest canopy" necessary for their survival. 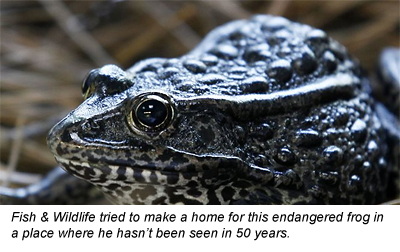 The property owner was told he could make changes to his property to make it suitable for the species at his own cost. One alternative proposal from the Service was for the Army Corps to deny a permit if one was requested, which would prohibit the landowner from using 60% of the property. He stood to lose around $34 million if he could no longer lease his property to harvest timber.

The Center for Biological Diversity and the Gulf Restoration Network intervened on behalf of the Service. . Correction: The landowners, with the exception of Weyerhauser, were represented by the Pacific Legal Foundation.

The 5th Circuit Court denied the request for an en banc (all seventeen judges) hearing even though six judges sided with dissenting Judge Owen. The case was appealed to the US Supreme Court.

The US Supreme Court considered two questions: (1) whether “critical habitat” under the ESA must also be habitat; and (2) whether a federal court may review an agency decision not to exclude a certain area from critical habitat because of the economic impact of such a designation.

In a unanimous opinion, the Court found:
1. An area is eligible for designation as critical habitat under §1533(a)(3)(A)(i) only if it is habitat for the species. That provision, the sole source of authority for critical-habit designations, states that when the Secretary lists a species as endangered he must also “designate any habitat of such species which is then considered to be critical habitat.” It does not authorize the Secretary to designate the area as critical habitat unless it is also habitat for the species. (Emphasis added.)

2. The Secretary’s decision not to exclude an area from critical habitat under §1533(b)(2) is subject to judicial review. (Emphasis added.)

The US Supreme Court decision was 8-0; debate and briefs took place before the appointment of Judge Kavanaugh, so he did not take part in the consideration or decision.

The 5th Circuit Court decision was vacated and remanded for reconsideration in light of the US Supreme Court ruling.

There is one other point I want to highlight. On page 13 of the US Supreme Court opinion, it states:
"Section 4(b)(2) states that the Secretary 'shall designate critical habitat . . . after taking into consideration the economic impact, the impact on national security, and any other relevant impact, of specifying any particular area as critical habitat...'" (Emphasis added.)

I've made numerous trips to Washington, DC, with Clark Pearson of Public Lands for the People (PLP). In fact, we will be returning to DC in January 2019, for another week of talks with influential members of the Senate, Forest Service and EPA. We are continuing to seek regulatory relief for small-scale miners across the United States.

During our previous trips we highlighted the importance of mining in terms of national security. America is completely dependent upon several nations who are not our friends or allies for supplies of critical and strategic minerals and metals and those supplies can be cut off in times of conflict. 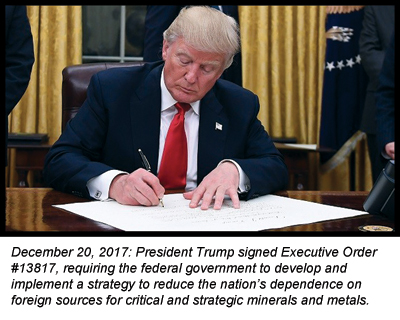 As a result of these efforts, along with those of the National Mining Association and American Mining and Exploration Association, critical and strategic minerals and metals were included in the National Defense Authorization Act.

On August 13, 2018, President Donald Trump signed the National Defense Authorization Act, which, for the first time, recognized critical and strategic minerals and metals as an essential part of our national defense.

Clark Pearson of PLP had this to say: "The Supreme Court case reaffirms PLP's legal and political stance and is a step in the right direction. The case reaffirms property rights rather than placing species over and above our rights. Our goal is to include the miner and mining claims as a matter of national security, whereby the agency must give deference to the needs of the miner over species when a conflict arises."

Congressman Paul Gosar (R-Arizona), Chairman of the Western Caucus, stated, "The Supreme Court ruling is a victory for the Constitution and private property rights. In an unanimous 8-0 ruling, the Court found the federal government has no authority to lock up private land for species that don’t habitat the land that is being locked up. In doing so, the Court wiped out the unconstitutional Court of Appeals decision and sent the case back to the 5th Circuit with specific instructions. The American people are tired of the land grabs, especially those from the previous administration. The Endangered Species Act is 45 years old and has a 3 percent recovery rate. It is far past time that Congress bring the ESA into the 21st Century, and addressing the numerous issues associated with critical habitat designations is something that should be on the table."

On the fence about subscribing? Want to check out a 3D sample issue?