Has Senator Harry Reid worn out his welcome?

Senator Majority Leader Harry Reid, once a staunch supporter of mining and a voice of reason when dealing with public lands issues, seems to have changed his tune.

As reported in our March issue, Reid not only supported S 22, the Omnibus Public Land Management Act, but also negotiated a compromise with several Republican Senators to avoid a filibuster.

The bill would have placed millions of additional acres off limits without debate. It also would have created the National Landscape Conservation System "in order to conserve, protect, and restore nationally significant landscapes that have outstanding cultural, ecological, and scientific values for the benefit of current and future generations..."

S 22 died in the House of Representatives when the Democratic majority called for a vote on the bill under a suspension of the rules. This allowed them to avoid any attempts by detractors to amend the bill, but it upped the requirements for passage to a two-thirds majority. The bill failed to garner a two-thirds majority, falling 2 votes short.

Today we learned from a report in the Congressional Quarterly that Senator Reid intends to reinstate the Omnibus Public Land Management Act and again avoid any serious debate on the bill. According to CQ, Reid stated he will "add the legislation to a separate House-passed bill (HR 146) that would authorize grants to protect historic battlefields." Because HR 146 is a bill that already passed by the House, the Senate Republicans would be unable to stop it with a procedural motion.

Senator Reid was able to balance environmental and mining issues as a public servant for over forty years. Now that his party is back in control, it appears his attitudes toward mining and public land use have changed. It might be time for us to look for a new voice of reason from the Great State of Nevada. He's up for re-election in 2010.

Make sure you let Senator Reid know that you will vote based on how he handles S 22/ HR 146. You can give him a call, send a fax or email, or show up at one of his offices for a bigger impact. 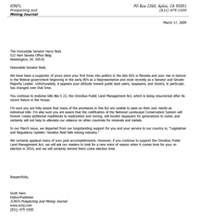