Bruce Johnson is the owner and operator of the Mid River RV Park along the Klamath River in northern California. He's also a suction dredger.

Bruce provided us with details on the local economic impact of SB 670, the Senate bill that halted suction gold dredge mining pending a new Environmental Impact Report. His comments also appeared in the Siskiyou Daily News in a two-part series, published January 18 and January 19, 2010.

This winter has been OK for me. I have picked up a few tenants for the winter time only. The real problem is that I have so few customers for this summer. Last year at this time I had every available space in my park reserved for the upcoming season. This year I have two of my 15 seasonal spaces reserved. I have lost three long-term, full-time tenants and fear that I will lose more because they are all miners. Additionally, one of these tenants operates a small scale mining business (Mid River Mining Supply); this business will soon become untenable. I am uncertain if I can keep my business alive. 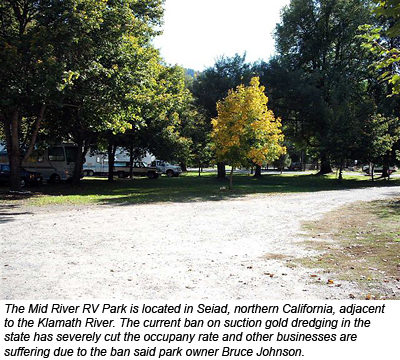 If my business fails, even though it is small, it will have a devastating effect on the community. I say this because my tenants support all the local businesses. Closing my business will have the most dramatic effect on the Seiad Café. Shanda keeps the café open nearly every day of the year. She makes her bills in the winter; in the summer she hopes to make her profit. If my park closes she will lose in excess of 150 meals served weekly. Her profit for working all year goes because the state has removed my clientele. How long would anybody be willing to operate a small business without profit or personal gain? The Seiad Store will not die off immediately; it will have a massive drop in revenues and profits. On narrow margins this will make owning and operating the store less desirable and eventually lead to its closure. The owner of the Seiad Mini Storage told me he has lost 10 dredgers since our beloved governor signed SB-670. I hate to think what’s happening to the people who own Quigley’s in Klamath River or the Rainbow Store in Hamburg. There will also be fewer people buying gas on the river. At best this will lead to higher prices at the Seiad Card Lock gas station. Worst case: they have to close. If they have to close that will mean that every member of this community will have to drive at least 20 miles for gas.

If I am forced, by the state of California’s removing my customer base, to close Mid River RV Park, it will also have an effect on downriver communities’ safety and insurance rates. I am a board member for the Seiad Valley Volunteer Fire Department (SVVFD). Annually the guests at my park contribute in excess of $2,500 to the SVVFD. These contributions help pay for things like insurance for the first responders as well as fire and aid vehicles. We have recently been able to upgrade our service to the point that home and property owners’ insurance rates have gone down. When the funds disappear, so will SVVFD and the current fire and medical coverage we provide. All people who own property and homes between the Scott River and Thompson Creek WILL suffer financially and could potentially suffer physical harm.

All of this will happen because somebody without a face or a name decided that someday someone who is operating a suction dredge looking for gold could potentially maybe cause harm to a salmon. The difference between words like “might” and “does” or “could” and “will” used to have a significant place in our decision-making process. No longer, apparently. It’s become a sad joke – nearly as big a joke as our governor and this state’s entire legislature, with the notable exception of those few who took a moment to think and decided not to implant their craniums shoulder deep in their rectums.

I am a originally from Washington state. I worked in Alaska in the commercial fishing industry in the 80s; in the 90s I worked for a national video store chain. While there I opened stores from Seattle to Atlanta. I left to return to Seattle and care for my ailing father. After my father passed away I came to California looking for gold and a change of lifestyle. I experienced some success at prospecting and kind of fell into Mid River RV Park. I have never experienced a more hostile state to do business in. Between the state, the eco-nuts and the Karuk tribe, there seems to be no room for business in Siskiyou County or the region.

Personally I am enraged that the Karuk tribal leadership is not representing its tribe’s wishes. All I hear from tribal members is that 95 percent of them don’t want a dredging ban. That 95 percent is their number. I don’t understand why the tribal membership accepts this. While SB-670 is a legislative attack, the Karuk tribe has forced litigation on us for years. The facts have gone before the courts repeatedly and the miners have won because suction dredging is the most effective and environmentally friendly method of small-scale mining. This is why the tribe likes to initiate lawsuits outside of this county – usually in or around Alameda County.

Suction dredging for gold actually helps the aquatic environment in many ways, most notably by removing heavy metals and releasing the biomass. Anyone who dredges in waters where fish are present knows fish love dredges. Operating a suction dredge allows us to remove naturally occurring heavy metals like mercury and introduced heavy metals like lead and auto debris. By doing this, dredgers improve the water quality. This improvement is shared by both fish and people.

So our wonderful governator signs SB-670 into law when gold prices are at the highest point in decades and the state is suffering from a $47 billion shortfall. The timing of this bill, ramrodded through to kill suction dredging mid-season makes no sense. To them, Arnie and the legislature, it’s of no consequence that the people they damage by passing this bill are the very ones who most need their help – the ones who are supplementing their income during this economic downturn. Or those who suction dredge for gold as their way of earning a living.

Many now get the distinct pleasure of joining the ranks of the unemployed. Just like the farmers all throughout this state, we are being robbed of the American. Dream. It seems that those who are fighting to save aquatic life have no feeling for land-dwelling hominids. The question is what happens if the state finds out this is like the spotted owl?

To me SB-670 proves how stupid the people who represent us in Sacramento are. To believe SB-670 is urgently necessary, one had to be convinced that:
If – and I stress the if – there is a decline in the number of returning salmon, clearly suction-dredging for gold must be the culprit. Yes, that’s sarcasm. I say this without malice towards the hard-working fishermen out there. I made a living from commercial fishing and have sport-fished for salmon for over 40 years. I believe in the concept of multiple use for our public lands and waterways.

So when Sen. Pat Wiggins proclaims, from her imitation palatial estate, that she has created a bill that will save the salmon, the legislature couldn’t wait to be part of saving something. Heaven forbid those pesky facts get in the way. So they jumped up and said save the salmon – even though the environment of the places they represent is mostly destroyed. They know what’s best for the flora and fauna of Siskiyou County.

The thing is, to my knowledge the state, Karuk tribe and eco-nuts have never demonstrated harm to any salmon. Years ago in Washington state, biologists and other representatives from the Washington Department of Fish and Game went so far as to evaluate the effects of and potential harm caused to freshwater oysters by suction-dredging for gold. They ran these oysters through a four-inch suction dredge multiple times and then apparently watched them in a kiddy wading pool. Ridiculous, I know, but they stated they could see no psychological damage and no apparent harm.

It is my opinion that the state legislature is trying to remove people from rural areas in an effort to move them into the city, making them more dependent on the “Nanny” state the Legislature is trying to create. By attacking the way an individual earns money, the state makes life along the Klamath River nearly impossible. The state, in combination with the eco-nuts and the Karuk tribe, have stopped most logging, made it so you can only retain hatchery fish, and have as of today killed suction-dredging for gold for the whole state. Remember, if it isn’t grown, it’s mined. I believe the state wants to make life so difficult for those of us who reject the urban lifestyle that we have no choice but to capitulate and move into the city.

All of this is happening while gold prices are at or near all-time highs. It could be argued, and I believe it to be true, that the representatives from the major urban centers are trying to deprive hard-working citizens of the right to explore for and collect precious metals and minerals. These rights are guaranteed all of us by federal law. I think if one looks closely at the legislature of this state and the mess they have created, it appears that they want the citizens of this state poor – the only exception being their elite cronies who want to tell us what to eat, how to think, and what vehicle we can drive with our seatbelts on because they know what’s best for everyone.

This is not freedom, it’s state control – and it’s wrong.