Crumb Hunting With A VLF Detector

I did something a little bit out of the ordinary this last weekend—I went crumb hunting.

One of my friends purchased a ten-acre lot that is part of a historical hydraulic mine here in Shasta County, California. He put us on some fun crumb hunting. For three days we all used VLF (very low frequency) detectors. I hadn’t done this for quite a while.

The property is the lower portion of an old hydraulic pit in Shasta County. The other parts of this old pit were washed off pretty well. The water lines coming into the pit were thirty inches wide. I don’t know what size monitors were used in the operation. I do know that this place was worked by the original founders, then by the Chinese, and once again during the Depression era. 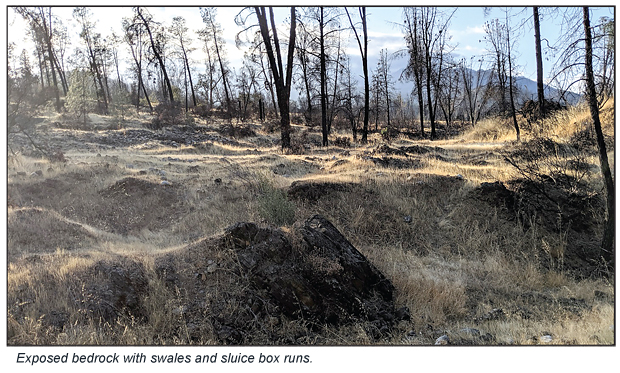 Shale bedrock is generally brown in this area. While driving along some roads you will see where the brown shale will begin to turn blue. This is an indication that the softer upper layer, usually about ten to twelve feet, was washed away or dug out until the blue shale was encountered. The same thing happened in this pit because of the massive amount of water that was used. The easily workable shale containing the gold was washed off until the hard blue shale was left, insuring that most of the gold was recovered, or at least sent on its way towards recovery.

What I just described was the main pit, but the area Ben bought was better ground. The area we detected appeared to have been just lightly washed and quite a bit of smaller gravels and clay were left behind.

The high points of the shale bedrock rise up at the most maybe eight feet above the somewhat flat bedrock. Because some of the swales are so high, lots of gold never reached the sluice raceways. Much of the gold was caught up in the hard shale bedrock.

The raceways in this area may go ten feet deep, whereas the raceways in the larger pit go forty feet deep with a few deeper than that. There are also lots of cobbles and hand-stacked rocks where we are at. The main pit is clean, swept, hard bedrock and a tough place to buy a crumb of gold. 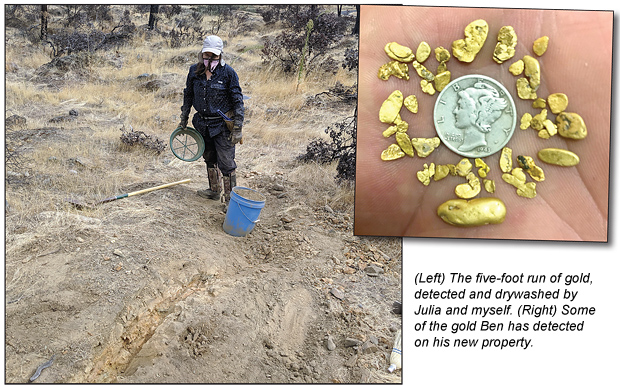 Ben and Chris got to detect the place first and were not quite sure what to expect. Chris got a nice target signal on the edge of rising bedrock, but still in a low, but washed area. After breaking up the bedrock, he recovered several pieces of gold amounting to almost three pennyweight.

Meanwhile, Ben was freelancing and picking up small pieces here and there. The ten-inch elliptical coil was being used by both guys. We later learned that using quality headphones with a small, round, five-inch coil performed great on this type of ground.

Once the weekend arrived we were out in force. I was able to find a small, fist-sized spot that was red and iron-stained along with clay. I recovered thirteen pieces from one little hole. I scraped the spot with my pick and the hole turned into a crevice about five feet long and six inches wide. The same type of material was present. I raked the material out of the miniature ditch and spread it out. Most of the pieces were very small. How small? You would need six pieces of gold to equal one grain—that’s a “grain,” not a “gram.” Yes, pretty tiny stuff. This is good every once in a while because you get your ears back in tune for the bigger detecting machines and the sounds you may hear.

Marty found a small, rising piece of broken bedrock and sat down to begin working his find. Almost all the gold in this area has been moved around, though some is right where it got deposited in the first place. Remember that as small as this gold is, much of it was stuck in the somewhat hard surface when originally worked. Now, after one hundred and fifty years or so, the surface has softened up and the gold is easier to get to. Because of this reasoning, my idea of using a drywasher sprang to life. There are many spots where you just need a spade to pick up the paydirt and put it into a bucket. There weren’t many small rocks to contend with.

Marty detected almost twenty tiny pieces of gold for his time on the small round top. I went in after him and detected another thirty or so crumbs.

While this was going on, Ben had detected a few nice beat-up melon seed-sized pieces of gold that were about two grams apiece. Chris had picked up some pieces that were worthy of the title “larger than crumbs.” 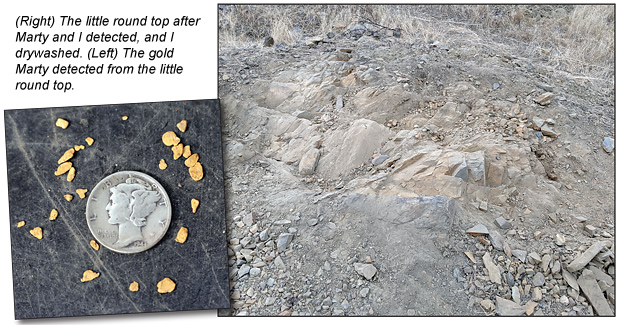 The next morning, Julia and I hit the small round top again. I brushed the bedrock somewhat clean and drywashed about three buckets of material that produced about two and half grams of finer gold.

Even after that I was still able to recover seven more crumbs with the detector. All told, about five or so grams came off the little roundtop. The actual area worked was maybe ten square feet—not too shabby. This type of detecting is time consuming, but also lots of fun.

All that is needed for this type of detecting is a VLF detector, pocketknife and an old chair cushion to sit on or place your knees on. Using a straw to blow away the fine dirt and dust is lots of fun when you are on your hands and knees and can hear a target but you cannot see the target. I think Julia was feeling sorry for me, watching me get up and down in short periods of time. The second day she brought the cushion out for me and I loved it. I think it’s one of those getting old things again; I keep seeing new ones every time I go out lately. 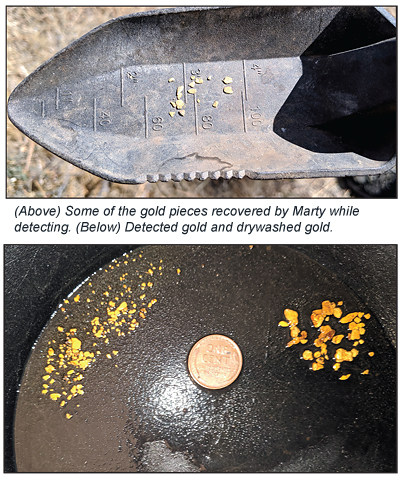 While out the second day, I showed the guys some things to look for. There were places that were worked from the top (not too well) down into a low spot (that had been cleaned up pretty well). Hunt the area where the material was being pushed down the slope.

Another scenario to watch for is where a bedrock seam is going across the area being washed. Slow down, hunt slowly and listen. Once that first piece is pulled from a spot like that, you may get a pleasant surprise of more crumbs to follow. Clay is always a catch-all as are any mineralized areas crossing the bedrock. Porphyry is a favorite.

Watch for indicators also. Heavies such as hematite, ironstone, black sand lines, greenstone and junk metal are great clues to watch for.

Another thing you should be conscious of is the fact that recovering crumbs is time-consuming, and if the sun is out you will get sunburned staying crunched down in the same position repeatedly. You notice I used the word crunched, not hunched.

Get out and find some gold.

How to Beat the Heat--and The Bedrock

The pit was a classic one—exposed shale bedrock with all the material being washed out one end of the pit. Within a few minutes I had a nice mellow signal that was in open ground.

This rock had been with a family for many years and they were cleaning up an old workshop that had lots of minerals and miscellaneous “ore” samples.

My wife Fran and I were brushing and repairing the road to our claim when we were interrupted by a fellow in a pretty yellow Jeep heading out to the local town of Quincy, California.

Tips and Tricks: Preparing Your Dredge Engine for Storage

Over the years, I’ve proved to myself over and over again that I don’t have to wait many weeks after rains before I head out to the goldfields to do some gold digging.

Today, the greatest gold rushes occur due to technological advances capable of discovering gold where it once was extremely unlikely or difficult.

Subscription Required:
The Bawl Mill   • Ask The Experts - Seeking advice on setting up an operation and the agreement with the landowner   • Montana Gold and Sapphires Revisited   • A Third Generation Small-Scale Hardrock Revival   • Gold Prospecting for Better or Worse: Respect the Angle of Repose   • The Summer of ‘81   • The “Chuck It Out” Nugget   • High Sulfidation Epithermal Deposits   • Gold and Silver Deposits of Bodie, California   • Melman on Gold & Silver   • Mining Stock Quotes and Mineral & Metal Prices